Rise of the charter schools 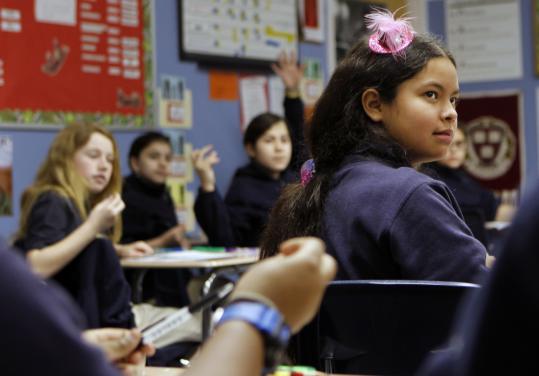 As the students filed through the front door of Excel Academy Charter School, the principal greeted each one by name. She shook hands and inspected their uniforms — dark blue polo shirts and khakis — before allowing the next student inside.

“Socks?’’ Komal Bhasin, the principal at the East Boston middle school, asked one boy, who lifted up each pant leg, revealing the requisite dark pair.

Strict discipline, along with high expectations and intensive instruction, is a hallmark at Excel Academy and other Boston charter schools that are seeking to open nearly a dozen additional campuses across the city in the next few years.

The expansions, which state education officials will decide on this month, are shaping up to be the most aggressive growth of these independent public schools in at least a decade. Boston has emerged as the hottest market for new charter schools under a state law enacted last year that encourages the doubling of charter school seats in school districts with the lowest state standardized test scores.

Of the 20 proposals for new charter schools, 12 seek to locate in Boston. The Boston applications aim to create more than 6,000 seats over the next five years, but the state law caps new seats in the city at about 4,500 — meaning state education officials will have to reject some applications even if the proposals have merit.

Some schools, if approved by the state Board of Elementary and Secondary Education on Feb. 28, could open this fall, and several are already mailing pamphlets and applications to prospective students across the city.

Behind most of the proposals are four current Boston charter schools — all with high MCAS scores and popular among families of color — that are attempting to create their own network of schools. Two other proposals have been filed by new would-be charter school operators, while another is being pursued by a national operator.

“It is a surge in growth unlike any we have ever seen,’’ said Paul Grogan, president of the Boston Foundation, a charitable organization that urged the state to let more charter schools open. “We have a very strong cadre of charter schools that are proven providers and ready to expand.’’

The additional campuses should be a boon for parents who are dissatisfied with their local school systems — thousands of Bay State students are on charter school waiting lists. But the expansion is likely to come at the expense of local school districts, which lose thousands of dollars in state aid for each student who leaves for a charter school.

And as charter school operators open additional campuses, questions are emerging about whether they can achieve the same success at multiple schools as they have at a single school.

The state is turning to high-performing charter schools to close a persistent achievement gap among students of different racial and economic backgrounds, a task that has challenged urban school districts. Across Massachusetts, about 27,000 additional charter school seats could be created.

Mitchell Chester, the state’s commissioner of elementary and secondary education, will make recommendations in the coming weeks to his agency’s board on which proposals should be approved. The board will vote only on those proposals with a favorable recommendation.

“I know a lot of folks are anxious to see what we bring forward,’’ Chester said. “We will only bring forward applications that are high quality. I’m hopeful that many, if not most, of them will meet that high bar.’’

Created under the 1993 Education Reform Act, charter schools are independent public institutions that are supposed to provide innovative educational alternatives to traditional public schools. They operate with fewer restrictions from the state and almost never have teachers unions, enabling charter schools to run extended school days and experiment with new, promising programs.

The records at several of the Boston charter schools — which enroll high numbers of African-American, Latino, and low-income students — are impressive, often besting affluent suburban schools.

On the English and math tests of the Massachusetts Comprehensive Assessment System last spring, eighth-graders at the Edward Brooke Charter School, a K-8 program in Roslindale, ranked first in the state, while Excel eighth-graders ranked fifth on English and fourth on math.

Across the state, many of the state’s 63 charter schools are academic standouts, but others perform below state averages and the state has closed a few of them. Boston currently has 14 independently run charter schools.

“We don’t want to leave any student behind,’’ Bhasin said in an interview at Excel, located in a former bank loan processing center adjacent to a . “Closing the achievement gap is the civil rights issue of our time. We are passionate about that.’’

Leaders of the Boston charter schools seeking to open additional campuses attribute their success to hard work. Most students, they say, enter their schools academically behind their grade levels, often by two or three years, causing the schools to devote much energy to tutoring and remediation in the early years.

To squeeze in all the subject matter, the charter schools typically run an extended day that nets students about 378 more hours of instruction annually than their peers in the Boston school system, according to a Boston Foundation report last year.

All the while, the charter schools try to inspire each student to go to college. Each homeroom at these schools is named after a college, either the alma mater of a teacher or of a former student.

On a recent tour of the Edward Brooke Charter School, housed in a former girls’ Catholic high school, school leaders attempted to debunk the myth that charter schools are “MCAS drill factories,’’ saying they teach material that goes well beyond that covered by the standardized test.

“These kids will leave our school at the end of the eighth grade able to compete with Newton and Wellesley,’’ said Jon Clark, a co-director of the school, which is seeking state approval for three additional campuses in Boston.

In the classrooms, teachers did not post MCAS questions or test-taking tips on the walls. Instead, they strung banners predicting each class’s graduation from college, such as the “Class of 2021’’ for the sixth grade, and a poster of the school’s core values: focus, integrity, respect, self-determination, and teamwork.

Critics of charter schools — including many teachers unions, school committee members, and superintendents statewide — discount their academic accomplishments, arguing that they recruit more academically motivated students while ignoring students who get special education or lack fluency in English.

“I remain concerned about their unwillingness or inability to teach or welcome all children, especially special education and English language learners,’’ said Richard Stutman, president of the Boston Teachers Union. “It’s a major problem. It’s unfair to the entire city that charter schools can single out and educate a carved-out niche of students, and it’s a violation of the public trust because they get public funds but don’t have to educate all of the public.’’

Although charter schools deny such accusations, the new state law requires them to strive to enroll students who reflect the demographics of the areas they serve. (Charter schools admit students through a lottery.)

As charter schools seek to expand, the Boston school system is in the midst of overhauling many of its schools and programs in hopes of keeping its students and attracting new ones.

“We have an obligation to provide a great education in our system, not necessarily to compete with charter schools,’’ said Michael Goar, Boston’s deputy superintendent. “We want to be the school system of preference and not [of] default.’’

But Yuberkis Calderon pulled her 11-year-old son, Joshua Polanco Calderon, out of the Tobin K-8 School in Roxbury last year, after school district officials revealed that it had among the lowest MCAS scores in the city.

Joshua is now a student at the nearby Roxbury Prep Charter School, where he was recognized for academic achievement at a schoolwide community meeting recently. Roxbury Prep, located on the third floor of a Mission Hill nursing home, is seeking state approval to open three more middle schools and a high school.

“My mom decided I should go to a more challenging school,’’ Joshua said in an interview, as his mother, who speaks little English, listened. “She just wanted me to have the best education. She loves this school because it has a lot of energy.’’

Joshua, who says he spends about three hours a night doing homework, added, “It’s hard work, but it’s worth it.’’