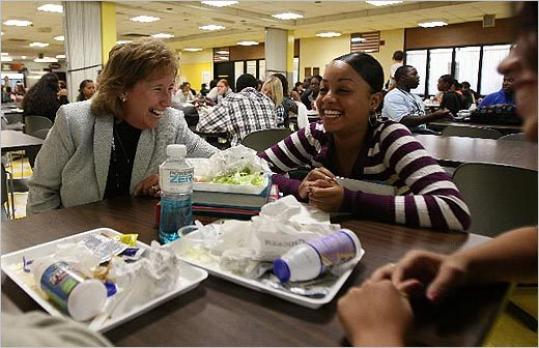 BROCKTON - Brockton High School has every excuse for failure, serving a city plagued by crime, poverty, housing foreclosures, and homelessness.

Almost two-thirds of the students qualify for free or reduced-price lunches, and 14 percent are learning to speak English. More than two-thirds are African-American or Latino - groups that have lagged behind their peers across the state on standardized tests.

But Brockton High, by far the state’s largest public high school with 4,200 students, has found a success in recent years that has eluded many of the state’s urban schools: MCAS scores are soaring, earning the school state recognition as a symbol of urban hope.

This year for the first time, standardized test results for all student groups - whether based on race, ethnicity, or other characteristics - met or exceeded improvement goals set under the seven-year-old federal No Child Left Behind Act.

“To me, Brockton High is evidence that schools that serve diverse populations can be high achieving schools,’’ said Mitchell Chester, state commissioner of elementary and secondary education. “It’s just very graphically ingrained in my mind after having walked through the building and gone into classes that there’s a culture of respect among students and adults . . . You don’t see that in every school.’’

The genesis of the school’s turnaround was a moment of despair in 1998, when the first set of MCAS scores showed 44 percent of 10th-graders failing English and 75 percent failing math. Administrators quickly assembled a committee that devised a schoolwide strategy to ensure that every student would know how to write coherently, read for understanding, speak eloquently, and reason logically.

As part of the plan, every teacher would have to teach those skills the same way. It proved controversial, but when teachers complained, administrators simply slid the MCAS scores in front of them and asked: “Are we satisfied with that?’’

Today, “literacy charts,’’ which outline the essential elements of the four skills, hang in every classroom - even in the swimming pool area. Although students often roll their eyes at the repeated calls by teachers to work on these skills - one girl said she spent a physical education class writing about exercising rather than doing it - they don’t dispute that the strategy works. With MCAS placing a strong focus on most of those skills, students said they are well prepared for the exam.

“Taking the MCAS was like second nature,’’ said Tercia Motta, 17, a Brazilian immigrant who learned to speak English in elementary school and had near-perfect scores this past spring on the exam. “We all thought MCAS was relatively easy, but I think that’s because of all the pressure that was placed on us.’’

In English, scores this year at Brockton High rivaled the statewide average: 78 percent of 10th-graders scored advanced or proficient - the top two of four categories - compared with 79 percent statewide. Although math scores lag behind the state average by 15 percentage points, the 60 percent of students who scored advanced or proficient was considerably higher than the 7 percent who did so 11 years ago.

At the school’s heart is a deeply held sense of community spirit among staff and students that has endured over the decades, even as the city’s demographics have shifted considerably with an infusion of new residents.

Located just beyond the gas stations, supermarkets, and fast-food eateries along Route 123, Brockton High appears more like a sprawling California school complex than an urban high school. Its nine buildings stretch for a third of a mile, about the length of an aircraft carrier.

On Friday nights in autumn, students, faculty, parents, and other city residents pack the football stands to cheer on the Boxers as the band and cheerleaders enhance the mood. . The scene impressed the city’s new superintendent, Matthew Malone, a former headmaster of Monument High School in South Boston.

“It’s a piece of Americana,’’ Malone said. “There’s so much pride and spirit in what it means to be a Boxer. You don’t see that in a lot of other urban high schools.’’

Inside the concrete complex, few signs exist of a typical urban high school. There are no metal detectors at the doors, no graffiti sprayed on the walls, no smashed-in lockers. Students appear to be well behaved and well mannered, greeting strangers with eye contact and a handshake.

Overseeing much of the overhaul has been Susan Szachowicz, the school’s principal. Szachowicz grew up in Brockton and was in the first class that graduated from the current high school complex in 1971. She returned four years later as a teacher and left briefly to work at a college. Szachowicz, who holds a doctorate, is known affectionately by her students as “Dr. Zack.’’

In many ways, Szachowicz is the school’s biggest cheerleader. Each year, she and the staff put on a variety show to reward students with good grades, and they go all out. Last year, staff impersonated various recording artists. Szachowicz went as a hip-hop singer, donning an oversized T-shirt and baggy jeans while wearing a baseball cap sideways. She dubbed herself “D-Z’’ - a moniker that has stuck with students this year.

She chalks up the school’s success to hard work, not some kind of secret formula.

“If there was a magic program, we would all buy it,’’ said Szachowicz.

Beyond the literacy initiative and tinkering with academic programs, however, something far more organic is driving the school’s success. Teachers and administrators, many with roots in Brockton, often take a personal interest in their students, creating a cozy atmosphere in the sprawling complex and providing trusted voices when students confront crises. The school places its students in one of four academic houses, where they remain all four years for core subjects, helping to make the school feel smaller.

Brockton High does lose many of its students, but not as many as other urban districts. According to the most recent state statistics, almost 14 percent of the class of 2008 quit school before graduation, compared with 22 percent in Boston and 28 percent in Springfield.

Vannessa Suarez, a 16-year-old junior, has been fighting to avoid becoming one of those statistics. She paid less attention to academics the spring of her freshman year after her brother was charged with manslaughter in the death of one of her friends. The shooting traumatized her; it also shocked Brockton High, where the victim and the accused were well-regarded students.

Suarez fell about a semester behind, but she managed to do well this past spring on the MCAS - scoring proficient, one notch above passing, on the English, math, and science exams. Suarez credits the support she received from teachers and staff with helping her through the ordeal.

“When I grew up, people would always give up on me,’’ said Suarez, who added that Brockton High teachers never did. “They were always there for me. I wouldn’t leave Brockton High in a heartbeat.’’

Other triumphs over adversity abound.

When Terrance Chaplin was a freshman, he frequently skipped school. On the days he did show up, he said he often talked back at teachers and sometimes was high on marijuana. He had to repeat his freshman year.

Chaplin, who requires small-group instruction and lots of hands-on activities under his special education plan, smartened up in his sophomore year, he said. This past spring, he scored proficient on MCAS, bolstering his desire to become a veterinarian someday.

“A lot of my teachers pushed me,’’ said Chaplin, adding that the support made him want to prove that he could improve. “I’m grateful for that. If they hadn’t pushed me I probably would be in the same routine as my freshman year.’’