But school chief plans to move other facilities 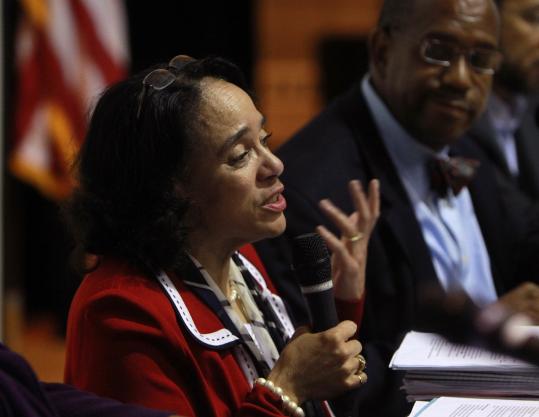 Boston school Superintendent Carol R. Johnson is abandoning her controversial proposal to move Boston Latin Academy to Hyde Park, but is pursuing location changes for several other schools, under a revised plan that she is set to present tonight.

Elements of the new plan, which will affect at least a half a dozen schools, came to light yesterday morning when Johnson shared some details with more than 100 teachers who turned out for the Boston Teachers Union’s annual conference in Quincy, according to a teacher and a union official who attended.

During her opening remarks, the two attendees said, Johnson said that Latin Academy would stay at its current location and not move to the recently closed Hyde Park High School.

She also said that Boston Arts Academy, which under her original facilities proposal in July was to relocate to the Latin Academy building, would remain in the Fenway building it shares with Fenway High School - but would expand to take over the entire building. That, in turn, would send Fenway High elsewhere in a series of other location changes.

The new proposal, which is scheduled to be presented at tonight’s School Committee meeting, pleased many at Latin Academy who had protested the proposed move to Hyde Park.

But Smelansky, who believes Latin Academy needs new science labs and other upgrades, said he also hopes “there will be a plan to invest in this school and solve existing problems.’’

Johnson’s reversal on relocating Latin Academy adds to a growing list of her proposals that have fallen apart under public scrutiny. In each instance, Johnson has said she simply is being responsive to community concerns, but the start-and-stop approach has frustrated some supporters and has raised questions about the level of research and public engagement that has gone into developing the proposals.

In the case of Latin Academy, students, teachers, parents, and alumni analyzed blueprints and other documents that raised a critical question: How can Latin Academy’s more than 1,700 students fit into Hyde Park High, which was designed for 1,100?

The question prompted Johnson to tour Hyde Park High on Labor Day in search of answers and to pull back the proposal for further analysis.

Johnson, through a spokesman, declined to comment yesterday afternoon.

“The superintendent is not commenting on the facilities proposal until she has the opportunity to communicate directly with families,’’ Matthew Wilder said in an e-mail.

He also added, “I would just caution that what was shared [in the conference meeting yesterday] is not the complete plan.’’

The Globe learned of parts of the proposal yesterday morning, after obtaining an e-mail written by a teacher at the conference who detailed the changes for colleagues. That teacher, who was later contacted by the Globe, asked to remain anonymous. Richard Stutman, the teachers union president who also was at the conference, confirmed details at the Globe’s request.

Other pieces of the proposal that Johnson shared with teachers yesterday called for Fenway High School to move into a building in Roxbury currently occupied by Mission Hill K-8 School and New Mission High School.

New Mission High School would then relocate to the old Hyde Park High building and would be joined by another high school, Boston Community Leadership Academy, which currently shares space in Brighton with Another Course to College.

The relocations would allow Boston Arts, Fenway High, New Mission High, Community Leadership Academy, and Another Course to College - all of which have long waiting lists - to expand.

The future of Mission Hill K-8 was not clear, but a letter from the school’s headmaster on its website yesterday told parents that a new location for the school might be announced tonight.

Linda Nathan, co-headmaster at Boston Arts, told the Globe Friday that her school was staying in the Fenway, but that Fenway High School would be moving to Mission Hill. She expressed mixed feelings about not moving into the Latin Academy facility.

“Our community is disappointed,’’ Nathan said. “We were really excited about the potential the [original] proposal offered, but we appreciate the opportunity to stay at our current location.’’

Remaining in the Fenway facility has a drawback, Nathan said. Boston Arts would still not have enough space to add a long-planned-for middle school.

A major catalyst for the facility changes was finding a new use for Hyde Park High, which the School Department shut down in June as part of a budget-cutting measure.

The Massachusetts School Building Authority, which is covering 90 percent of the costs of a $41 million renovation of that school about a decade ago, warned the School Department this summer that it could stop reimbursements for the project and might seek to recoup past payments for closing the building prematurely.

The authority also has warned the city it may take similar action at several other closed schools that were renovated over the last 20 years. The School Department is expected to file a reuse plan with the authority next month.

In July Johnson proposed relocating Latin Academy to Hyde Park, as part of an effort to expand some high schools. She thought Latin Academy would be receptive to the move because parents had raised concerns about their deteriorating building, located at the Roxbury-Dorchester line near Grove Hall.

But many staff, parents, students, and alumni orchestrated a spirited campaign to stay. Parents said they simply wanted the building’s problems fixed.

The protesting, which included at least one rally and a student sit-in at Latin Academy, came to a quiet halt shortly after the School Department said on Oct. 11 that Johnson would not be presenting a revised facility proposal the next night as planned because she needed more time.

The School Department asked opponents through a message delivered via a Latin Academy administrator to “stand down’’ and that they would be happy with what the superintendent would recommend. Opponents soon posted a note on their website that said “it appears that everyone’s hard work has finally paid off and our goal has been achieved’’ and asked supporters to stop activities.

“It seems like a reasonable plan for consideration and to bring to parents for reaction,“ said Tyler after the Globe shared details. “It seems well thought out.’’

But at a time when thousands of seats remain empty in city schools and with more students expected to depart for charter schools, he questioned whether the expansions might mean other schools would have to close to reduce capacity.