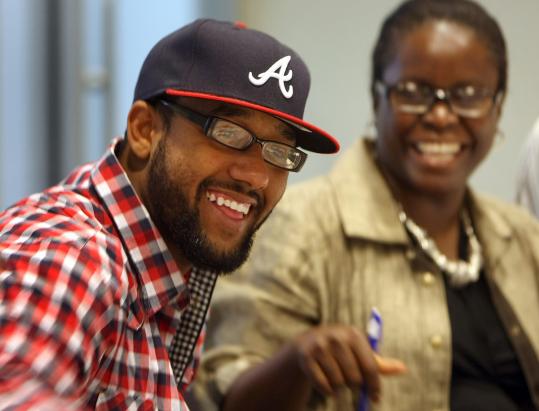 Two years after a study showed that most Boston public school graduates who go on to college fail to earn diplomas, Massachusetts colleges and universities are mobilizing to try to keep students from dropping out.

Twenty-five schools are planning to implement new strategies - more scholarships, for example, and free summer sessions to ease the transition into college life - as part of Success Boston, a citywide initiative that aims to double the number of local students who earn degrees.

Keith Motley, the University of Massachusetts Boston chancellor who brought the schools together to analyze their dropout problems and coordinate solutions, said their plans were two years in the making.

“The academy is slow. We pontificate. We study,’’ Motley said. “Everybody has to have an opinion, and we all think for a very long time before we do things.’’

The 25 institutions - a wide swath including Boston College and Boston, Northeastern, and Tufts universities, as well as 13 other private colleges and eight state schools - started surveying their Boston public school graduates in 2009. They found that many students at state universities, community colleges, and less selective private schools are underprepared academically and struggling to find support.

Many of the students arrive on campus with little experience writing papers or with poor study habits. Some 75 percent of those at Bunker Hill Community College and 70 percent at Roxbury Community College need to take two to five remedial classes before they can start courses counting toward a diploma.

“What we’ve learned . . . is that we can’t even assume students who need help have the confidence to ask for it or the ability to use it well,’’ said Joan Becker, associate vice provost at UMass Boston and one of the authors of a new report on the problem, “Getting Through.’’

The report proposes strategies that could ease those burdens, from starting transitional classes while students are still in high school to teaching time-management skills once students are in college.

Four of the 25 schools are also piloting “learning communities,’’ in which students interested in specific topics all take the same classes, and in some cases live together. Jan Bonanno, dean of student affairs at Bunker Hill, said there are already early signs that students enrolled in its learning communities are more likely to graduate on time.

“We want to make it reasonable for them to work 15 to 20 hours a week,’’ Becker said. “The key is making sure it’s employment that sets them on a career trajectory rather than just putting money in their pocket.’’

Becker is also leading an effort to simplify and clarify information about financial aid. This past spring, aid directors at most of the 25 colleges agreed to put fliers into their student information packages that make it easier to compare offers across institutions.

Many of the schools already rely on Success Boston counselors to serve as case managers for students at high risk of dropping out, helping them navigate unexpected complications, from lost green cards to flagging commitment.

The latter was a problem for Steven Carmona, 20, of Roslindale, who dropped out of Bunker Hill last year. “I was in college because my parents wanted me to be. I didn’t see it as something for me, and I wasn’t motivated, so I stopped going to class,’’ he said. After a stint working long hours at the airport, though, he decided to try again - with an assist from his Success Boston counselor, Danny Rivera.

“I was a little reluctant to help him, because I felt like, ‘Man, I’ve invested a lot of time in you already, and the return hasn’t been there,’ ’’ said Rivera. “But I believe in redemption. I believe in people learning from their mistakes. So I said, ‘Meet me on campus. Let’s do this.’ And he did.’’

With Rivera’s help, Carmona persuaded Bunker Hill to reinstate him as a student this year. “It’s a long process, though,’’ Carmona said. “I can’t celebrate yet.’’

Nor can any of the schools. All the new programs except one - Boston University’s - require additional funding, which may be hard to come by in a time of already tight budgets.

But some of the initiatives can be implemented, at least in part, with money the colleges already have.

That is by design, said Becker: “We wanted to push people to think, ‘What can you do now?’ ’’

The schools’ increased focus on the dropout problem mirrors a national trend, said Jennifer Engle, director of higher education policy and research at the Education Trust, a nonprofit.

“I think there used to be a sink-or-swim mentality in higher education - a feeling among faculty that part of their job is to weed out students who don’t belong there, and that if you support a student all the way through, that’s hand-holding,’’ Engle said. “Schools are starting to realize that they have to play a role in helping their students succeed.’’

About 37 million Americans - 20 percent of the workforce - have some college credit but no degree to show for it.

The colleges’ proposals come after a separate new analysis estimating that students who started college in 2002 but eventually dropped out cost the nation overall $4.5 billion in lost wages and tax revenues last year. In Massachusetts, according to the analysis, students who enrolled in 2002 could have earned $104 million more in 2010 had they completed their degrees, generating an extra $15 million in federal tax revenues and $5 million in state taxes.

“States are making this enormous investment year after year after year in kids who drop out,’’ said Mark Schneider, who co-authored the analysis for the nonprofit American Institutes for Research. “It’s crazy. These numbers should be a wake-up call.’’