Districts are giving up some control in exchange for fresh ideas 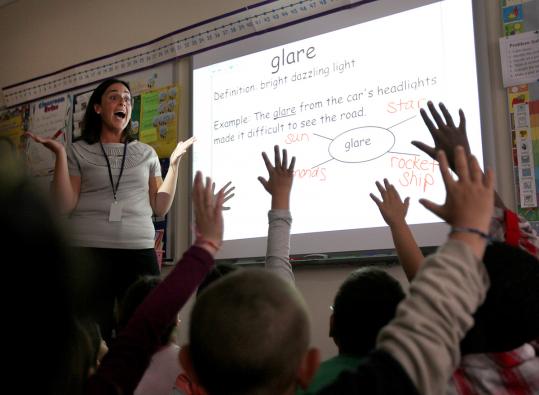 A growing number of school districts from Boston to Western Massachusetts are embracing a new kind of school to pursue educational innovations and compete more aggressively with charter schools.

About a dozen “innovation schools’’ are expected to open this fall, while another dozen should arrive a year later. The movement follows the launch of the state’s first three innovation schools this past school year.

“It’s really catching fire,’’ said Paul Reville, the state’s education secretary. “I would predict innovation schools in a relatively short period of time could surpass the number of charter schools in the state if the growth continues at the rate we’ve seen recently.’’

Innovation schools - a cornerstone of Governor Deval Patrick’s overhaul of public education - are part of the state’s efforts to create schools that operate with more autonomy than traditional public schools.

Innovation schools and the state’s 56 independently run charter schools are similar in that decisions about curriculum, staffing, and budgeting are made by a school-based governing board with the goal of crafting programs that meet the specific needs of their students.

But unlike charter schools, which report directly to the state, innovation schools must negotiate the extent of the freedom to make their own decisions with the superintendent and School Committee, and are bound by most provisions of the district’s teachers union contract.

The schools offer parents another educational option for their children, and the opportunity to help build a new school from the ground up.

The three school districts that tested the concept this past school year were able to create innovation schools with unique focuses.

Taking advantage of a new school building, Revere launched the state’s first innovation school, the Paul Revere Innovation School, where programs cater to the emotional and social well-being of students, most of whom live in poverty.

The Mahar Regional School District used the model to create a college-preparatory high school at Mount Wachusett Community College in Gardner, while Greenfield launched a K-8 school that operates almost entirely in cyberspace.

The flurry of activity has pleased the Patrick administration and some key legislators, who wondered whether districts would allow schools much autonomy after an earlier attempt in the late-1990s fizzled.

Reville and other state education leaders hope the innovation schools will attain similar success as many of the charter schools, which have some of the highest MCAS scores and lengthy waiting lists for students to gain admittance.

School districts also have a big financial stake in making innovation schools work. Should these prove popular among parents, fewer students - and the education aid that supports them - might ultimately leave the districts for a charter school.

Students who leave their hometown district for a charter school take with them thousands of dollars in state aid.

The state, in an effort to close achievement gaps among students of different socioeconomic backgrounds, enacted the January 2010 law that allowed the creation of innovation schools. That law also calls for doubling the number of charter school seats in districts with the lowest state standardized test scores.

The timing of the law worked perfectly in Revere, as it prepared to open a new building for its Paul Revere Elementary School. Superintendent Paul Dakin said he approached the school’s principal and staff about converting the Paul Revere into an innovation school and they agreed.

“I see renewed energy in this school,’’ Dakin said as he strolled through the lobby, where the tile floor depicts Paul Revere’s famous ride, one morning last month. “They have a challenging student population.’’

The school has extended its day to allow for more tutoring and arts programs.

“I couldn’t be happier with what they have learned,’’ said Pauline Perno, who has three children at the school. “The school has a stronger sense of community.’’

The state has been offering planning grants up to $15,000, covered by federal Race to the Top money, to prod districts into exploring innovation schools.

Districts are either creating innovation schools from scratch or converting existing schools.

As part of its transformation into an innovation school for 2012, Carlton Elementary School in Salem is creating multiage classrooms that will allow students to advance at their own rate.

Students also will be eligible to enter school as soon as they turn 5.

“We are valuing the individual child,’’ said Jean-Marie Kahn, the school’s principal. “There are a lot of reasons why it might take a child a longer or shorter period of time to achieve the standards. . It erases the stigma of being held back.’’

The level of activity is what many state education leaders envisioned in 1997 when they made their first push for school districts to run autonomous schools.

At that time, the Legislature amended the charter school statute so school districts could open their own charter schools with approval from the state Board of Education.

Just seven in-district charter schools are in operation now, although three will open this fall, including two in Boston.

By contrast, school committees have ultimate authority in approving innovation schools, but converting an existing school into one requires a faculty vote.

So far Worcester appears to be the most enamored with innovation schools; it is preparing to open five in the fall.

In Boston, the Roger Clap Elementary School will become the city’s first innovation school, which will intertwine its curriculum with the history of its Dorchester neighborhood and will offer an extended learning day.

The city also is developing seven other proposals, including a bilingual high school and an arts-focused K-8 school.

“The innovation model allows us to look at some existing schools and really make changes that will help kids in those buildings,’’ said Ann Waterman Roy, the School Department’s director of strategic planning.

The innovation schools are similar to the city’s pilot schools, which Boston started with the support of the teachers union in the mid-1990s to compete against charter schools.

Richard Stutman, the union president, said the union supports the concept of innovation schools but questions to what extent the quality of education differs at innovation, pilot, charter, and traditional schools.

“Part of this is designed to fool people and to offer them a menu of schools that look different but are actually similar,’’ Stutman said. “The quality of teaching is essentially the same among all the schools.’’

“We hope the innovation schools are successful and we think the competition that they provide will make all of our schools, innovation and charter, better,’’ Kenen said. “When parents have choice, they force schools to continuously look for ways to improve and to keep students at their schools.’’