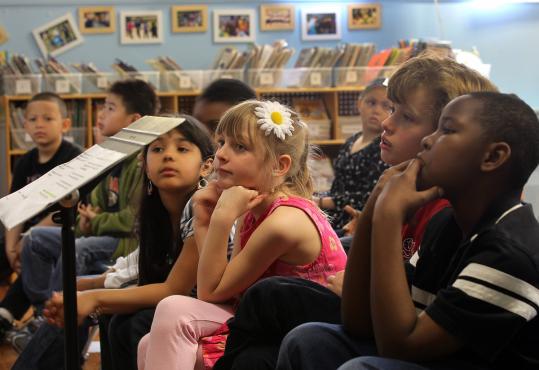 Second-graders listened to a presentation on snakes at the Conservatory Lab Charter School in Brighton recently. Its teachers were the first among the state’s charter schools to unionize. (David L. Ryan/ Globe Staff)
By James Vaznis Globe Staff / June 6, 2011

Teachers at the first charter school in Massachusetts to form a union are now debating whether to dissolve it, dealing a potential blow to an effort to unionize charter schools statewide.

Three years ago, when teachers at Brighton’s Conservatory Lab Charter School formed a union, the elementary school quickly became a poster child for the American Federation of Teachers Massachusetts, the state’s second-largest teachers union, which had launched a charter-school unionization campaign.

The development stunned and embarrassed charter school supporters, who had long seen unions as antithetical to the very idea of these independent public schools, which rarely employ union teachers. They argued that it was the absence of unions at charter schools that allowed administrators to make quick changes to staffing and scheduling in the pursuit of innovation.

But now Conservatory Lab is facing dwindling union interest among its teachers and growing frustration over its affiliation with the federation, which frequently attacks the academic accomplishments of charter schools and last year tried unsuccessfully to block an aggressive expansion of these schools.

The teachers are weighing whether to stay affiliated with the federation or join a professional teacher group that is not a union organization. A decision is expected by the end of the month.

In many ways, the waning commitment reflects a fundamental challenge for the federation in organizing charter schools: Teacher turnover at these schools is typically high and new hires may not embrace a union, causing support to quickly dry up.

Almost all the teachers who established Conservatory Lab’s union have subsequently departed the elementary school, and now the union struggles with low attendance at membership meetings, said Becca Iskric, the union’s vice president and temporary president.

At least two teachers quit the union this year, a significant loss for a school with about 10 classroom teachers and 150 students, Iskric said.

“Our little school may not be an AFT member that long,’’ said Iskric, who joined Conservatory Lab a year after teachers unionized.

Many teachers have mixed feelings about having a union, Iskric said. While many see merit in having a contract — establishing a forum to discuss issues with administration and standards for pay, evaluations, and scheduling — some teachers feel the federation sometimes appears more interested in pushing its own agenda than tending to the needs of such a tiny school, Iskric said.

For instance, Iskric said, the federation recently defied the wishes of the school union and met with the principal to push for unionizing several part-time orchestra instructors. They were hired as part of a highly regarded international music program, El Sistema, that started this year.

The teachers are more interested in focusing on pay and scheduling than waging a battle over expanding membership, Iskric said.

The federation, which features a story on its website about the Conservatory Lab teachers who founded the union, has also tried enlisting the union teachers to mobilize other charter schools to start unions.

“You get in bed with a large organization, and they may want you to do certain things,’’ Iskric said. “If they are trying to woo charter people and make us the poster child, there has to be more of a connection between what we want and need, but we are not sure what we want.’’

Thomas Gosnell, the federation’s president, said on Friday he did not know Conservatory Lab teachers were considering a dissolution, although he said he was aware they were having some internal issues. Regardless of the outcome, he said, the federation — which represents teachers in several urban districts, including Boston — will continue organizing charter schools.

The state has 63 charter schools, educating more than 27,000 students and employing about 1,500 teachers.

Across the nation, 604 charter schools, or 12 percent, operate with unions, and more than half of them must do so under state laws, according to data compiled for the last school year by the National Alliance for Public Charter Schools, a nonprofit advocacy organization.

Charter school supporters have long been suspicious about the federation’s desire to unionize the independent schools.

Unions have been fierce critics of charter schools, which began opening in Massachusetts in the mid-1990s. Unions often characterize the schools as an attempt to boot union teachers out of public education.

Unions often blame the need for staffing reductions on the way charter schools are funded: Massachusetts students who leave a school district bring thousands of dollars in state aid to their charter school.

Charter school supporters say districts no longer need the money because they have fewer students to educate, but unions and superintendents argue the state aid losses are much steeper than districts can afford.

Unions also question the academic records of charter schools, accusing them of skimming the best students — an accusation disputed by charter school supporters, noting students are enrolled by lottery.

“How can a group that has been so critical and not want the existence of charter schools now want to unionize teachers — what is their real motive?’’ said Kevin Andrews, president of the Massachusetts Charter Public School Association. “Is their motive to destroy charter schools from the inside?’’

Federation officials say their motive is the same one that drove teachers in school districts to unionize decades ago: Every worker deserves fair pay, due process, and other workplace protections.

At Conservatory Lab, teachers quietly launched their union drive in the fall of 2008, seeking a stronger voice in school decision-making and equitable standards for pay and performance reviews, and they quickly received state certification.

Diana Lam, the school’s new principal — who dealt with unions as superintendent in Chelsea, Providence, and other districts — said she was stunned when she received a letter from the state about the union’s creation but took the development in stride.

“Here at Conservatory Lab we used [the unionization] as an opportunity to really craft a groundbreaking contract that honors our unique vision of a music-infused school,’’ Lam said in an interview last month.

The resulting contract, signed in fall 2009, garnered national attention for its brevity, just 10 pages, and its establishment of a merit-based pay scale instead of guaranteed annual pay raises, prompting charter school administrators to issue a press release.

Federation and school union officials also were pleased, especially about the inclusion of “just cause’’ language for staffing terminations, a common feature in union contracts but a sharp departure from charter school practices in which teachers work on individual one-year contracts.

Iskric said the federation played an instrumental role helping to negotiate the contract.

“The AFT gave us a lot of muscle to negotiate our first contract, and we got a lot of advice,’’ Iskric said.

Although charter school supporters feared a union agreement could jeopardize Conservatory Lab’s ability to experiment with new programs, innovation appears to be flourishing at the school. In addition to El Sistema, Conservatory Lab has expanded project-based learning and is adding a sixth grade this fall.

In many ways the union has been working out, Iskric said, but the federation’s sharp criticism of charter schools creates unease.