Parents shut out of Boston pre-K classes despair, while others rejoice in top picks 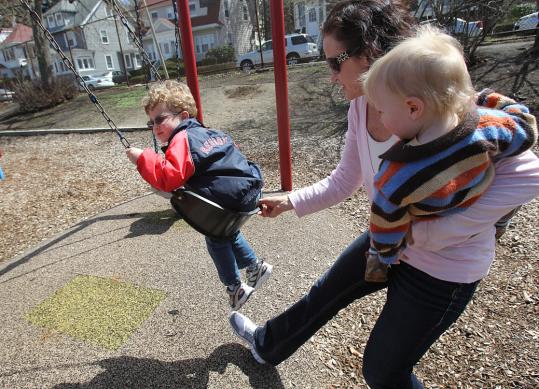 Chief Jasaad Rogers of Roxbury, like his brother before him, had lousy luck in the Boston public schools lottery. Not only was the 4-year-old shut out of the schools his parents wanted; he did not win a prekindergarten seat in any school at all. His parents, who both work full time, were left with few options besides paying for him to go somewhere else.

In West Roxbury, Debra Brendemuehl hit the jackpot, though she did not necessarily need full-day schooling for her 4-year-old, Brendan. (“They’re not kids forever,’’ she reasoned.)

She entered the lottery because she knew the only way to get him into the neighborhood’s highly sought-after schools was to apply when he was 4. The strat egy worked: He won a spot at one of the city’s most competitive schools, the Lyndon in West Roxbury, which he can attend through eighth grade.

Two Boston children. Two drastically different outcomes. Chief was one of the 514 4-year-olds, about 23 percent of those who applied, who were denied entry to prekindergarten classes in the Boston public school system last month. Of the many complexities of the city’s school assignment system, it is this central inequity that can inflame the most passionate anger, that the city can pay for many but not all of its 4-year-olds to go to school.

Not only does it mean that some taxpayers receive a free education for their children a year earlier than others, but those who enroll at 4 claim many of the best kindergarten seats the next year, leaving lottery losers with little chance of getting into the city’s best schools. Like a bruising round of musical chairs, the system lets 4-year-olds who scrambled into the best seats crowd out the later arrivals.

“I cried all weekend,’’ said Danielle O’Brien of West Roxbury, who learned last month that her daughter was not assigned to a prekindergarten class. Her husband found her reaction a bit extreme, she admits. “He was like, ‘OK, you’re like acting like a crazy person.’ But this is our daughter’s life and this is our life, too. Because now we’ve got to pay $5,000 or $6,000 a year for 10 years. That’s a lot of money.’’

Children can enter the school system at age 4 or 5 through a lottery system designed to ensure that even those who live near the city’s underperforming schools have a chance to get into some of the most coveted classrooms.

While all 5-year-olds who apply win a seat, if not necessarily at the school of their choice, the 4-year-olds each spring must compete for a growing but limited number of openings. Policy makers have long argued that early education is the best time to invest in children to prevent later difficulties; gains are particularly significant for disadvantaged children. But who gets into the prekindergarten, or K-1, classes is based on luck, not need. Only now is the mayor focusing resources on expanding access in the city’s poorest neighborhoods.

“Who did they want to attend, and are they getting those people?’’ asked Courtney Barth, a Roslindale mother. “Are they achieving what they wanted to, or are they just allowing people who otherwise might be going into a private preschool program to get free preschool?’’

Barth was not counting on free preschool for her son; he attends a day-care at $14,000 a year. Still, she entered the lottery for 4-year-olds, and Sam’s rejection left her in a panic.

“I’ve got to tell you my anxiety of somebody else getting in and I didn’t,’’ said Barth. “Oh, my God, my child’s education career is now in the toilet because he didn’t get into K-1!’ That’s your first inclination when you get that letter. It’s a ridiculous thought. But it’s that visceral reaction when you open it.’’

Her son eventually got into kindergarten in her area, albeit in her ninth-choice school, and she is content with the outcome.

Boston’s decision to provide a full-day education, for free, to 4-year-olds and even some 3-year-olds is somewhat unusual. Since he was elected, Mayor Thomas M. Menino has been trying to expand early education offerings, first, by extending half-day kindergarten to a full-day schedule and, later, by adding full-day school for 4-year-olds.

“It’s something we do because we believe in it,’’ Menino said in an interview, while acknowledging the pitfalls of uneven generosity. “It’s been a good and a bad experience. K-1 parents enjoy it, but we don’t have enough seats to satisfy people.’’

Five years ago, the mayor pledged to offer every 4-year-old a seat in school by 2010, but his ambitions fell victim to the economic decline. He ultimately scaled back his plan and reached out for help to the private sector. In his January State of the City address, Menino said he aimed to double K-1 offerings in the poorest neighborhoods within five years, with the help of nonprofits and business donors.

But he makes no promises about a time frame for educating all 4-year-olds. “We’re going to continue to try to make [seats] available,’’ Menino said. “But I’m not going to say I’ll have it done in a year or two.’’

In the meantime, hundreds of families will be turned away by the Boston public schools. Some will try again in less competitive schools that could not fill their classrooms; the district should have enough seats to accommodate 88 percent of applicants.

But many will give up, as did the parents of the Rogers boys, who have had better luck outside the Boston system. Chief’s older brother, Jaiyere, who has been attending Mission Grammar, a Catholic school in Roxbury, is expected to attend second grade in Lincoln through the Metco program, which sends urban students to suburban schools. Chief ultimately got into a charter school in Boston. That means their father may be spared the cost of two private school tuitions, if not the guilt of fleeing city schools.

“I know that these schools could benefit from having a parent that’s more involved, but the cost of that is my son has to soak in the problems of a decaying society,’’ said Jeff Rogers. “I can’t pay that price. I can afford that even less than I can afford $4,000 for Mission Grammar.’’

The mayor maintains that a large part of the problem is hype: Parents flock to the schools that develop a good reputation and overlook the others. He points in particular to the high-demand Kilmer School, an elementary school in West Roxbury that has been flooded with applicants in recent years. With only 44 seats available for 4-year-olds in the fall, 254 families ranked the Kilmer their first, second, or third choice for a school.

Ten of those schools — the Kilmer, Roosevelt, Young Achievers, Eliot, Bradley, Boston Teachers Union, Hale, Mozart, Perry, and Hernandez — had no spots for kindergartners because they were completely filled by returning 4-year-olds. Yet 301 families chose one of those 10 schools as their top choice. All were denied.