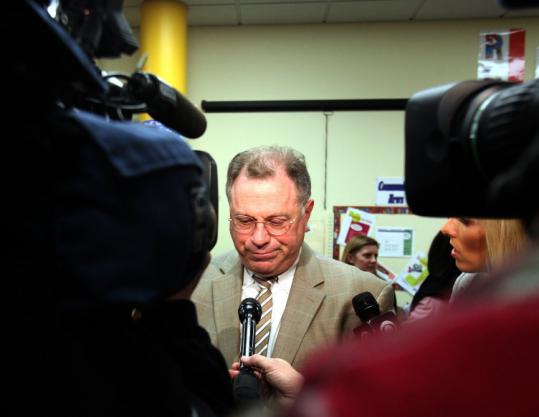 Sweeping changes are underway at many of the state’s 35 underperforming schools, a year after Massachusetts launched a multimillion-dollar overhaul.

On Friday, Lawrence informed 27 teachers at the city’s two underperforming schools that they would not be returning next fall, according to the union.

Schools are also turning to innovative and more technologically savvy approaches to teaching. Fall River’s Kuss Middle School has given every seventh-grader a laptop, Lynn’s Harrington Elementary School is teaching parents to speak English so they can help their children with homework, and several Boston schools have enlisted City Year volunteers to tutor and mentor students.

So far, Massachusetts has approved overhaul plans for nearly all the underperforming schools, and 28 have qualified for more than $1 million in federal school improvement funds. About a dozen schools, mostly in Boston, were the first to get their plans in place by last fall, state officials said.

Local and state officials are eager to see whether the changes will boost scores on this spring’s Massachusetts Comprehensive Assessment System exams. Schools must execute a dramatic turnaround in scores by the end of the 2012-13 school year or they could face a state takeover.

“I’m feeling a tremendous sense of momentum from these schools,’’ said Paul Reville, the state’s education secretary. “I’m encouraged. It’s a lot of hard work ahead. There are no magical cures.’’

In an attempt to close persistent achievement gaps among students of different backgrounds, the state declared 35 schools as underperforming in March 2010, just two months after a new state law gave superintendents and principals extraordinary powers to make staffing and other changes at such schools.

Twelve schools are in Boston, 10 are in Springfield, and the rest are in Fall River, Holyoke, Lawrence, Lowell, Lynn, New Bedford, and Worcester.

The effort is among the most ambitious ever undertaken by Massachusetts to turn around chronically failing schools, an area the state has had limited success in.

Superintendents and union leaders in several districts initially clashed over plans to overhaul schools, often because school districts wanted to pay teachers less than what was outlined in their contracts for additional time to teach, train, and prepare lessons.

The issues proved so polarizing that contractual changes for teachers at about two dozen underperforming schools in Boston, Springfield, Worcester, and Fall River had to be resolved through an expedited arbitration process that was put into place under last year’s state law.

It was unclear last week to what extent unions or superintendents prevailed in the process, but in Boston last summer the school district paid teachers less for their extra time than what the union sought.

While union representatives say teachers are committed to trying new approaches to accelerate student achievement, the broad ability of superintendents and principals to change staffing remains a concern.

“They don’t like an unnecessary turning of staff,’’ said Richard Stutman, the Boston Teachers Union president, of his membership.

Last spring, Boston refused to let more than 100 teachers at about a half dozen underperforming schools keep their positions there, forcing most to find jobs at the city’s other schools.

This year, a number of teachers at English High School are being pushed out along with teachers at some other underperforming schools, Stutman said.

“Our priority is to turn these schools around so students can have the education they deserve,’’ Barnes said. “Sometimes that means finding a teacher who is a better fit for the school at this point in time.’’

At emotional gatherings Friday in Lawrence, teachers at Arlington Elementary School and South Lawrence East Middle School gathered in their respective cafeterias after dismissal, according to a union official. An administrator called all teachers by name to the front of the room and handed them sealed envelopes after they signed for it. Teachers then returned to their classrooms to see whether their envelope contained a notice not to return in the fall.

“It was gloomy,’’ said Frank McLaughlin, the Lawrence Teachers Union president, who observed the proceedings at Arlington Elementary. “People should not be treated this way. They were treated poorly and in a shabby manner.’’

McLaughlin said teachers will, in spite of the disappointing news, continue to work with vigor, commitment, and professionalism. As in Boston, most of the Lawrence teachers are expected to transfer to other schools.

Lawrence Superintendent Mary Lou Bergeron could not be reached for comment.

In several districts, superintendents have been reluctant to ask teachers to reapply for their jobs.

“We are not in the business of throwing away excellent teachers,’’ said Catherine Latham, superintendent in Lynn, which has two underperforming elementary schools.

The state, as part of its review of the overhaul plans, is spending at least two and a half days at each school this year. About a third of the schools, mostly in Boston, have been visited so far.

Evidence already indicates that some underperforming schools face greater challenges than others.

Last month, Mitchell Chester, the commissioner of elementary and secondary education, expressed concern about the ability of Fall River and Holyoke to turn around their underperforming schools as well as bolster student achievement at their other schools.

If those districts fail to show significant improvement in the next year, Chester told his agency’s board, he may recommend that the state intervene directly.

Meg Mayo-Brown, the Fall River superintendent, said in an interview last week that Chester’s words were unfortunate and appeared to run contradictory to a recent state review of the district, which she said found notable improvements in many areas.

The commissioner’s comments, Mayo-Brown said, have “eroded some sense of public confidence that we were able to build in the last year or two.’’

Holyoke’s superintendent, David , did not return phone calls. In a statement he issued a day after the commissioner’s comments he faulted the state for not providing the city with enough money to help cover the multimillion-dollar overhauls of its schools.

State officials had feared that parents would pull their children out of underperforming schools in droves. But overall enrollment is up by a thousand at the schools, which collectively serve 18,000 students, said Karla Brooks Baehr, the state’s deputy education commissioner who is overseeing school district improvements.

The overhaul of two underperforming schools in Worcester appears to be gaining traction, said Jeff Mulqueen, the city’s chief academic officer, who expects to see double digit increases in student results over the next three years.

But at the end of that time frame, Mulqueen said, he expects more work will remain in pushing these schools forward.

“We are working hard, but we are not working miracles.’’