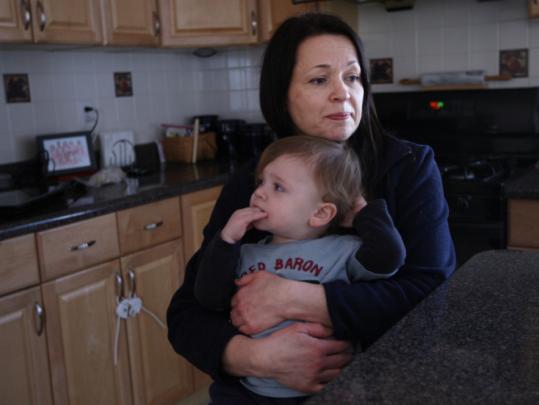 Theresa Strang with her son, Eamonn. Strang moved from West Roxbury to Natick after her 4-year-old did not get into pre-kindergarten last year. (Bill Greene/Globe Staff)
By Stephanie Ebbert Globe Staff / March 13, 2011
Text size – +

In towns across America, families buy homes knowing exactly where their kids will go to school. Like their post office, their parish, and their neighborhood pub, it’s usually the closest one.

There is little drama in the process: The school district sends a letter. The parents send in paperwork. The child shows up in the fall.

But in the Boston public schools, kindergarten registration can be a saga that plays out from the time a child is 3.

Because the quality of schools varies dramatically, the district uses a lottery to give all families, regardless of their neighborhood, a chance of getting into one of the best classrooms.

But that means every student is forced to compete for a spot — and the results depend a good deal on luck. Parents choose their favorite schools, but there’s no guarantee their child will be assigned there. Last year, 244 incoming 5-year-olds — about 7 percent — got none of their choices. Nearly half of them left the city school system.

This so-called controlled choice method of student assignment is designed to give families a choice among schools, but frustrated parents say it gives them very little control.

“It’s like, ‘Come check out all the schools so you can pick one that you love and not get it,’ ’’ said Denise Kitty-Rousell, a mother of two in Roslindale whose daughter did not get assigned to any pre-kindergarten last year. “It’s kind of ridiculous.’’

Boston is not the only district to use a lottery for student assignment — San Francisco, Minneapolis, and even neighboring Cambridge use a similar process.

The city is divided into three zones and families are, for the most part, required to apply to schools in their zone. All 5-year-olds are guaranteed a seat at a public school, if not necessarily one they choose. Four-year-olds can apply, too, but they might not win a seat anywhere. Free, full-day pre-kindergarten is available in some schools. But the district has seats for less than 60 percent of the 4-year-olds who want them.

School officials, worried that families fixate on a few popular schools, urge parents to explore all their options on the district website, which features school profiles and test scores, and to attend a showcase of schools during the fall before their children apply. Schools also hold open houses at which parents can tour classrooms and meet principals.

The options are many: A few schools have two-way bilingual programs; most don’t. Other schools have gyms; many don’t. Some extend to eighth grade while others end at fifth, sending families into another lottery to win placement in middle school.

Michael and Melissa Curran of Dorchester often took time off from work to tour school open houses, visiting 15 or 16 between them. They were seeking a good school that offers day care before and after school and were pleasantly surprised to find 10 they like.

Once parents have done their homework, they begin the registration process. Some paperwork can be filled out online but they still need to physically visit one of the district’s three Family Resource Centers with documents, including three that prove their address.

Then the district determines how many spots are available in each classroom. Kindergarten classes are limited to 22 children. But in some schools, those seats are already filled by the lucky 4-year-olds who got into pre-kindergarten the previous year. They can keep their seats if they want them, and at the popular schools, they almost always do.

Take the Kilmer School in West Roxbury, so desirable that 154 families requested it as their first, second, or third choice for kindergarten last year. Last year, Kilmer’s two kindergarten classes had not a single seat available. Every 4-year-old reclaimed the spot won the year before, according to Boston School Department data.

After the number of available seats has been calculated, the School Department assigns each student a random number.

That’s where luck comes in: That number will serve as a tie-breaker between students with the same priority vying for the same school. And it will determine their placement on wait lists.

The lottery weights each student’s chances of getting into a school based on his connection to it. The highest priority goes to students who have a sibling in a school and live within a mile, in its so-called walk zone. The next priority goes to those with a sibling in the school. Then come those in the walk zone who do not have siblings at the school; and finally, those outside the walk zone without siblings in the school.

The walk-zone priority gives an advantage, but not a guarantee of getting into a particular school. Once half of the school is filled with walk-zone students, the rest of the seats are open to those from outside the walk zone who are seeking an alternative to their own neighborhood schools.

When everything is ready, a button is pushed and a computer works its magic.

The program sorts through the list of students based on priorities for each school and fits each into the highest-choice school available. The first assigned to schools will initially get their choices.

But students with a higher priority may come after them and bump them from the assignment.

“We try to give you your highest-ranking choice for the priority that you have,’’ said Jerry Burrell, director of enrollment planning and support.

The final assignments are not made until the program has considered every student.

In this way, the academic paths of some 3,500 children, all 4- and 5-year-olds, are decided within five minutes. Additional lottery rounds are held in the spring for late-comers and for those who want to try their odds again at different schools.

It can take a week for parents to receive news of their child’s assignment in the mail — a delay that causes considerable anxiety for some.

“We would be sitting at ballet talking about it and everybody is getting physically sick thinking of making the call to find out,’’ said Theresa Strang, whose 4-year-old was shut out of pre-kindergarten last year.

The mailer asks families to decide by April 15 if they will accept the school assignment or decline it, and whether to stay on waiting lists for their top three schools.

But only about half the students’ families respond by the end of the school year, said Burrell. That leaves the district uncertain who will show up in the fall and parents mulling their options all summer long. Families make backup plans and pay nonrefundable registration fees to private schools, rather than gambling on moving up wait lists.

The district waits until August to call families to ask their intentions, and even then, some hedge their bets, said Burrell. Often, the families that get their top choices and have alternate options are the ones that procrastinate, he said.

“They’re playing all of their cards,’’ he said. “They hold onto that until the very last minute, into the fall, when school opens.’’

It’s a high-stakes game, with everyone waiting for someone else to move. School officials won’t give away a seat until a student fails to show up for eight days of school. Then the district begins offering spots to students on the wait list — a process that can continue into January.

“This should not be so emotionally draining,’’ said Strang, who ultimately moved to Natick. “It’s not like we’re waiting for a letter from Harvard.’’