Taking bully by the horns

With the law on the books, it’s time to get all on the antibully page 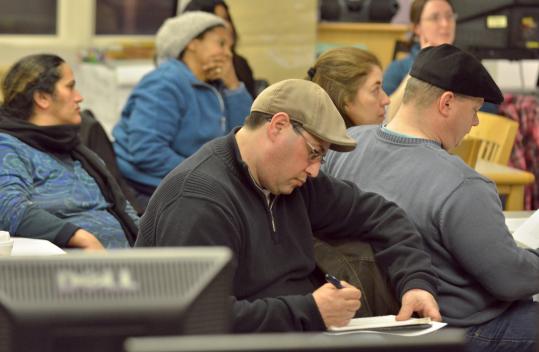 MALDEN — Parents gathered in the library at Salemwood School for a lesson on bullying prevention were asked to answer three questions:

What is your biggest concern on the subject? What question do you have about bullying? What do you hope to learn?

“We want to make sure we’re all on the same page about this important issue,’’ said Manjula Karamcheti, director of guidance for the Malden public schools, addressing about 60 parents of elementary school students.

The state’s new antibullying law requires school districts to develop a plan to keep kids safe. A plan must define bullying of both the physical and cyber varieties, outline procedures to report either, and identify training for teachers and staff, including bus drivers, cafeteria workers, and coaches. Lesson plans to teach kids about healthy relationships must also be identified for students in grades kindergarten to 12.

Most local school districts are now starting to roll out the plans, which were due to the state Department of Education on Dec. 31. “It’s going to take ongoing implementation,’’ said Danvers School Superintendent Lisa Dana. Each plan “has to become part of the school culture.’’

The state is reviewing those plans now. But some districts have more work to do. The department expects to complete its review of district plans by tomorrow, when the state Board of Elementary and Secondary Education meets in Malden. Districts that did not address at least one-fourth of the required elements will be notified, a state spokesman said.

The law was passed in May 2010 after two Western Massachusetts teenagers committed suicide after being bullied at school. Attorney General Martha Coakley, head of a state commission to prevent bullying, this month held public hearings in Boston and Springfield to gauge public opinion about the impact of the law. A report will be made to the Legislature in June, her spokeswoman said.

The new law does not make bullying a crime. But it does require school administrators to report to police any act of bullying that violates the law, such as assault and battery. “Bullying would be the motivation for the crime,’’ said Middlesex District Attorney Gerard T. Leone Jr. “You would look at the intent of the person doing the bullying. We would ask, ‘Why did this young person hit another young person? Was it a one-time beef, or repeated behavior?’ ’’

Area school officials say the new reporting requirements should help ensure that kids are safe in school. “No one takes this lightly,’’ said Malden Assistant School Superintendent Nancy Kassabian, who helped to write that district’s plan. “If something is going on in the school, it will be addressed.’’

A review of local school districts’ plans show a range of antibullying curriculum outlines, geared for specific age groups. In Marblehead, middle schoolers must take an Internet safety course in seventh and eighth grades. Swampscott High School students are trained as Mentors in Violence Prevention, to teach elementary students not to be bystanders to bullying.

But at a time of tight school budgets, some educators wonder how they’ll fund the antibullying courses.

“This is another requirement that we are not given funds directly for,’’ said Bernard Creeden, superintendent of the Tri-Town School Union, which includes elementary schools in Boxford, Middleton and Topsfield. “There certainly is a cost for scheduling on a weekly basis.’’

“It can present funding issues,’’ agreed Dana, the Danvers superintendent. “Fortunately, at the moment, we have it as part’’ of the health curriculum. “If it had to come out of our school budget, something else would have to go.’’

Both Tri-Town and Danvers are using the Olweus Bullying Prevention Program, a curriculum developed in Norway, now widely used in US schools through the nonprofit Hazelden Foundation. “It’s a program that clearly defines bullying in terms kids can understand,’’ Dana said.

In Malden, the district plans to use two curriculums, Steps to Respect, which targets bullying, and the Great Body Shop, a health education program, in grades k-8. Malden High will include antibullying talks in health class, according to the plan.

Parent outreach is also required in Malden’s plan. At the Salemwood meeting, parents received an overview of the training teachers have received. “It’s very user-friendly,’’ School Committee Member Adam Weldai told parents. “It’s not just the words that matter. It’s the spirit behind the words. We’re going to do everything we can to make sure your children are safe in our buildings.’’

Parents, particularly those who said their children had been bullied, think the meetings are necessary. “Don’t you think we should do more of these meetings?’’ asked Dean Skiffington, 49, who said his son was bullied for years by a classmate who has since left the school. “This should be drilled into the heads of parents. If not, bullying is just going to happen again and again.’’

Avanda White, a mother of three, believes parents must do their part, too. She said she recently stopped listening to talk radio in the car because of its heated rhetoric. She hopes she’s set an example for her kids.

“We have to ask ourselves how we as adults model behavior,’’ said White, 46, a former teacher. “But there are lots of ways that we as parents can spread the message of respect.’’

The repeated use by one or more student(s) of a written, verbal, or electronic expression or a physical act or gesture, or any combination thereof, directed at a victim that: