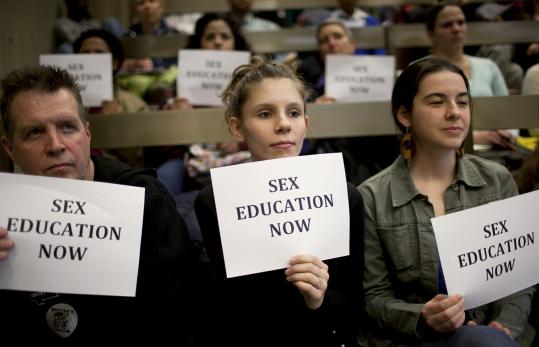 Students held black-and-white signs with that declaration during a 2 1/2-hour hearing as they pressed the city to bolster sex education programs in public high schools, including making condoms more widely available.

Many of the adults in the room, including Councilor Ayanna Pressley, who called the hearing, said it was a crucial step toward letting the students know that their concerns have not gone unheard and progress is being made to bring about change.

“There is no controversy when it comes to the fundamental question at the heart of today’s hearing,’’ Pressley said. “Not taking action — now that would be controversial. It would also be cowardly.’’

But not everyone in the room agreed with the sentiment.

Maggie McLean, a graduate student at Harvard, said she, too, is concerned with “the current hookup culture’’ of many high school students “but distributing condoms is not the solution.’’

McLean, also a member of Pure at Heart, a nonprofit of young Catholic adults, said students need a sex-education program that gives them “the tools to resist a culture of casual sexual activity presented in the media. Please make sure that sex-ed in Boston Public Schools is truly comprehensive. Don’t say, ‘Be safe. Here’s a condom.’ ’’

Students are asking to learn about more than sex and condom usage. Focusing on the controversy of their proposal distracts from the comprehensive nature of their demands, they say.

“I feel like they are focusing on ‘Don’t have sex or don’t get pregnant,’ ’’ Hung Nguyen, a senior at Snowden International School at Copley Square, said after the hearing. “There’s more to it than that.’’

The 18-year-old said his formal education about human reproduction came in the sixth grade, but “it was like: ‘This is a condom. This is what males use to prevent pregnancy.’ We didn’t really talk about sexually transmitted diseases.’’

That is one of the important components of a comprehensive sexual education class, as well as teaching students how to cultivate and maintain healthy relationships, how to spot unhealthy relationships, and discussing sexual identity for gay, lesbian, bisexual, and transgender students, Hung said.

Under Boston’s current policy, condoms are available at nine high schools with community health centers. Although Boston schools are supposed to teach sex education in the ninth grade, the delivery and quality of the programs vary greatly, say teenagers and advocacy groups.

Hung’s message was echoed by the seven teens who spoke during the hearing as well as many of the students packed into the council chambers. Hyde Park Square Task Force stickers were seen on the lapels of many in the room. The youth-development nonprofit in Jamaica Plain kick-started the campaign.

“Sex education is important to me because sexual identity is part of our lives,’’ said Kimpsha Grant, a sophomore at Bridge Over Troubled Waters, an alternative high school downtown. “And when we don’t talk about it, people learn the wrong things about it or nothing at all.’’

She said sex education among the city’s teens is like “a fairy tale’’ shared from one teen to another with little or no factual information. Many of her peers have sex to fit in and don’t fully understand the consequences of their actions, she said.

“What they need to learn about sex is that it’s something you don’t want to rush into,’’ she told the crowd. “It’s a shame that we aren’t learning what we need to.’’

Education is the key to making smart choices, said Samantha Brea, who is also a senior at Snowden International. “When you learn the statistics, you get a better understanding of the dangers,’’ she said.

According to the Boston Public Health Commission, 54 percent of city high school students have had sex — and more than half with more than three partners. And in 2007, 1,383 Boston teens between 15 and 19 were diagnosed with chlamydia — a silent disease that can cause infertility in women — a 70 percent increase since 1999.

Some change is underway.

Barbara Huscher-Cohen, health education program director for the school system, said the district is creating new health education frameworks that will include sex education. The group of students, nurses, and social workers, among others, drafting the curriculum came up with nine recommendations, three of which are already in progress.

The others will be completed within a year, Huscher-Cohen said. They include taking an inventory of the district’s health education efforts, creating a task force to review condom access, establishing comprehensive heath education benchmarks, and training staff to implement them.

Still, some students remained skeptical that the adults in the room would bring about meaningful change. A group of girls with the Youth Action Board shook their heads “no’’ when asked whether they thought their presence would help change minds.

As Roxanne Emokpae, a 15-year-old student at Boston Latin, explained: “I think that presenters stuck to their facts and nothing more.’’