FRAMINGHAM — On Jan. 28, the nation will stop and remember Christa McAuliffe, the New Hampshire teacher who lost her life along with six other astronauts when the space shuttle Challenger exploded 25 years ago.

But her legacy is at work every day of the year in the town where she grew up.

Thousands of science teachers and students come to Framingham State University each year to learn about space exploration at the Challenger Learning Center, part of the Christa Corrigan McAuliffe Center for Education and Teaching Excellence.

“She left an important message about the importance of students and teachers and education,’’ said Grace Corrigan, McAuliffe’s mother, who is now in her mid-80s and still lives in Framingham.

Framingham State, where Christa McAuliffe received her teaching degree, will hold a ceremony on Jan. 27 commemorating the anniversary of the disaster.

NASA plans its own public Day of Remembrance at the Kennedy Space Center in Flor ida the following day.

Last week, 33 middle school teachers were in the Challenger Center’s two simulation rooms, half of them assigned to a space craft orbiting Mars, the other half assigned to the mission control team designed to guide them onto the planet’s surface.

“I’d love to expand our programs more into space,’’ said Eaton, an after-school teacher from Athol. “I want to tell them all about this Mars mission. The kids are really interested in Mars.’’

Some of the teachers were too young to recall exactly where they were at 11:39 a.m. on Jan. 28, 1986, a tragic day that haunted a generation, in part because so many schoolchildren tuned in to see the first teacher go into space.

But Matt Hagopian, an eighth-grade science teacher from Worcester, remembers where he was: an eighth-grader himself, home sick for the day, watching the space shuttle launch on television.

He said his goal in participating in the Challenger Center training was to help “generate excitement about space’’ among his students.

“It used to be the whole country was riveted by these launches; I’d like to see it brought back again,’’ said Hagopian, who was transmitting information about a solar flare to his “crew.’’

The hope is that after teachers become students for a day “there will be a flow back of creativity into their school systems,’’ said Karyl Resnick, coordinator of a state program that helps fund Challenger teacher education programs for low-income districts.

Liscombe was at home in Medway with her young children on the day the nation watched the Challenger break apart just 73 seconds after liftoff, a tragedy later blamed on a leak in one of two solid rocket boosters that ignited the main liquid fuel tank.

McAuliffe left behind a husband, Steven, who later became a federal judge in New Hampshire, and two children, Scott and Caroline, now in their 30s.

Inspired by her friend’s ideals and sacrifice, Liscombe returned soon after to the classroom, teaching science at the Charles River School in Dover. In 1994, she joined the McAuliffe Center.

McAuliffe’s mother and Framingham State president Timothy Flanagan are scheduled to speak at the commemoration next week. Eighth-grade students from the Christa McAuliffe Regional Charter Public School in Framingham will present research projects about space.

The school’s science teacher, Daniel Anderson, said his 76 students have conducted interviews via Skype and e-mail with scientists at NASA, the Massachusetts Institute of Technology, and other universities on topics ranging from artificial gravity and spacesuit technology to lunar geology and meteoroid strikes.

It may become an annual school project, he said. “This is a special year.

The 25th anniversary only happens once, but we can celebrate Christa McAuliffe and what she stood for every year.’’

January is not an easy month for the family, Corrigan acknowledged in an interview last week, and the loss of her 37-year-old daughter in the disaster remains sharp even after 25 years.

What motivates her to constantly revisit the pain is the enthusiasm that the space education programs generate.

“I still hear from teachers all around the country,’’ she said. 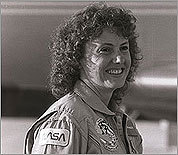