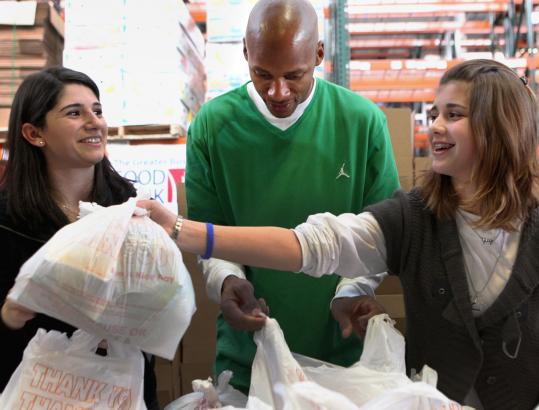 They had ponytails, pimples, and braces.

They asked tons of questions, giggled a lot, and seemed driven to serve.

Across the city, more than 400 eighth-graders came out to help the homeless, stock food for the needy, and generally lend a helping hand.

“It’s really cool,’’ said Sasha Clapp, a 13-year-old from Westhampton as she worked a food assembly line at The Greater Boston Food Bank yesterday. “It’s kind of nice to see how many bags we are actually making and how many people we actually help.’’

The ambitious Project 351 effort was originally scheduled for Jan. 8 as part of Governor Deval Patrick’s inaugural festivities. The event was postponed because of the snowstorm and rescheduled to coincide with Martin Luther King Jr.’s birthday.

Patrick, trumpeting his call to the next generation, said the event aimed to inspire, challenge, and motivate a new group of learners and leaders.

The teens peppered Patrick and Lieutenant Governor Timothy Murray with questions about the joys and trials of their jobs. They also held a moment of silence in honor of the victims of the Jan. 8 shootings in Tucson that left six dead and 13 injured, including US Representative Gabrielle Giffords.

“You all personify the best examples, especially to young people to get involved and find ways to give back,’’ Murray told the youths. “It motivates people. It makes them ask the question, ‘Am I doing my part?’ ’’

After the rally, most of the 13- and 14-year-olds — each from the 351 cities and towns in the Commonwealth — boarded charter buses and fanned out across the city to perform their tasks.

Some stayed in Brighton at Cradles to Crayons, New Giving Factory , where they sorted clothing, toys, and school supplies for homeless children and low-income families.

The students also did work on Dimock Center’s early childhood education center in Roxbury and assembled learning kits for the Countdown to Kindergarten program at the State House.

Along the way, they got help from shooter Ray Allen at the Food Bank. players Brandon McGowan and Kevin Faulk and former New England Revolution member Jay Heaps went to the State House.

“I got a chance to meet some impressive people in Boston and some kids who want to see their community’’ improved, Allen said after his stint at the Food Bank. “It was just a great honor for me to be here.’’

The aim yesterday, the governor and organizers say, was to help 10,000 children across the state who are facing nutrition, health, and economic hardships by providing them with life’s essentials — food, clothing, and compassion.

It is a message that 14-year-old Benjamin White heeded. As a member of the National Junior Honor Society in his hometown of Dudley, White said he helps out at the soup kitchen, picks fruits and vegetables in the community harvest, and tutors students in math at the church where his father is the pastor.

“I enjoy it a lot,’’ said White as he and dozens of other youth volunteers worked on murals inside Blackstone’s cafeteria.

Shawn Magrath and three other youths were working on a two-part mural, one side of which read “Believes in Their Own Success and Is Part of Something.’’

The 13-year-old said the mural captured the spirit of giving, one he recognized after joining Marine Cadets of Massachusetts, a youth program that provides discipline, Marine skills, and life lessons in an effort to get troubled youths off the streets.

“I lived in a position where I didn’t have a lot and I was in need of help,’’ said the Fall River student who wore a President Service Award pin on his shirt for his many hours of community service.

“Now that I’m out of that position, I want kids and adults to know that I know how that feels and that there are people able to help them.’’