No easy fix found for bullying 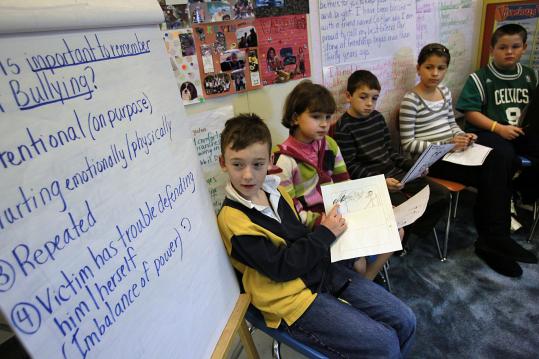 Sixth in a series of occasional articles on bullying and its impact on children, adults, and institutions.

Seven years ago, Washington schools were under state mandate to take action against bullying. Among the most touted and highly regarded antibullying programs was a Norwegian one that had reduced bullying by half in dozens of schools in that country. With great enthusiasm, seven Seattle middle schools adopted it.

Yet a rigorous scientific analysis, after three years, showed the program had no overall effect.

“When we have big problems like bullying we are desperate. We want to do something,’’ said Paula Lozano, a University of Washington professor of pediatrics and a coauthor of the Seattle study. “Doing something feels better than not doing anything.’’

This year, Massachusetts schools face a similar state mandate, including the task of choosing from among a dizzying array of programs that promise to reduce bullying. Principals’ e-mail inboxes have been filled with pitches from consultants, self-help gurus, etiquette trainers, and think tanks. Superintendents have sifted through the websites of programs recommended by the state Department of Education, with names like “Al’s Pals: Kids Making Healthy Choices,’’ “Aggressors, Victims and Bystanders,’’ and “PeaceBuilders.’’

Yet research suggests that despite good intentions and feverish competition to pinpoint a solution, antibullying programs have shown, at best, mixed results, and what has worked in one school has not always worked in another.

“I don’t feel we are in the vaccine stage, where we just know that something is going to work and you just have to line up and take a shot,’’ said Elizabeth Englander, director of the Massachusetts Aggression Reduction Center at Bridgewater State University. “We are nowhere near there.’’

Combating bullying is a relatively new order of business in the United States. Europeans began addressing the problem in the 1970s, but bullying here was largely ignored until a spate of school shootings in the 1990s were linked to bullied students. The January suicide of Phoebe Prince and those of other teens nationwide have added new urgency — sparking initiatives in grades as young as kindergarten. The effort, many say, amounts to a social experiment, one that may never put an absolute end to bullying but may make it less socially acceptable, much as earlier campaigns did for drunken driving and sexual harassment.

Among the most authoritative and wide-ranging evaluations of antibullying programs is a 2009 study by Cambridge University researchers. The pair unearthed hundreds of scientific evaluations of individual programs, a number of which they ignored because the studies had not used acceptable methods. Of the 44 they deemed reliable, just 19 showed significant reductions in bullying.

Among the successful programs, the researchers noticed common elements. The programs focused on cultivating parental involvement, increased playground supervision, and firm disciplinary rules for bullies. Generally, the longer the duration of the program, the greater the improvement. Programs worked best with older youths — those over age 11 — probably because they had more advanced thinking abilities, enabling them to grasp the concept of bullying.

The researchers, too, found that a long-used technique among educators — having bullies and victims sit down together to talk — was ineffective. The strategy, other researchers say, fails because bullies often put on a good face in mediation and deny their behavior while the target, cowed in the presence of the bully, agrees.

The Cambridge University findings underscored a growing consensus that any effort to combat bullying must be collective, involving an entire school community — teachers, parents, children who suffer and witness bullying, bullies, school bus drivers, cafeteria workers — and must be regularly reinforced.

“There needs to be a big effort to really change bullying,’’ said David Farrington, professor of psychological criminology at Cambridge University and coauthor of the study.

For Representative Marty Walz, that view come into clear focus at the State House during an emotional hearing last year. A parade of parents, children, and experts testified about the destructive power of bullying. All of the stories were compelling, moving and upsetting.

But one stuck out.

A mother told of the night her teenage son went to a school dance. Her son suffers from autism and was intimidated by the social setting, but nonetheless ventured onto the dance floor. Unknown to him, a classmate videotaped him and posted the video on the Web. Come Monday morning, the teen was met with a barrage of insults and taunts about the video.

“The level of cruelty was just astounding to me,’’ said Walz, chief author of the state’s antibullying law. “I knew with our law we needed to do more and something different than was being done in other states.’’

It wasn’t enough, she said, just to punish bullies. The law needed to change school culture — to make humiliating a fellow student’s dancing something worthy of punishment, but also unacceptable by the measure of the larger school community. So Massachusetts mandated a wide range of action by schools, including: offering information to parents, providing training to teachers and staff, ensuring that children with disabilities obtain skills to respond to bullying, and teaching students about bullying at every grade level.

The law, of course, is a tough order — mandating a change in a behavior often ingrained in human nature, particularly among youth.

The challenge was evident on a recent morning at the Ivan G. Smith Elementary School in Danvers, which last year, as part of a district-wide initiative, adopted the Norwegian Olweus Bullying Prevention Program.

In a fourth-grade classroom, Jennifer Mitchell posed this hypothetical bullying scenario to her students: What would they do if they were a member of a student group that deliberately excluded just one student?

One boy suggested telling a teacher. Another telling a parent.

Then one girl suggested another route: She would quit the group. Then she would approach the excluded girl and form a new group, from which other students would be excluded. Mitchell was momentarily flummoxed.

“Is there a way you could make it less of a group?’’ Mitchell prodded, trying to help the girl understand that turning the tables merely perpetuated the bad behavior.

“Maybe it could be a homework group?’’ the girl suggested, grasping the point only after more explanation by Mitchell.

Teachers said the exchange highlights the value of lessons such as Mitchell’s — teaching students to think about bullying and its core elements, such as exclusion. It’s that sort of thinking, the teachers said, that has yielded greater awareness and consensus among students about what bullying is and when to report it.

The week before Mitchell convened the meeting in her classroom, a group of Smith students had organized a recess group modeled on a popular television show. The group voted students out of the group, and then barred them from watching the proceedings. Within days, several students had reported the group to an administrator.

“Five years ago, they wouldn’t have come to us so quickly,’’ said Luciana Maffeo, a teacher’s aide.

In a measure of how seriously the school now takes such behavior, administrators banned students from playing the game and insisted that the students write new rules and submit them for approval before it could resume.

The results of the Smith School’s work with the Olweus program — which also has included teacher and staff training, a kick-off pep rally, canary yellow signs posted around the school that list antibullying rules, and outreach to parents — remain to be seen since the program has been in effect for less than a year. Other studies of the Olweus program, the best known bullying programs, offer mixed results.

Developed in the 1980s by the man who pioneered bullying research, Dan Olweus, the program demonstrably decreased bullying in Norway. But in the United States, the picture is less clear. One California suburban town reported a 21 percent decrease in student reports of being bullied after a year in the program. But South Carolina schools in largely rural districts saw “no significant changes’’ in the frequency of such reports. Meanwhile, the Seattle study showed that Olweus improved bullying rates among some white students but did not affect bullying rates among students of other races and ethnicities — yielding an overall neutral result.

Some researchers attribute the divergent outcomes in Norway and the United States to the influence of Olweus in Norway.

“Olweus is very well organized and organizes others very well,’’ said Ken Rigby, a bullying researcher and adjunct professor at the University of South Australia, who noted that both German and Belgian schools have produced disappointing results using the Olweus method.

Other researchers are more critical, noting that Olweus conducted much of the research evaluating his program in Norway — a practice that is common, but not preferred, in social science circles as it can produce biased results.

“It’s like the Wizard of Oz,’’ said Nan Stein, a senior researcher at the Wellesley Centers for Women who has produced her own antibullying program.

“We are all pioneers,’’ said Marlene Snyder, director for development for Olweus in the United States. “I don’t know of any field that got it right from the very beginning.’’

On the ground in Seattle, educators say, the Olweus program was, in a word, work.

“It took a lot just to get [people] to agree on what bullying is. I was getting a lot of argumentation from parents who would say that bullying is just boys being boys,’’ said Marni Campbell, a then-principal of one of the middle schools.

Some students initially also resisted. In particular, they recoiled when they were asked to perform a skit in which they witnessed a bullying incident and had to call out the bully by name — an act that Campbell said is effective in making bullying less anonymous and shows support for the bully victim.

“They thought it was really goofy . . . but it was about changing chemistry and the dynamic in the school,’’ she said.

Nerissa Bauer, chief investigator for the Seattle study, said the study did not produce a clear explanation for why the Olweus program was more effective with white students, but she said in more heavily minority schools, some other issues, such as race relations, tended to crowd out emphasis on bullying.

Ultimately, she said, where Olweus worked, improvement was palpable.

“You could walk into the school and feel a different climate,’’ said Bauer, an assistant professor at Indiana University School of Medicine and a behavioral pediatrician. “There was that larger feeling of school safety, of attention to what’s happening.’’

Replicating that everywhere, she said, is the task that lies ahead.

The world of bullying