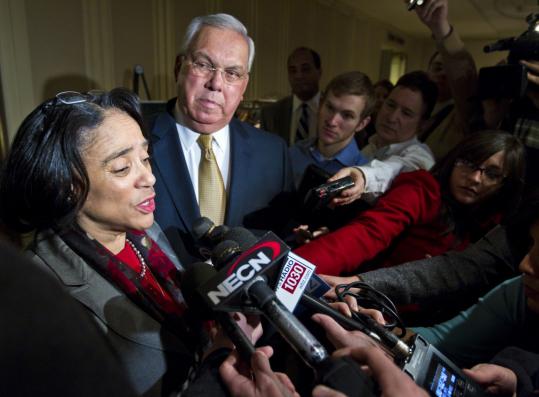 Mayor Thomas M. Menino of Boston, who once famously challenged residents to judge him harshly if public schools did not improve, outlined a substantial overhaul yesterday of how the city educates its children.

Speaking in a Back Bay hotel ballroom packed with more than 500 business leaders, Menino dove back into a vexing issue that been a focal point of his administration since he took office in 1993. The five-term mayor vehemently endorsed a plan to shutter nine schools and called for dramatic changes to the teachers’ contract to lengthen the school day and tie pay to student performance.

“This is the right thing to do at the right time,’’ Menino told the gathering at a Greater Boston Chamber of Commerce breakfast as he linked successful public education with a strong economy. “Let’s not wait to get the reforms we need now. If we miss this opportunity, we have to wait three or four more years.’’

“The speech was designed to put the School Committee on notice that he wants them to close schools,’’ said Richard Stutman, president of the roughly 6,500-member Boston Teachers Union, which describes the plan as ill conceived. “He was unequivocal. He told them what to do.’’

But more than back his superintendent, Menino publicly injected himself into the ongoing negotiations for a new teachers’ contract, ticking off four tangible but difficult changes. He called for increased flexibility for principals and headmasters; demanded that teachers’ pay be linked to student performance; advocated for a longer school day; and pushed to revamp the system used to evaluate teachers.

The two parties have discussed those specifics at the bargaining table, Stutman said, but the mayor’s wish list requires more money when the district is trying to cut costs.

Menino pointedly urged business leaders in the audience to rally behind the effort.

Paul S. Grogan — president of the Boston Foundation, which has campaigned for changes in the teachers’ contract — said that when Menino is focused on an issue like education, “he’s a very formidable force in the city.’’

“He is clearly coming to the aid of his superintendent, who has very unfairly been bombarded politically from all sides on this schools-closing plan,’’ said Grogan. “Lending his vast political capital to her was crucial at this moment.’’

The 22-minute speech stood apart from many of Menino’s other policy addresses, which have included gimmicks that faded after the headlines. He paid homage to his grandiose proposals of the past, lamenting with a laugh that people cannot expect results from all the “things that pop out of my head.’’

“To all the media out there, there are no stories about 1,000-foot towers, no new city halls,’’ Menino said as he began, “so why don’t you just leave.’’

But he quickly segued to education and spoke of his first day in office almost two decades ago, when he visited Edwards Middle School in Charlestown. He reminded the chamber that he delivered a similar address to the same audience in 1996, focusing then on keeping the School Committee under his control.

“There is no joy in closing schools,’’ Menino said yesterday, alluding to his past fight to keep an appointive school board. “We knew they would understand that the right decisions aren’t always the most popular decisions. We knew they would face important moments like tomorrow night when they will vote on Superintendent Johnson’s reform plan.’’

Some in the audience yesterday pointed out that the 67-year-old mayor seemed to use the focus on schools in the past and the present to bookend his time in office, perhaps giving a subtle indication that this may be his last term. Menino and his staff have routinely dismissed any such suggestion.

And by recalling his efforts to improve schools, Menino also highlighted that Boston, like other large American cities, has been unable to fix urban education, despite years of trying.

’’I think Boston has as good a chance as any in producing the academic gains we now know are possible, but it is going to be tough,’’ Grogan said.

On the national stage, Menino has a long track record with “pretty substantial evidence’’ cementing his status as a “very effective education mayor,’’ said Kenneth K. Wong, a Brown University professor who co-wrote a 2007 book on urban education.

By stepping out yesterday in front of his superintendent, Wong said, Menino created a political buffer that should help Johnson implement the changes. But the mayor’s administration still faces considerable obstacles.

Menino made a similar case in a speech last spring to close community centers and branch libraries, with mixed results. The city did pull staff out of eight community centers, but a plan to shut four libraries was delayed until at least this spring. Critics argued that the library decision had been rushed, a charge that has been echoed by opponents of closing schools.

Council President Michael P. Ross said he supported the mayor’s education stance but added that, “as a district city councilor, I can say that some of these reforms, while urgent, are coming very quick for parents.’’

But the superintendent took comfort in Menino’s support.

“Having the mayor’s voice is very important,’’ Johnson said. “None of us want to close schools, but we have no choice. Our hands are tied. We really have to have the resources to invest in learning.’’