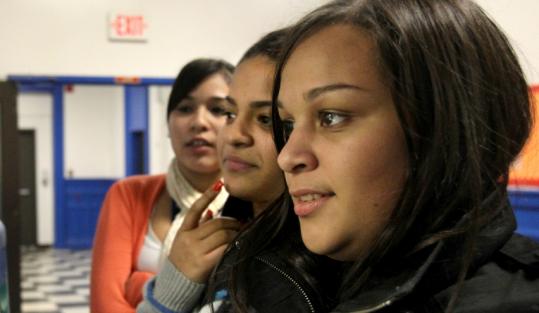 A group of Boston teenagers is pushing for free condoms and comprehensive sex education programs at all city high schools in an effort to prevent unexpected pregnancies and reverse an alarming rise in sexually transmitted infections among city teenagers.

Outdated policies and an overemphasis on boosting standardized test scores are preventing most city high schools from providing students with the information and materials necessary to protect themselves, said the teenagers from the Hyde Square Task Force, a Jamaica Plain nonprofit that works with youths and families.

Among Boston’s approximately three dozen high schools, condoms are available at only the eight schools that have city-run health centers, and students need parental consent to receive them. The delivery of sexual education programs also varies widely, with some high schools offering instruction for several weeks and others for just a few days, if that, the teens said.

The programs, they said, stress ab stinence and often avoid discussion of contraceptives, which the teens find irresponsible.

“Youth will do what they want,’’ said Yadelyn Acevedo, 18, a Brook Farm Business & Service Career Academy senior. “It’s better to give them options and ways to be safe.’’

Under the proposal the students will be presenting to the School Committee in the coming months, each city high school would designate a male and female staff member to give out condoms — instead of just health center employees — and the high schools would provide a rigorous sexual education program to all students.

City statistics highlight the need to combat the rising rates of sexually transmitted infections. In 2007, the year of the most recent comparative statistics, 1,383 Boston youths between the ages of 15 and 19 were diagnosed with chlamydia — a silent disease that can cause infertility in women — a 70 percent increase since 1999.

“It’s sad,’’ said Samantha Brea, 17, a senior at Muriel S. Snowden International High School in the Back Bay. “The schools would rather focus on things like books and tests than things that are affecting us now and could affect our tomorrow.’’

The push comes as the city school and health departments have been ratchetting up attention on the sexual health of teenagers. Tuesday, the departments will hold a forum on the issue.

While city health and school officials applauded the students for taking on this issue, they remained silent on whether they would ultimately endorse the idea of wider and easier access to condoms in city schools.

“We are going to have to listen to the community,’’ said Barbara Huscher, the School Department’s health education program director. “Boston Public Schools is in the business of teaching, and that’s what we focus on first. But we also want to keep students healthy.’’

Barbara Ferrer, executive director of the Boston Public Health Commission, said: “Students need better access to condoms and better access to information. You need to make sure they have both, and you’re representing the values of the community.’’

The school district, which created a new health and wellness department this fall, is taking an inventory of all health programs to see what topics are being taught — an effort that could lead to changes in instruction.

Richard Stutman, the teachers union president, said he expected that teachers would be receptive to the idea of passing out condoms — so long as their involvement was voluntary.

The students’ efforts resemble those undertaken in the early 1990s when the AIDS crisis compelled many school districts across the state to make condoms available to students and to overhaul sex education programs.

When the Boston School Committee adopted the current policy in March 1994, it was considered a monumental shift in the city’s political landscape. A newly elected Mayor Thomas M. Menino, concerned about fast-growing HIV infection rates among teenagers, pushed for the health center policy after earlier efforts stalled for years under staunch opposition from the Archdiocese of Boston, Mayor Raymond Flynn, and various groups.

The policy has the flavors of a compromise: Aside from only allowing the dispensing of condoms at schools with city-run health centers, it also specifies the teaching of abstinence.

Across the state, the availability of condoms in public schools varies greatly. Some public high schools don’t offer them at all; others, such as Lexington High School, leave them in baskets where students can take them, no questions asked.

Provincetown ran into a firestorm earlier this year when it passed a policy that would have allowed condoms to be given to students, even those in elementary school, without parental consent. The School Committee later tweaked the policy, encouraging school staff to consider age appropriateness and circumstances in deciding whether a student should receive a condom.

The teenagers from the Hyde Square Task Force will have an influential ally: Claudio Martinez, the task force’s executive director, is a School Committee member.

The task force teens have been effective in the past in getting proposals or other changes approved by school officials. Two years ago, for instance, it won School Department approval to bring a student-developed civics course to English High School that is now being rolled out at other schools.

To build public support for their current effort, the teens have produced an 18-minute film, highlighting the need for wider distribution of condoms and better sexual education programs.

Packaged as a news program, the film includes a mix of sobering statistics and interviews with students, educators, and city officials.

During one scene, a student reporter descended upon a high school to glean students’ impressions of the quality of sex education programs. Interviews revealed that students most often learned about sex not from school but from friends, watching television or movies, or flipping through pornographic magazines.

Students throughout the film agreed that better sex education programs and wider condom distribution were necessary.

The film will premiere on Dec. 9 at the Connolly Branch Library in Jamaica Plain.

“It’s us — teenagers being affected,’’ said Priscilla Roque, 16, a high school junior. “We have to do everything possible to help us.’’