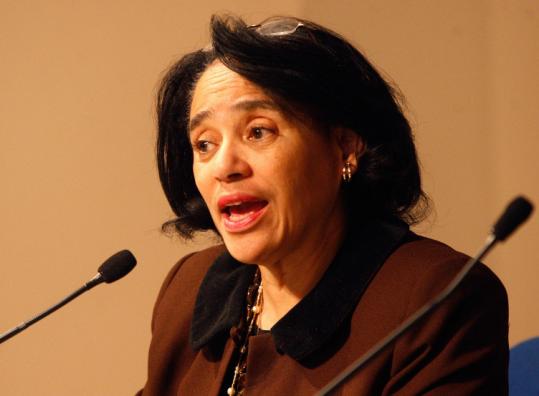 Boston school officials warned last night of devastating cuts at every school across the city if the district does not close schools and reduce transportation spending.

Facility improvements and the purchase of textbooks and supplies, areas that have been cut in recent years, could take another hit.

The scenarios following Superintendent Carol R. Johnson’s recommendations last month to close several schools represent the stark realities confronting the school system as it prepares for its fourth consecutive year of budget cutting. The district is projecting a $63 million shortfall for the school year beginning September 2011. Last night, officials said the 2012-13 school year could be even worse, with an anticipated $91 million shortfall.

“To maintain our commitment to improving academic quality, we must focus on investing in programs that work, on making strategic budget cuts, and finding efficiencies in part through school closures and mergers and also through changes to the teachers’ contract,’’ Johnson said, reading from prepared remarks.

Johnson and her staff presented the dire financial outlook following the public backlash over her school-closing recommendations, which initially gave short shrift in addressing the city’s bleak finances.

Instead, the proposal was packaged as an academic improvement plan, creating much public confusion.

Affected parents, staff, and students saw the proposal as nothing but a cost-cutting measure, and they organized spirited campaigns to save their schools. Fiscal watchdogs said the initial recommendation to close six schools and merge two others was too small to shore up School Department finances.

Johnson, who slightly scaled back the proposal last month then later withdrew the entire plan, is now planning to present a larger set of recommendations at a special School Committee meeting scheduled for Dec. 2. The committee would then vote on Dec. 15.

With more than 150 people turning out for the meeting, roughly two dozen students, parents, staff, and community activists pleaded with the committee during public comments to keep their schools open.

“The Emerson is more than a school; it’s the heart of an underserved neighborhood,’’ said Ros Everdell, director of organizing education and youth at the Dudley Street Neighborhood Initiative, a community-based group whose executive director, John Barros, is a School Committee member.

Steve Marcelin, a Social Justice Academy senior, questioned whether the savings in closing his school was justified.

“I want to know in detail how this plan will deal with the budget crisis and help us reach proficiency,’’ said Marcelin, referring to the district’s goal of having all students demonstrate a solid command of grade-level material.

Marcelin was not the only one looking for more details.

Sam Tyler — president of the Boston Municipal Research Bureau, a government watchdog — said as he left the meeting that he was taking a wait-and-see approach on the prospects of Johnson putting together a comprehensive plan by next month.

“Addressing the financial challenges begs a dramatic, aggressive plan to reallocate resources over the next few years, and that will take more time than they have to develop one,’’ Tyler said.

As in the past three years, sluggish city and state revenue and rising fixed costs are creating another challenging financial picture.

Over the past several years, the School Department has eliminated 771 positions, imposed a wage freeze for managers and principals and a hiring freeze for nonteaching positions, improved energy efficiency, and cut some bus routes. It closed six schools and merged others at the end of the 2008-09 school year.

The cuts could have been worse if the schools had not received additional money from City Hall and federal stimulus funds, funding not expected to be available in the coming years.

The district has already started to chip away at the $63 million shortage for next year, thanks to $10 million the School Department is receiving from a special one-time federal grant to preserve education jobs. Coming up with the rest of the money will be up to the School Department.

“We can’t count on other levels of government to solve our problems,’’ McDonough said. “We must do it ourselves.’’

In January, the school district is expected to raise once again the divisive issue of changing the way the district assigns students to schools after a similar attempt failed two years ago amid public uproar. The effort is intended to reduce busing costs by shrinking the geographic regions from which families can choose schools. If the district comes up with a palatable plan, any savings are not expected to be realized for at least two years.

School Committee members asked a range of questions last night, including whether closing more schools than those already identified would prevent cuts to budgets at the remaining schools.

McDonough said all options remain on the table.