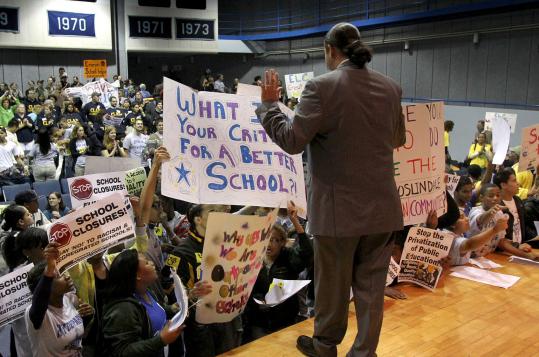 Superintendent Carol R. Johnson presented a revised proposal to the School Committee last night that would spare one of the three Hyde Park high schools that she had recommended for closing this month.

Johnson’s new plan calls for keeping open the Community Academy of Science and Health, while the Social Justice Academy and the Engineering School could close at the end of the school year. Under the revision, Community Academy would be relocated to a different building.

The superintendent is also exploring the possibility of bringing a new program to the Hyde Park education complex.

Johnson unveiled her latest vision to reconfigure the city’s public schools after dozens of students from schools that may close turned out for a rally to keep their campuses open. Some chanted “Save Hyde Park,’’ as passing drivers honked.

Aniyah Biscombe, 15, a sophomore at Social Justice Academy, said: “I feel it’s really unjust. Our school is packed. Our classes have 28 to 30 kids. Where are we going to go?’’

The rally took place outside English High in Jamaica Plain, where the School Committee met.

Other changes to Johnson’s proposal would alter the planned merger of Lee Academy Pilot School and the Joseph Lee School, which share a building in Dorchester. Under the change, Lee Academy would no longer be a K through 5 school and would provide instruction in early education and kindergarten. The Joseph Lee School would serve grades 1 through 5.

Another major change would have the proposed Green Academy, an in-district charter school, take over an existing school.

Johnson is sticking with her original recommendation to close three elementary schools: Ralph Waldo Emerson in Roxbury and the Roger Clap and the East Zone Early Learning Center, both in Dorchester. Another plan includes converting the Gavin Middle School in South Boston into an in-district charter school.

The Rev. Gregory Groover, the School Committee chairman, indicated the board might not vote on the proposal next week if members feel they do not have enough data to make a decision.

After the meeting, Johnson did not rule out additional changes to her proposal based on public comments and requests by School Committee members.

In all of the proposed closings and mergers, Johnson said low student achievement motivated her recommendations.

Parents, students, and staff, however, say Johnson cherry-picked some unflattering data to support her recommendations and failed to provide the public with an analysis that compared the performance of those schools with other Boston schools.

Prompting further ire, Johnson sent letters to parents recently urging them in some cases to enroll their children next year at schools the state has declared underperforming. Johnson later clarified her position, saying she simply suggested those schools, while emphasizing that parents can choose any school in their student assignment areas.

Hundreds of parents, students, staff, and community activists turned out for the meeting. For more than three hours, most attendees spoke out against the proposal and advocated for the preservation of their schools.

A trio of students from the Ralph Waldo Emerson read letters they wrote to Johnson and the School Committee.

“Dr. Johnson, you are making a mistake,’’ said Francisca Barros, 11, a fifth-grader. “If you close the Emerson, you are breaking our family.’’

Many attendees told the committee about what made their schools special. “It’s a magical school,’’ said Ian Gold, the father of a second-grader at the Clap school. “We have the building blocks to make it a success.’’

Richard Stutman, the teachers union president, said the plan was ill-conceived and urged the board to start over. “The schools chosen are not underperforming or dysfunctional,’’ he said.

Lee Academy parents and staff said they did not like the new proposal that would reduce their school to an early education program and asked the board to keep all the grades at the school.

Several students and staff members from Community Academy thanked the superintendent for deciding to keep their school open.