School on the mend 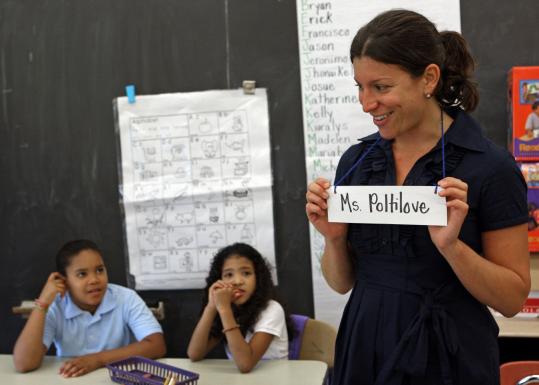 The wiry third-grader thrust his arm into the air, eager to ask a question of Blackstone Elementary School’s new principal on the first day of classes yesterday.

“What is metamorphosis?’’ asked the boy, who proudly called himself a budding scientist.

The question could not have been more appropriate or timely, as the principal, Stephen Zrike, and his staff embark on a three-year effort to dramatically turn around this low-achieving school in Boston’s South End and avert a state takeover.

“Metamorphosis in my mind means change,’’ Zrike answered during an unannounced visit to the class. “I’d say this school has gone through a metamorphosis this summer.’’

The Blackstone and 11 other Boston schools that were declared underperforming by the state this spring are trying to accomplish a feat that has been rarely achieved in public education across the nation: transform a school of persistent failure into a beacon of academic success.

At the Blackstone, changes were evident yesterday in almost every corner, starting with the faces at the head of the classrooms. About 80 percent of the 35 classroom teachers are new, including one hired two weeks before classes began.

Over the summer, the teachers — most of whom came from other city schools and a few from as far away as Memphis and San Francisco — repainted their classrooms, took part in one or more weeks of extra training, visited students in their homes, and even went on a scavenger hunt in the South End to learn more about the community in which many of their students live.

Beyond the staffing changes, Zrike has extended the school day, overhauled curriculum, ramped up communication with parents, and recruited more than a dozen City Year volunteers to crack down on discipline and serve as mentors to the students. A $2.4 million federal grant is helping to pay for the changes.

Indeed, half the students flunked the math sections and 41 percent the English sections on the Massachusetts Comprehensive Assessment System exams in the spring of 2009, the most recent year for which the numbers are available.

The school — sandwiched between two public housing developments and largely bypassed by families in the nearby renovated row houses — has some of the most challenging students to educate. About 90 percent of the school’s roughly 600 students live in poverty and more than half are learning to speak English.

But Zrike said other Boston schools with similar demographics perform at considerably higher rates, instilling in him the belief that Blackstone’s students can do better if the school staff works hard enough and has the right programs and professional support in place.

The state declared the 12 Boston schools and 23 others statewide underperforming under a state law passed by the Legislature in January and quickly signed by Governor Deval Patrick to expedite the turnaround of chronically low-performing schools.

One of the law’s key provisions enables administrators to ask staff at those schools to reapply for their jobs — a move taken at seven of Boston’s schools, including the Blackstone.

Zrike ultimately accepted about 30 of 56 requests from teachers and classroom aides to keep their jobs, while many other staffers decided against reapplying.

Many of the departing teachers, upset about the staffing changes, left in June, leaving behind scores of old textbooks, classroom materials, and other items they had stashed away during the years. (Whether teachers were forced out or left on their own, nearly all found employment at other city-run schools.)

“There are a lot of teachers we asked not to return who were good teachers, but they were not the right match for a turnaround team and adult collaboration,’’ Zrike said.

While urban districts nationwide have sporadically restaffed troubled schools over the past decade — an action that President Obama is now strongly pushing — research into the practice is scant, making it difficult to draw conclusions about its effectiveness.

Mass Insight Education, a Boston-based nonprofit group pushing for changes in public schools, favors having staff reapply for their jobs so long as it is part of a comprehensive turnaround strategy.

“The key is pulling multiple levers at once,’’ said Justin Cohen, president of Mass Insight’s School Turnaround Group, which is planning to study the effects of restaffing at underperforming schools. “Everyone on the staff needs to agree with how change is going to happen.’’

At professional development sessions at the Blackstone last month, both returning and new teachers alike said they were drawn to teaching there because of the prospect of belonging to a staff with a unified vision and a willingness to try new ideas.

The new staff is fairly seasoned. More than half of the classroom teachers have an average of eight years experience, while many have more than 15 years.

Marisa Peralta said she could not resist the opportunity to lead a third-grade classroom after spending years working as a math coach for Boston schools and as a reading tutor at Roxbury’s Hernandez School, where students learn classes in both English and Spanish.

“Am I scared? A little. But I’m more excited than scared,’’ Peralta said last week as she and a parent pulled off green contact paper from a bookcase, preparing it for a coat of fresh paint.

Several teachers who worked with Zrike previously at other Boston schools were intrigued by the idea of working with him again.

“He called me in the spring, and I jumped at the opportunity,’’ said Mark Racine, who taught for three years at the William H. Ohrenberger Elementary School in West Roxbury, including time when Zrike was the principal. “He’s a good boss. I trust him.’’

About a quarter of the Blackstone teachers are serving as instructional leaders to nurture their colleagues, and committing to work a 210-day school year — about 20 days more than most of the other district’s teachers. These instructional leaders were recruited to the school through Teach Plus, a three-year-old Boston nonprofit organization that is training urban teachers to be leaders and sending them in teams into underperforming schools across the nation.

Parents got a preview of the changes at the school last week at a back-to-school celebration — an event that many parents and returning staff don’t ever recall being held at the school before. Several parents said they felt encouraged about the new school year.

Marysol Rivera, whose daughter is in the second grade, said she was particularly pleased that Zrike sent out a letter detailing the school’s dress code, explicitly prohibiting girls from wearing skirts above their knees. She said the dress code and other rules were not tightly enforced last year.

“Kids were running around and teachers were screaming in the morning,’’ said Rivera, an accounts payable clerk who lives in Mission Hill. “I’m looking forward to this year. I think it’s going to be awesome.’’

Discipline took center stage yesterday as teachers enacted a new schoolwide code of conduct in which teachers track each student’s behavior on a color-coded chart in their classrooms.

Students also gathered for an assembly, where staff stressed the importance of respect, unity and excellence, under the theme of “Ubuntu,’’ a rallying cry the , one of the school’s partners, borrowed from southern Africa.

Students who exhibit those principles can earn “spirit tickets’’ that could land them a prize in a raffle.

Domenico Cardillo, a fifth-grade special education teacher who has been at the Blackstone for the past six years, said as he waited for students to arrive that he was eager to see the changes lead to a turnaround.