Confederate symbol near school is a divisive link 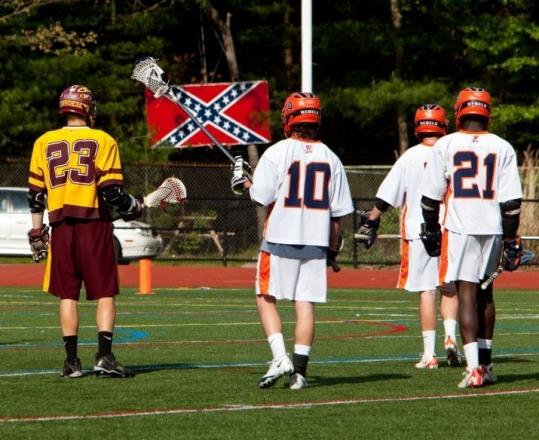 Although no longer an official Walpole High School symbol, a Confederate sign in a nearby private yard still looms large. (Rose Lincoln for The Boston Globe)
By Peter Schworm Globe Staff / May 25, 2010

WALPOLE — Past clapboard houses with white fences, in a tree-filled yard next to the local high school is an unusual sight: a large sign painted to look like a Confederate flag.

In most other parts of the country the flag is a searingly divisive symbol of racial segregation. But here, it is also a display of pride for the Walpole High School Rebels.

For years, Confederate flags filled the bleachers at football games while fans sang “Dixie,’’ the Old South anthem. Yearbooks were emblazoned with the flag, and a celebrated coach went by the nickname General Lee.

Most of that ended in 1994, when school officials declared the flag an inappropriate symbol and eliminated it as an unofficial team emblem. But affection for the flag has lingered, and in the fall it appeared in the neighboring yard, resurrecting what some say is an uncomfortable era in the school’s history. Games at cozy Turco Memorial Field now come with a disclaimer, read to the crowd to preempt tension and distance the school from the controversial display.

“The Walpole School Committee apologizes to anyone who may be offended by the private citizen who chooses to display a Confederate flag in close proximity to the Walpole High School field,’’ the message goes. “It in no way reflects values that we support.’’

School officials rue the flag’s presence, but say the neighbor who hung the flag from a tree in his backyard, a Walpole High School student in the 1960s, has the right to display it on his property. The owner of the house where the sign is displayed could not be reached for comment.

“We wish this proud Rebel would take it down,’’ said John Desmond, chairman of the school board. “It’s unfortunate it was ever used.’’

Many in town say fondness for the flag, which for years was emblazoned on the team’s uniforms, runs far deeper than one defiant graduate. From the 1960s, when a coach named John Lee came from Tennessee to lift the team to prominence, until the school dropped the symbol in 1994, Confederate flags were flown openly at games, and team photos were taken in front of a large mural of a flag near the field.

Even today, when the blue-crossed Confederate flag is widely seen as a painful reminder of the nation’s history of racial injustice, the occasional fan will wave the banner from the stands, as they did at a 2008 championship game at Gillette Stadium.

“The cover of my yearbook was a Confederate flag,’’ recalled Mike Amaral, a 1971 graduate who laments the school’s strong affiliation with the flag and has urged the school to choose a new mascot. “Some people can’t seem to let that go.’’

For supporters, the Rebel nickname and the flag symbolize school spirit, and serve as an important link to the school’s past. Walpole could hardly be less Southern, but some interpret the flag as some white Southerners do, as an expression of pride, valor, and determination.

That has been especially true for the football team, which has won an impressive 20 league championships and seven Super Bowls, and had numerous undefeated seasons in the past four decades.

“It’s pride, not prejudice,’’ said Dylan Murphy, a junior, and one of a number of students who support the Rebel nickname and flag. “That’s what it means to us.’’

Murphy said some students waved a Confederate flag at a football game last fall, but a coach quickly spotted it and stormed into the stands to take it away.

One black student at Walpole High, quoted in a video report by the school newspaper, The Rebellion, said she is not bothered by the flag’s use at games because “I know people in the school are not using it against me.’’ But another said, “As a man of color, I find it offensive.’’

Others agree the flag is offensive, at least to some. But they regard the Rebel nickname as sacrosanct and view efforts to discard it as mere political correctness. That is especially true among students.

“It’s Rebel pride,’’ said Will Krumpholz, 15, who added that “players like it more than their parents.’’

Walpole High adopted the Rebels’ moniker — replacing its old mascot, the Hilltoppers — in the mid-1960s, at the centennial of the Civil War and amid the bitter strife of the civil rights movement. At first the nickname carried no connection to the Confederacy. But when John Lee took over as coach in 1968, the Rebels fandom took on a distinctly Old South tone. Newspapers called the team “General Lee’s Rebels,’’ and Confederate flags became popular. In yearbook pictures from the era, flags fill the stands. Such images continued well into the 1980s.

“To speak against it was to speak against the team,’’ said Charles Hardy, a longtime social studies teacher at the high school who retired in 2002. “It always seemed pretty insensitive, but people just persisted with it.’’

In the latter part of that decade, a group from the New England Association of Schools and Colleges expressed concern about the use of Confederate flags, saying the banners “may be inappropriate due to its historical ramifications.’’ That led to the end of its official use as a symbol.

But debate over the nickname persists. When asked about the flag, school officials barely deviate from prewritten statements.

Amaral, a member of the town’s historical commission, said the nickname trivializes Civil War history, romanticizes the Confederacy, and dishonors the sacrifice of Union soldiers, particularly those from Walpole who died for their country.

“This isn’t our history, it’s somebody else’s,’’ he said. “And these are heroes that deserve better.’’