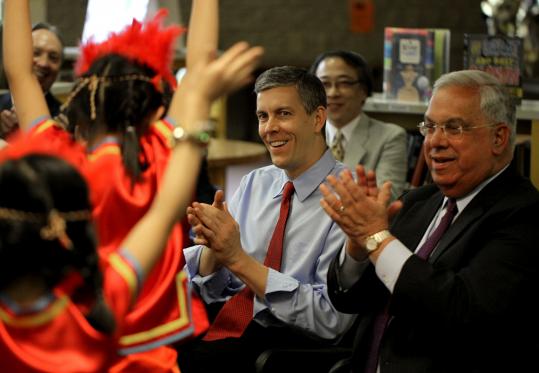 US Education Secretary Arne Duncan made several stops in Boston yesterday, including a visit to the Josiah Quincy Elementary School, where he joined Mayor Thomas Menino. They watched second-graders perform a Taiwanese Aboriginal dance. (Jonathan Wiggs/Globe Staff)
By David Abel Globe Staff / May 20, 2010

US Education Secretary Arne Duncan warned yesterday that as many as 300,000 teachers nationwide, including 4,000 teachers in Massachusetts, could lose their jobs this year if Congress does not provide additional money to aid struggling states and municipalities.

Duncan, the keynote speaker at Lesley University’s commencement ceremony at the Boston Convention and Exhibition Center, said he and President Obama are deeply concerned about teacher cutbacks and cited the recent pink slips delivered to 480 teachers in Brockton, more than one-third of the district’s teaching staff, as an example of what could happen elsewhere in the country.

He urged Congress to pass a pending $23 billion education and jobs bill that he said would save or create more than 256,000 teaching positions, including an estimated 4,300 in the Bay State.

His remarks came after Lesley awarded honorary degrees to Victoria Reggie Kennedy and her late husband, Edward M. Kennedy; Chinua Achebe, the Nigerian author of the classic 1958 novel “Things Fall Apart;’’ and Roz Chast, an illustrator and cartoonist for The New Yorker since 1978.

Officials at the Massachusetts Teachers Association, a union that represents more than 100,000 of the state’s teachers and other educators, said they expect thousands of teacher layoffs if Congress does not act.

“We are extremely concerned about layoffs in the coming year, which would be hugely disruptive for both our students and our members,’’ said Anne Wass, the association’s president.

She said all of Massachusetts’s congressional representatives have already voted for the House version of the jobs and education bill. Senator John F. Kerry is a cosponsor of the bill in the Senate, but Senator Scott Brown has yet to sign on.

“All eyes are on Scott Brown, because his vote is needed to keep teachers in the classroom,’’ Wass said.

In a statement, Felix Browne, a spokesman for Scott Brown, said the senator would not support the bill until the Senate finds a different way to pay for it.

“Senator Brown feels we should be fiscally responsible and employ an alternate way to pay for this proposal, such as using some of the $60 billion in unobligated stimulus funds,’’ Browne said.

Duncan’s speech at Lesley’s commencement was one of several stops he made in the Boston area yesterday.

After the ceremony, he toured Beachmont Elementary School in Revere, where he visited classes and discussed the issue of layoffs with Massachusetts Education Secretary Paul Reville, union leaders, Revere Superintendent Paul Dakin, and local teachers.

During his commencement speech, Duncan called teachers the nation’s “unsung heroes’’ and described their low wages as a “national embarrassment.’’

While he noted that the near-term employment prospects for many of the university’s 2,700 graduates — two-thirds of whom studied education — may look dismal, he said he expects the nation will hire more than a million new teachers over the next four years, as increasing numbers of baby boomers retire from the profession.

He also urged the students “to remember that poverty is not destiny.’’

“Education, above all, must be the great equalizer in America,’’ he said. “If you care about promoting opportunity and reducing inequality, the classroom is a great place to start. Great teaching is about so much more than education; it is literally the daily price for social justice.’’