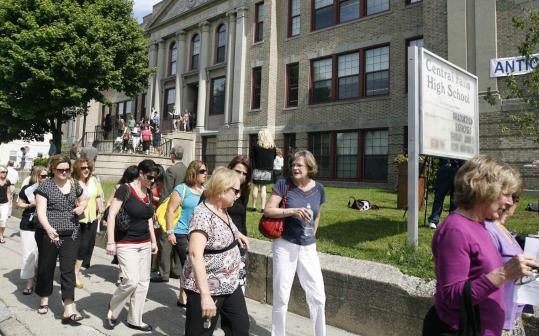 CENTRAL FALLS, R.I. — The president of the teachers union said collective bargaining had worked. The school superintendent lauded a new era of collaboration for a failing high school singled out by President Obama. But the bottom line of a labor agreement approved yesterday showed another, hard-edged result.

In a dramatic conclusion to four months of acrimony, teachers in this struggling city conceded nearly everything administrators had demanded in return for the jobs of 93 faculty, management, and staff at beleaguered Central Falls High School.

Faced with the prospect that all their high school colleagues would be out of work next month, the union’s 336 members overwhelmingly ratified a tentative agreement reached Saturday night at the West Warwick home of Superintendent Frances Gallo.

“It’s a new deal, it’s a new opportunity, and we’re in it together,’’ Gallo said at a press conference outside the high school yesterday.

Among teachers, however, the reaction was mostly silent and subdued as they walked slowly from the high school after the vote.

“I just hope that it never happens again, here or at any other school,’’ said George McLaughlin, a guidance counselor. “This was very, very tough on the people who work here, and the kids here suffered tremendously.’’

Under the agreement, which is expected to receive final approval next Tuesday by the Board of Trustees, teachers will be required to work an additional 30 minutes a day, devote 90 minutes after school every week to planning, and submit to rigorous evaluation to retain their jobs after the 2010-11 school year.

The teachers will also eat lunch with students one day per week, attend five to 10 days of professional development every summer, and accept a staffing policy that eliminates strict seniority. The high school principal will be replaced.

Teachers at the 850-student school will be paid for the extra work, Gallo said.

“We will not have persistently low-achieving schools in our state; we will not have it,’’ said state Education Commissioner Deborah Gist. “We are incredibly serious about this reform effort.’’

In February, Central Falls High became a lightning rod in the contentious national debate over education reform when all the school’s teachers and staff were told they would be fired at the end of the school year. That decision, one of four options under a federal protocol for the poorest-performing schools, came after Gallo and the union failed to reach an agreement on workplace changes.

In March, Obama cited the mass firings as an example of the tough measures needed to turn around struggling schools like Central Falls, which serves a low-income, heavily immigrant community.

“If a school continues to fail its students year after year after year, if it doesn’t show any sign of improvement, then there’s got to be a sense of accountability,’’ the president said. “And that’s what happened in Rhode Island.’’

Obama cited a statistic that only 7 percent of 11th-graders in Central Falls passed a math proficiency test.

Gallo said yesterday that the firings had not been a negotiating ploy. “It wasn’t a lame threat,’’ the superintendent said. “It wasn’t a threat at all. It was following the protocol.’’

Jane Sessums, the union president, described herself as “very, very pleased’’ with the agreement.

“We have been able to get the teachers’ voice activated,’’ she said.

McLaughlin said teachers are grateful that an accord was reached. When asked to elaborate, McLaughlin replied, “We’re glad we’re going to be able to eat.’’

Gallo said she believes the Central Falls experience can serve as a national model.

“I think this document we have and what we’ve achieved here could certainly serve as a template for going forward,’’ the superintendent said.

Many students at the school seemed buoyed by the agreement, which means that teachers will not be required to reapply for their jobs in the fall. The prospect of a completely new staff at Central Falls High had attracted more than 700 applicants from a tough national market for teachers.

“It’s good because they’re good teachers,’’ said Miguel Vazquez, 16, a junior. “It’s the students who slack off. We need a little more motivation.’’

Belmira Dalomba, 18, who graduated from the high school last year, said the teachers are handicapped by uninterested students and are not the reason for the school’s chronically low test scores.

“If the students don’t care, why should the teachers care,’’ asked Dalomba, who credited her high school teachers for the motivation to attend Paine College in Georgia. “If the teachers see you’re not willing to work, they’re not going to force you.’’

But Jason Medina, a 17-year-old junior, greeted the labor agreement with a shrug.

“Personally, I really don’t care,’’ Medina said. “As long as I get my education, it’s fine with me.’’