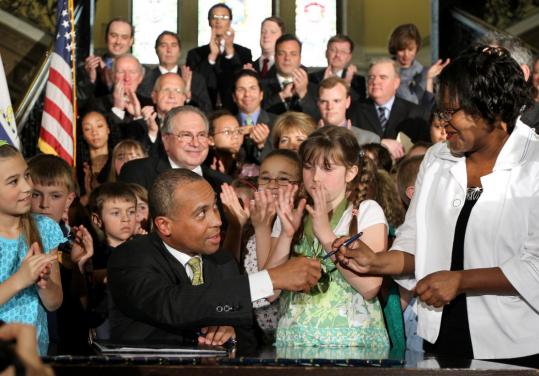 When Governor Deval Patrick signed Massachusetts’ first antibullying law yesterday, supporters heralded it as the most far-reaching effort yet by a state to deter behavior that has driven youngsters to suicide.

But a number of civil rights lawyers and plaintiffs’ attorneys across the country and in Massachusetts say the new law may go too far, limiting students’ constitutionally protected free speech. They said it will almost certainly lead to legal challenges.

Fueled in large part by soaring recent complaints about “cyber-bullying,’’ some 44 states, including Massachusetts, now have laws that prohibit bullying of students in school and online. But federal lawsuits have also increased because parents of students who have been disciplined are fighting back.

“The people who pass these laws want to make everything better, I understand that,’’ said Evan S. Cohen, a Los Angeles lawyer. He won a federal lawsuit in November on behalf of his daughter after she was suspended by her Beverly Hills middle school for posting a video on YouTube that she shot of her friends making vulgar remarks about a classmate at a restaurant. “They want to protect children, I understand that, too. But that doesn’t mean it’s constitutional.’’

In the case involving Cohen’s daughter, US District Court Judge Stephen V. Wilson ruled that schools cannot suspend a student “simply because another student takes offense to their speech, without any evidence that such speech caused a substantial disruption of the school’s activities.’’

“The court cannot uphold school discipline of student speech simply because young persons are unpredictable or immature, or because, in general, teenagers are emotionally fragile and may often fight over hurtful comments,’’ he wrote in his 57-page opinion.

In February, a federal appeals court in Pennsylvania ruled that a Mercer County district had no right to suspend a high school student for 10 days for creating a lewd phony MySpace profile of his principal. The court said the profile, in which the student referred to the principal as a “big steroid freak’’ and a “big whore,’’ was protected free speech.

But in an illustration of how murky this area of evolving law is, a federal appeals court panel in Pennsylvania ruled the same day that a school in another county had the authority to suspend an eighth-grader who posted sexually explicit material along with her principal’s photograph on a fake MySpace page.

The US Supreme Court has yet to take up a case involving student speech online, so many school districts are struggling to find the right balance between combating cyber-bullying and avoiding free speech violations, according to legal specialists.

State Representative Martha Walz, the primary sponsor of the antibullying bill passed last week by unanimous votes in the Massachusetts House and Senate, said she took pains to draft a bill that would address an epidemic of bullying — online and otherwise — and preserve the First Amendment rights of students. She pored over the laws of other states and read numerous federal cases.

“That was a very significant concern of mine — that we do not trample on the civil liberties of students,’’ said Walz, a Boston Democrat and House chairwoman of the Joint Committee on Education.

Walz said the Massachusetts bill, which gained momentum after the January suicide of 15-year-old Phoebe Prince in South Hadley made international headlines, builds on what other states do right but is also unique. For one thing, she said, she was unaware of any other state that requires, as Massachusetts now does, that every student from kindergarten through 12th grade participate in an antibullying curriculum every year.

“The way we’re going to address the bullying problem is to fundamentally change the school culture,’’ she said. “One of the ways to do that is to educate the students from a very early age about how to interact with one another, how to deal with conflict, and how to help classmates when they are being treated inappropriately.’’

Only Massachusetts, she said, requires that private schools, not just public schools, have bullying prevention and intervention programs. Moreover, antibullying laws in other states specifically ban bullying that targets individuals based on race, ethnicity, gender, religion, or other traits. The Massachusetts law deliberately eschewed that, Walz said, because bullies elsewhere have avoided discipline by claiming they never intended to target a member of a certain group.

But some aspects of the law are so general that civil rights lawyers are concerned about how schools will apply it. The law, for example, defines one form of bullying as “repeated use’’ of a written, verbal, or physical act that “causes physical or emotional harm to the victim.’’

By that standard, said Gavi Wolfe, legislative counsel for the American Civil Liberties Union of Massachusetts, a student who calls another student “loser’’ twice on the school bus and hurts the youngster’s feelings could qualify as a bully. A bus driver who heard the remarks would have to report them to school officials, who would then have to contact the parents of both children and take appropriate disciplinary action.

Harvey A. Silverglate, a well-known Boston civil rights lawyer, said, “School authorities are going to overreact, and we’re going to have a firestorm of administrative actions against kids for saying things that are merely slightly unpleasant but do not qualify as bullying or harassment or stalking or any other such thing.’’

Wolfe also objected to a provision that requires school principals to notify the police if the administrator “believes that criminal charges may be pursued against a perpetrator.’’ Although the law does not make bullying itself a new crime, Wolfe said he feared that the open-ended language will encourage more principals to go to the police.

“We already have a well-documented problem with a kind of funnel of schools into prisons,’’ Wolfe said. “Mandatory reporting of children to the police is going to increase the flow of the school-to-prison pipeline.’’

Walz said she took such concerns seriously and added that the state Department of Elementary and Secondary Education will draft a policy for when schools should contact the police. But she expected the majority of bullying cases to stay school matters. She noted that law enforcement authorities were already able to charge egregious cases of bullying under existing criminal laws. Northwestern District Attorney Elizabeth Scheibel charged six teenagers in March with a variety of crimes in the alleged bullying of Prince, including criminal harassment and civil rights violations.

Champions of the new law, including the Anti-Defamation League of New England and the Massachusetts Gay and Lesbian Political Caucus, also expressed confidence that with training, school officials will do their best to staunch bullying and protect civil liberties.