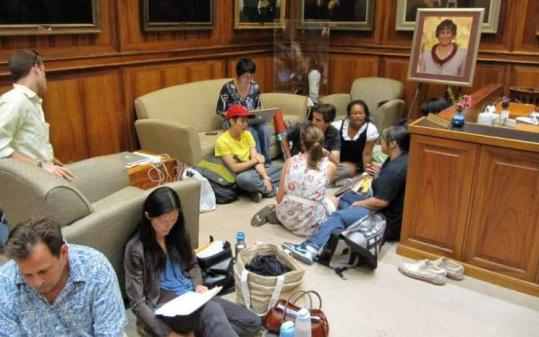 Opponents of Hawaii’s school furloughs have camped in the lobby of the governor’s office for five of the past seven days. (Herbert A. Sample/ Associated Press)
Associated Press / April 15, 2010

HONOLULU — Parents angry about Hawaii’s shortest-in-the-nation school year aren’t giving up on a sit-in at Governor Linda Lingle’s office despite two arrests and more than a dozen trespassing tickets.

The protesters, camped in the lobby of Lingle’s office for five of the past seven days, are upset by budget-cutting education furloughs approved last year. As a result, Hawaii students go to school four days a week in most weeks, and the state owns the unwelcome distinction of having the shortest instructional calendar in the nation: just 163 days.

Thirteen days have been lost in the current school year, with four more furlough days slated in the coming weeks.

So far, 14 people have been issued citations for trespassing, and Lingle yesterday warned the protesters they risked arrest if they remained in the office lobby overnight.

Later, two University of Hawaii students who remained after closing hours were arrested, and eight others were handed trespassing citations, according to protester Marguerite Higa.

The furloughs were the result of a labor pact signed last year by state education officials and the Hawaii State Teachers Association after Lingle cut allocations for public education to help close a severe budget shortfall. Lingle signed off on the labor contract.

Lingle said she has not been interested in meeting with the protesters.

“I’m kind of human . . . and when people send me what I take as being politically threatening letters and saying, ‘If you don’t meet with us, then we’re going to do X, Y, and Z,’ it’s just not the kind of people you’re excited to meet with,’’ the governor said.