Police hold off crowd pushing into meeting after a rally 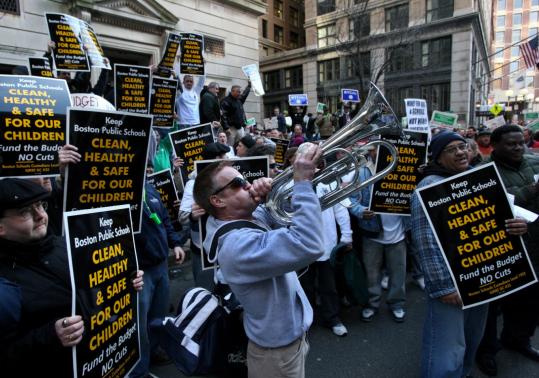 A crowd from a rally that drew hundreds of school employees tried rushing into Boston School Department headquarters last night, sparking a standoff with police, just hours before the School Committee slashed millions of dollars in spending for the next school year but without closing any schools.

More than a dozen police officers struggled for several minutes to pull the doors free of the crowd, in an effort to prevent anyone from entering the downtown Court Street building, where the School Committee chamber was nearing its capacity of 167 people.

One man, as he tried to push his way through the doors, yelled, “We have a right.’’

A few moments later, an officer yelled to colleagues down the hallway, “We need help.’’ Eventually the officers slammed the doors shut and stood guard.

The confrontation came as the district faces its third consecutive year of severe budget cutting, while the state and the city struggle to rebound from the nation’s troubled economy.

“We know these cuts are painful,’’ said the Rev. Gregory Groover, the board’s chairman.

Emotions are running even higher than in previous years because new efforts by the state and federal governments to overhaul public education have led the state to declare 12 Boston schools underperforming this month, causing Superintendent Carol R. Johnson to force teachers at half of those schools to reapply for their jobs.

The rally was organized by the teachers union and included community activists, parents, students, and members of other city unions such as bus drivers and custodians.

“Our schools aren’t underperforming, they are underresourced,’’ Richard Stutman, the teachers union president, yelled to the crowd earlier.

Johnson said she tried to avoid cuts that would directly affect classroom learning.

While the budget does not call for teacher layoffs, it will bar principals from replacing some teachers who retire or leave the district for other reasons.

One area taking a big hit is building maintenance. More than $5 million worth of repair projects, such as repainting dingy walls, will be put on hold. The budget also eliminates more than 80 custodial positions, about 20 percent of that workforce, nearly all through layoffs.

In a statement yesterday, Michael Lafferty of the custodian union linked maintenance in the schools to student health and safety. Several School Committee members expressed discomfort with losing so many custodians.

The financial outlook has improved slightly since Johnson unveiled her budget proposal early last month. She initially recommended, at the request of Mayor Thomas M. Menino, spending 1 percent less than this year’s total. Earlier this month, the mayor decided the city could afford to spend the same next year as it is spending this year.

That, however, still meant the district had to cut roughly $50 million because of increases in health care premiums and contractually negotiated pay raises.

After making a series of cuts, the district still confronted a $3.5 million spending gap this week, prompting the mayor to allow the district to increase next year’s budget by that amount.

The decision enabled Johnson to avoid the prospect of controversial school closings this fall. But she warned last night that a significant number of schools will have to close in the coming years. Enrollment has plummeted by thousands of students over the last decade, leaving roughly 4,500 empty seats scattered across the district’s 135 schools.

“We have to address excess capacity if we are going to have any resources left,’’ Johnson said.

The budget now heads to the mayor, who will include it in his budget proposal to the City Council next month.

During public testimony before the vote, Manuel Rios Alers, a 17-year-old junior from the John D. O’Bryant School of Math and Science in Roxbury, spoke against cutting more than $500,000 from his school’s operating funds and also reducing custodial staff from the district. He said his school, where students must pass an academic exam for admittance, suffered leaks during last week’s torrential rain, causing mold. “If you keep cutting our schools, we will be in the gutter,’’ he said.

A classmate, Eftina Gjikuria, 17, held up an English book with most of its pages coming unglued from its binding and said, “I’m sad to say I’m in AP English, and this is what I get.’’

At the rally, police closed off traffic to a section of Court Street as the crowd grew and protesters banged drums, blared sirens, and honked horns. Some waved signs that said, “Budget cuts hurt kids’’ and “Underfunding equals underperforming.’’

Groover apologized to the attendees that many others could not join them inside, but emphasized that the School Committee had to abide by the law for seating capacity. Another member suggested the group take that energy to Beacon Hill to lobby for more money for the district.