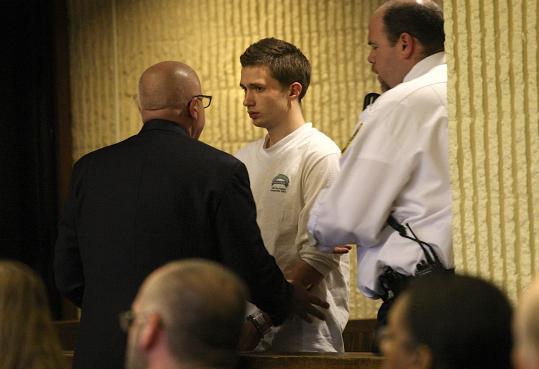 A not guilty plea was entered on behalf of Christopher Maxson, who was arraigned on several charges yesterday in Lynn. (Photos By Suzanne Kreiter/Globe Staff)
By Milton J. Valencia Globe Staff / March 23, 2010

LYNN — The North Shore teenager accused of driving drunk and causing the car crash that killed his girlfriend early Sunday morning in Lynn told police that he had rum and soda and other drinks before he ran two stop signs, a prosecutor said in court yesterday.

But the grieving mother of 19-year-old Julie Gauthier, a dancer, athlete, and student enjoying her freshman year at Salem State College, met with the teen’s family yesterday in a sharing of heartbreak.

The mother, Marie Gauthier, did not attend the court hearing and apparently went to the courthouse solely for the exchange, in a private room in the courthouse. She did not want to comment, other than to call her daughter “a wonderful girl.’’

A lawyer for Christopher J. Maxson, 19, called the meeting a remarkable moment between families that are suffering in their own way. The lawyer, John Andrews of Salem, would not discuss the conversation but said both families understand each other’s grief.

“Both families are respectful of the deep loss that has been suffered here,’’ he said.

“I am very sorry this tragedy had to happen,’’ he said. “She was a wonderful, wonderful girl.’’

Christopher Maxson of Marblehead was arraigned on charges including motor vehicle homicide while operating under the influence. A not guilty plea was entered on his behalf, and bail was set at $12,500. Prosecutors had requested that bail be set at $25,000.

Looking frail, he said nothing in court. His father, mother, and other relatives sat in the courtroom.

Lawyers for Maxson said the teenager, who had dropped out of Salem State last year and was working most recently as a landscaper, was in shock.

“He’s obviously very distressed, and he’s dealing with this as best as he can,’’ attorney Marc Salinas said. “It’s clearly a tragedy in the highest order, and his thoughts and prayers are with her family.’’

Maxson told police he was at a house party and thought he was taking a shortcut home at about 1 a.m. Driving his mother’s 4Runner, he drove through two stop signs on Glenwood Street before colliding with a Civic at the intersection with Eastern Avenue. The impact sent the sport utility vehicle out of control; it careered into three parked cars before rolling over and slamming against a fourth.

Gauthier, the front-seat passenger, was ejected from the sunroof and was pronounced dead at the scene.

Two friends sitting in the back seat escaped with minor injuries, and they and Maxson were transferred to a local hospital. They were later released.

It is not known if the occupants were wearing seatbelts.

Maxson told police he did not see the stop signs. But officers said he had bloodshot and glassy eyes and had the smell of alcohol on his breath.

Maxon was not given a sobriety test at the scene because he was being tended to by medics, according to court records.

Prosecutors said in court yesterday that the incident was not Maxson’s first encounter with police. He had been arrested on charges of possessing marijuana with intent to distribute in 2008 and was serving a probation sentence that was set to expire in April.

He also had a reckless driving history and was ordered two years ago to attend driver training courses for attitude adjustment and road rage after he was cited for speeding in Brookline.

Maxson’s lawyers said yesterday that they are beginning to review the case and could not comment on the specific allegations from Sunday’s accident.

The crash startled a quiet neighborhood near Route 107 in Lynn. Bob Soper, who lives across the street from the accident scene, said he could hear the screech of the SUV sliding on the ground before colliding with another car.

Outside, he could see the three men in a panic while emergency responders tended to Gauthier.

Yesterday, a collection of candles, notes, and other memorabilia marked the crash site.

A 2009 graduate of Salem High School, Gauthier played lacrosse and field hockey and graduated 10th in her class. She was remembered for her dancing and her wit.

“There’s certainly a lot of people who were close to her and are affected by this,’’ said David Angeramo, principal of Salem High School, who added that grief counselors were available for students.

“She was a good student and certainly a great athlete. Julie was widely known and will be greatly missed.’’