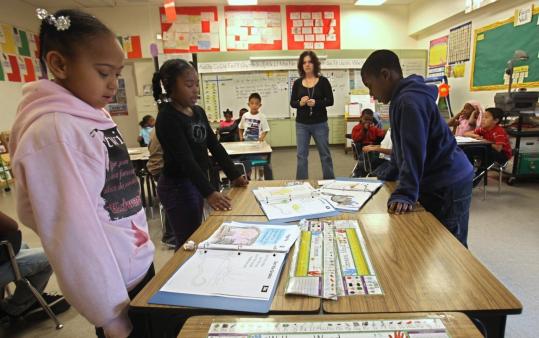 School districts have already suffered big budget cuts since the recession began two years ago, but specialists say the cash crunch will get a lot worse as states run out of stimulus dollars.

The situation is particularly ugly in California, where school districts are preparing for mass layoffs and swelling class sizes as the state grapples with another massive budget shortfall.

The crisis concerns parents like Michelle Parker in San Francisco, where the school district faces a $113 million budget deficit over next two years.

“I’m worried they’re not going to have the quality education that’s going to make them competitive in a global society,’’ said Parker, who has three children in district elementary schools.

Around the country, state governments are cutting money for schools as they grapple with huge budget gaps triggered by high unemployment, sluggish retail sales, and falling real estate prices.

A recent report by the Center on Budget and Policy Priorities found that 41 states face midyear budget shortfalls totaling $35 billion.

“The states are facing a dismal financial picture,’’ said Jack Jennings, president of the Center on Education Policy.

But many states have used most of their stimulus money, leaving little to cushion budget cuts in the coming fiscal year.

Advocates say the looming cuts could weaken the nation’s public schools, worsen unemployment, undermine the president’s education goals, and widen the achievement gap between students in rich and poor districts.

Wealthier communities are filling school budget gaps with local tax increases and aggressive fund-raising, but could worsen inequality and undermine the larger system for paying for public schools, said John Rogers, who heads the UCLA Institute for Democracy, Education and Access.

In Michigan, which has the nation’s highest unemployment rate, school districts lost 2 percent of their state money this year and could lose 4 percent more next year because of a projected government shortfall of $1.6 billion. Most of more than $1 billion in federal stimulus money is gone.

Democratic Governor Jennifer Granholm has proposed an incentive program to entice about 39,000 public school employees to retire, but that plan has been criticized by the state’s largest teachers union.

“Our districts don’t know what the next step is,’’ said Don Wotruba, deputy director with the Michigan Association of School Boards.

In Washington state, school districts that lost $1.7 billion in state money over the past two years are bracing for another round of cuts as lawmakers try to plug a $2.8 billion state deficit.

In Florida, public schools are being squeezed by state budget cuts and an unexpected increase in student enrollment, including an influx of Haitian students in the aftermath of the devastating earthquake.

Districts have been coping by closing schools during breaks, cutting energy costs and changing transportation routes, but the next round of cuts is expected to hit classrooms.

“We’re at a point now where you just can’t stretch that rubber band any further,’’ said Bill Montford, chief executive of the Florida Association of District School Superintendents.

But state officials are warning the worst is yet to come because the state has already handed out most of its $6 billion in stimulus money.

Per-pupil spending for K-12 schools fell 4 percent last year and would be slashed another 8 percent under Governor Arnold Schwarzenegger’s proposed budget for 2010-2011, according to the state Legislative Analyst’s Office.

“It’s cataclysmic. It hasn’t been seen since the Great Depression,’’ said Bruce Fuller, an education professor at the University of California, Berkeley. “Now you’re talking about sizable layoffs and further increases in class sizes.’’

More districts are expected to look like Vallejo City Unified School District, which has laid off most of its middle school guidance counselors and no longer offers music or art in elementary school. Last year it laid off 60 of its 860 teachers and raised K-3 class sizes from 20 to 28 students, and officials are considering more layoffs and even bigger class sizes this year, said Christal Watts, who heads the teachers union.