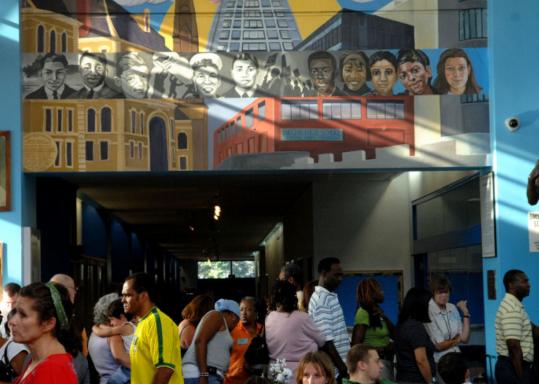 Teachers and staff members gathered in the lobby for breakfast with the headmaster at English High School in September 2007. English became a pilot school two years ago.
(Wiqan Ang for The Boston Globe/File 2007
)
By James Vaznis Globe Staff / November 19, 2009

School Superintendent Carol R. Johnson last night revealed the names of 14 Boston schools slated for massive overhauls, reinvention, or possible closing under a plan that would affect more than 6,000 students.

Johnson chose to focus on the schools because of chronically low MCAS scores. She delivered the news to the School Committee in the auditorium of one of the affected schools: Orchard Gardens K-8 School in Roxbury, which opened with great fanfare in a new facility at the corner of Melnea Cass Boulevard and Albany Street in 2003, and has roughly 600 students.

“For our very survival, we must launch a new era for Boston public schools,’’ Johnson told a packed auditorium. “We are prepared to innovate.’’

Orchard Gardens is part of the district’s much-hyped pilot schools program, which allows administrators to deviate from districtwide curriculum mandates and teacher union rules in hope of sparking teaching innovation. But Orchard Gardens has long suffered from low test scores and turnover of principals. It is one of three pilot schools slated for a dramatic overhaul.

The other two pilot schools are Harbor Middle School in Dorchester, which specializes in integrating students with severe special needs in regular classrooms and has been planning to add a high school program and English High School in Jamaica Plain. English became a pilot school two years ago as part of a joint effort by the city and the state to bring the school back to its former glory.

The options under consideration in Johnson’s plan include major shake-ups in a school’s administrative team and teaching staff, extending the school day, or closing a failing school and reopening a new school in its building, a measure the district imposed on at least two schools this year. That is a way the district can expand successful programs and make wholesale changes to teaching staff.

More than half of the schools slated for major changes are elementary schools: William Blackstone in the South End, Paul Dever in Dorchester, Ralph Waldo Emerson in Roxbury, Curtis Guild in East Boston, John Holland in Dorchester, John F. Kennedy in Jamaica Plain, Elihu Greenwood in Hyde Park, and William Monroe Trotter in Dorchester, a school that was once highly sought after by parents but that over the years has declined considerably in academic achievement.

Johnson initially identified Odyssey and the Greenwood for closing last fall, but gave the schools a second chance after a groundswell of support from students, parents, and staff. In the case of the Greenwood, Johnson said at that time that she was heartened by the growing involvement of parents, but expressed concern about a lack of teamwork among the Greenwood’s staff.

The schools range in size from 227 students at Emerson to 843 students at English, according to an Oct. 1, 2008, head count, which is the most recent enrollment data available on the state Department of Elementary and Secondary Education’s website.

Most of the schools are located in a swath of Roxbury, Dorchester, and a few adjacent neighborhoods, which suffer from high rates of poverty, crime, drug abuse, and teenage pregnancy.

Johnson has chosen to frame the area in a more hopeful light, dubbing it the “Circle of Promise.’’ She said it will take a committed partnership between schools, churches, community groups, and businesses to help children push through school and break the cycle of poverty.

Johnson said her office will work with the schools on finalizing a turnaround strategy and will hold meetings at each of the schools with staff, parents, and students to solicit their advice. The School Committee, according to a timeline released by the district, is scheduled to vote on the proposal next month. Changes are expected to go into effect by fall.

In an agenda carefully scripted by school administrators, the meeting kicked off last night with the East Boston High School color guard leading the audience in the Pledge of Allegiance. Shortly afterward, students from three schools, including Orchard Gardens, sang before the crowd. One selection included the “Glee’’ television show’s rendition of “Don’t Stop Believin’.’’

After the presentation, several leaders of the Orchard Gardens School said in an interview that they looked forward to the district intervening more aggressively at their school, where about 60 percent of students are Latino and 40 percent are black, two groups that tend to lag behind students of other ethnic and racial backgrounds on standardized tests statewide. Roughly a third of the students there are learning to speak English.

The school also has gone through five principals in seven years, creating much instability and making it difficult to execute a long-term improvement plan.

“People here are hungry for help and support,’’ said Karen Mapp, chairwoman of the school’s governing board. “We have a lot of new and enthusiastic teachers.’’

An earlier version of this story named Sarah Greenwood K-8 in Dorchester as one of the schools targeted for change, instead of Elihu Greenwood Elementary in Hyde Park.

© Copyright 2009 Globe Newspaper Company.
TARGETED FOR CHANGE
Your comment is subject to the rules of our Posting Policy
This comment may appear on your public profile. Public Profile FAQ