Maine expands its laptop drive to equip each high schooler 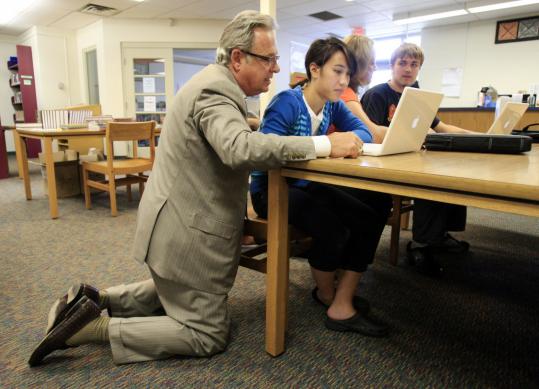 FARMINGDALE, Maine - The state that was the first to provide laptops to every seventh- and eighth-grader in its public schools is moving on to its high schools, with Maine’s top education official vowing yesterday that every high school student will have a laptop computer within two years.

The state is currently distributing 67,000 computers to more than half of its high schools. These will give students the skills they will need to compete in the workplace, said Don Siviski, superintendent of Regional School Unit 2.

“The competitive world that these students are going to be engaged in - it isn’t only the United States, the Northeast, or Maine. Their competitors are going to be all over the world. They need to be savvy,’’ he said. “Schools need to join the 21st century to prepare these kids for that world.’’

Under a four-year, $64 million lease, Apple Inc. will provide each student with a MacBook with a 13-inch screen, 160-gigabyte hard drive, built-in camera, as well as wireless routers, tech support, and warranty repairs. The cost is $240 per year per computer.

Maine’s education commissioner, Sue Gendron, wanted to expand the program to all of the state’s 119 public high schools, but had to settle with participation from only 64 this fall. The narrow window for high schools to sign onto the program over the summer and the nation’s economic turmoil prevented full participation, she said.

Still, Gendron said, Maine’s program - the first statewide program to provide laptops to students - is also the nation’s largest. The students are allowed to take the computers home, but they will not own them; the laptops have to be returned.

“Our young people really are digital natives,’’ she said. “We don’t want them to unplug when they come to school.’’

Yesterday, 10 students at Hall-Dale High School looked over some of the laptops that will be handed out over the coming weeks. They quickly began putting the laptops through their paces, creating comic strips and Andy Warhol-style photos with the built-in camera.

Unlike most high schools, Hall-Dale already issued laptops. So the Apple MacBooks will replace the older laptops.

The laptop program began under Governor Angus King, who wanted to eliminate the “digital divide’’ between wealthy and poor children.

Maine started by distributing more than 30,000 computers to every seventh- and eighth-grader in 2002 and 2003.