New teachers get lessons themselves 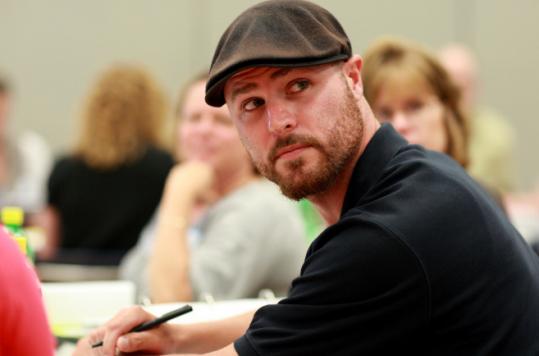 BRIDGEWATER - As she counts the hours until the first day of school, Kimberly Kelly can hardly contain her excitement about what awaits her at the Federal Furnace Elementary School.

A new school year is always exciting, but this one especially so for the Milton 24-year-old, who will take her newly minted special education degree to her very first classroom in the Plymouth public schools, teaching five K-1 students with autism.

She said the New Teacher Academy at Bridgewater State College, a two-day seminar that Kelly and 50 other new teachers attended earlier this month, was helpful. Sessions led by veteran teacher mentors from around the area were full of tips and advice to make the first week, and the first year, go well.

The academy was the first part of a three-part program between Bridgewater State College and Boston College funded with a multimillion-dollar grant from the Carnegie Foundation. Called Teachers for a New Era Partnership, the program offers the new teacher workshop before school begins, seven two-hour mentoring opportunities through the teacher’s first year, and subsidizes a three-credit graduate course for veteran teachers to improve their understanding of issues facing new teachers so they can be more effective mentors.

Academy leader David Almeida, an associate dean and professor in Bridgewater State College’s School of Education in Allied Studies, said the work covered in the workshop was meant to be a confidence builder.

“In their first year, teachers are expected to work like veterans, but they don’t send someone in to hold your hand,’’ he said. “In school, they’ve learned in class, passed tests, and written papers, but now they must put it all into practice.’’

For some, the seminar is a refresher course, Almeida said. “They say, ‘I remember that, I’ll be OK.’ For others, it’s, ‘I don’t remember any of that,’ and, for the rest, it’s a way to look at things now as a professional, instead of as a student.’’

The academy was financed by a three-year grant that was extended to a fourth year this year. Bridgewater State College must now find a way to fund and sustain it.

Almeida shared a few pointers during a short break in the seminar.

“The number one job on the first day is building a classroom community,’’ he said. “Confidence is very important. Things will follow from there.’’

Go in the door, smile, and be yourself, he advised the novices. Be firm and in charge, but supportive and flexible.

Jackie Etter, a sixth-grade English teacher at Mansfield’s Qualters Middle School, also had plenty of advice for the new teachers during her session, “Planning, Pacing, and Implementing - Getting Ready for the First Week.’’

“Twenty-five little children will change your day in a heartbeat,’’ she said.

Put up a friendly bulletin board that relates to what you’re teaching. Learn your students’ names. Welcome them to the classroom - and you’re on your way, she said.

Critical advice came from Judy Haughey, a third-grade teacher in Wrentham: “Don’t forget to give them a snack and bathroom break.’’

Ryan J. King of Pembroke is set to start his new job as a physical education teacher at the Furnace Brook Middle School in Marshfield. The 24-year-old said he got his job two days before the academy, and was still riding on the high of the news.

“I did a lot of coaching at the middle and high school levels, and I like that age group,’’ he said. “I’m pretty pumped about it.’’

King said he was most grateful for advice about classroom management and conducting parent/teacher meetings effectively - tasks he’s eager to try out on his own.

“Here, they tell you to think about the student first, but you’re so focused on your first day and nervous that you forget,’’ he said. “I will try to lay out what I expect, the things I want to accomplish, and tell them how I look forward to a good year.’’

Elsa Apostoli, 23, of Natick, has taken a job as a math teacher at Norwood High School, and said she could not wait for that “Aha!’’ moment when students begin to understand the concepts she’ll share.

“I’ve been thinking about the first day for a whole month,’’ she said.

On Sept. 2, as she officially enters her new classroom, Brogan said her mind will be wrapped around one thing: “I’ll be thinking, ‘Today is going to be a good day.’ ’’