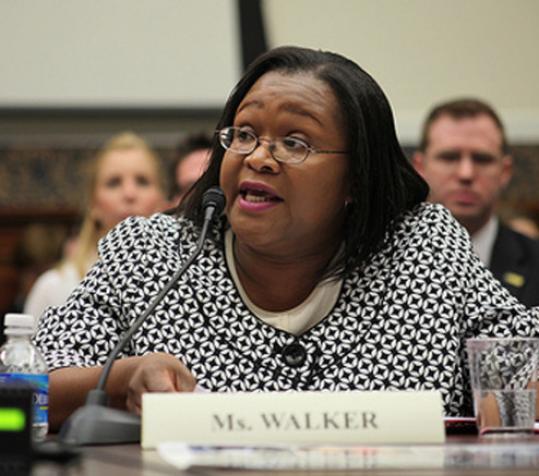 Sirdeaner Walker, whose son Carl Walker-Hoover, 11 (left), committed suicide after being bullied, favors a bill that would require states to invest in antibullying programs. (US House)
July 9, 2009
Text size – +

WASHINGTON - Amid growing criticism of the $787 billion economic stimulus package championed by President Obama, the chairman of the House oversight committee said yesterday that projects in some of the nation’s poorest areas don’t appear to be getting a fair shake.

Representative Edolphus Towns, a New York Democrat, said he was particularly concerned that transportation projects in economically distressed areas were being left out even though they are supposed to be a priority.

A Government Accountability Office report, released yesterday at a hearing before the oversight panel, said about half the money set aside for road and bridge repairs is being used to repave highways rather than to build new infrastructure. And state officials aren’t steering the money toward counties that need jobs the most, auditors found.

The GAO said the stimulus is keeping teachers off the unemployment lines, helping states make greater Medicaid payments, and providing a desperately needed cushion to state budgets. Investigators, however, found repeated examples in which, either out of desperation or convenience, states favored short-term spending over long-term efforts such as education overhaul.

The Obama administration intended the stimulus to jump-start the economy, build new schools, and usher in an era of education reform. But since Obama signed it in February, the economy has shed more than 2 million jobs, bringing to 6.5 million the net job losses since the recession began in December 2007. Unemployment now stands at 9.5 percent, its highest in 26 years.

The epicenter of the debate this week is Ohio, the traditional presidential bellwether state where Obama spent quite a bit of time campaigning and where a new poll this week had worrisome numbers for Obama.

Respondents in a Quinnipiac University survey were evenly divided over Obama’s handling of the economy - 48 percent approved, 46 percent disapproved - and his approval rating had dropped to 49 percent from 62 percent in May, while his disapproval number rose to 44 percent from 31 percent. Quinnipiac called Obama’s numbers lackluster, and said they were the lowest in any national or state poll it had conducted since his inauguration.

The Obama administration concedes that the continuing job losses are unacceptable, but says that the stimulus package was always going to take some time to have measurable impact. Vice President Joe Biden said over the weekend that the White House might have misread the depth of the recession; he plans to visit Ohio today to trumpet the stimulus. Clarifying Biden’s statement, Obama said in an interview this week that during the stimulus debate, the administration had incomplete information of how bad the recession was.

Mass. mother tells House about her son’s suicide
WASHINGTON - In the three months since Sirdeaner Walker’s 11-year-old son, Carl Walker-Hoover, hanged himself, the Springfield mother has channeled her grief into action. Walker appeared on “The Ellen DeGeneres Show’’ and “The Oprah Winfrey Show’’ to speak out on the dangers of bullying.

But that was just a warm-up. Walker, a self-described “ordinary working mom,’’ has become a persistent advocate for safer schools, and she will stop at nothing less than federal legislation. Appearing yesterday before two House subcommittees, Walker related Carl’s story again.

“What could make a child his age despair so much that he would take his own life?’’ Walker asked. “I will probably never know the answer. What we do know is that Carl was being bullied relentlessly at school.’’

Walker had known for months of her son’s situation, and so did the staff at the New Leadership Charter School in Springfield. She was unhappy with their course of action, and she attributes it to a lack of training. While school officials acknowledge they knew of the bullying, they say they handled the situation appropriately.

Walker supports a bill that would require states that receive grants for safe and drug-free schools to invest in bullying prevention programs. “Everyone at the hearing listened to Carl’s story,’’ Walker said afterward. “I really feel like now is the time that we look to the federal government for guidelines and leadership. Our children are suffering every day, in school.’’