Superintendent fails to make the grade

Lawrence’s Laboy on leave after tenure of tumult 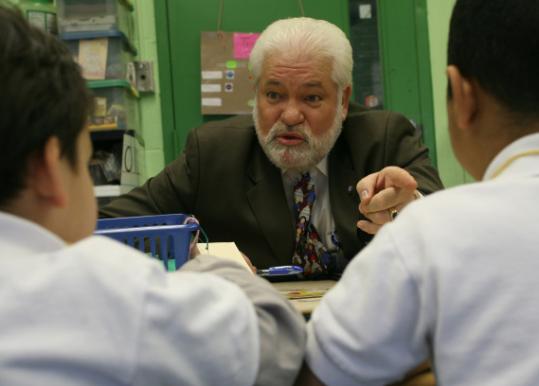 LAWRENCE - When he arrived here nine years ago from the Brooklyn, N.Y., schools, Superintendent Wilfredo Laboy was seen as a stabilizing force, a savvy, unflappable figure skilled at coaxing order out of chaos.

With high hopes, he was hired to salvage a broken school district, to rescue a system nearly synonymous with scandal and clear the slate.

That, to put it gently, did not happen.

Instead, Laboy has carried on the Lawrence public schools’ legacy of crisis and conflicts with a staggering series of setbacks, culminating last night when the School Committee placed him on paid administrative leave pending a criminal investigation into alleged financial wrongdoing in the School Department. Even for Laboy, who has confounded critics by surviving one controversy after another, this may prove to be the last straw, observers say.

After the decision, Mayor Michael Sullivan, who chairs the school board, said the panel and the city hope to get the issue behind them. “We in no way want to interfere with the investigation,’’ he said.

According to Sullivan, Laboy and his attorney had been made aware of the unanimous decision before they left the building surrounded by police and the media.

Outside, attorney Scott Gleason said Laboy had worked for the school system for nine years and “has done it with the utmost dignity, care, and ability.’’

“The answer to each and every allegation that has been made [is that] he’s done nothing that is wrongful from a moral, legal, and ethical perspective,’’ Gleason said.

School board vice chairman Greg Morris said the committee did not act by emotion, but did what was best for the schoolchildren and the city.

The acting superintendent, Mary Lou Bergernon, will continue in that role, now that Laboy has been placed on administrative leave.

Laboy, 58, has been on medical leave for work-related stress since mid-May and had planned to return to work next week. His new leave followed mounting public anger over what locals have dubbed “Snoopgate,’’ in which Laboy’s special assistant resigned in the spring after police discovered that he had used school computers to conduct unauthorized background checks on more than 400 people.

“Things have fallen apart, and nine out of 10 people say they’ve had it,’’ said Jim Vittorioso, a School Committee member. “He was going to turn a failing system around, but things have been running off the rails. The city’s being disgraced.’’

Laboy’s troubles have only deepened in his absence. Last week, state and local police raided his office and on Tuesday confiscated computer equipment and files from his home.

The state’s Office of Campaign and Political Finance is also investigating whether School Committee members and other politicians who have supported Laboy have been allowed to print campaign literature for free on the district’s industrial printer.

“For many years, I’ve been saying he treats the Lawrence public schools like it’s a plantation and he’s the owner,’’ said Dalia Diaz, owner of the bilingual newspaper Rumbo. “He’s weaved a web of favors that only the insiders can understand.’’

Authorities, who would not comment on the financial investigation, have not filed charges against Laboy or other school officials. Laboy, through his attorney, denied any wrongdoing. The investigation was apparently sparked by a School Committee member’s complaints to authorities.

Laboy told the Globe shortly before his medical leave that he was proud of his tenure and that the flaps, however frequent, should not overshadow the system’s progress on his watch.

“This is a better system than when I arrived,’’ he said. “People can’t take that away from me.’’

On Tuesday, as investigators were again searching School Department offices, School Committee members were furious that Laboy had not returned his city-leased sport utility vehicle as they had requested. The snub was the latest in a long line, many said.

“Enough is enough,’’ said Martina Cruz, a committee member who wants Laboy fired. “He doesn’t take us seriously and just does as he pleases. It’s a shame for the community.’’

After last night’s action, she said, “It’s always painful for some members, but it is a decision all of us needed to take.’’

Critics said Laboy’s penchant for high-profile gaffes have long since grown wearisome. A native of Puerto Rico who moved to New York City as a young boy, he failed a required English proficiency test three times while in charge of Lawrence’s schools.

He billed the district for running boards on his SUV, saying his wife was having a hard time getting in and out of the vehicle in heels. He was involved in a scuffle with a female School Committee member in his office. An outspoken, at times abrasive personality, he sparked minor dust-ups that are too numerous to mention, teachers and board members said.

All the while, Laboy not only survived the harsh public scrutiny, he received consistent praise for improving the struggling system. He drew strong reviews and raises from the School Committee, boosting his salary to around $200,000.

He has also enjoyed durable public support for his efforts to shake up what many describe as a moribund system, Cruz and others said, and his commitment to immigrant children who enter the schools speaking little English.

Sullivan, who is seen as Laboy’s staunchest defender, said he voted to place him on paid administrative leave because it was the most sensible course of action during a criminal investigation. Still, he gives the superintendent high marks for taking a struggling school system to a higher level.

“There’s been unbelievably great work done throughout the School Department,’’ he said. “I judge the superintendent on his quality of work, and he has really accomplished a lot.’’

Sullivan said he believes Laboy was not personally responsible for many of the firestorms, and that the controversies that earn headlines do not tell the full story of his tenure. He said he remains hopeful Laboy can complete his term “with his head held high.’’

Frank McLaughlin, president of the Lawrence Teachers Union, has frequently clashed with Laboy. McLaughlin said the recent turmoil has “cast a dark cloud over the system.’’ Laboy’s paid leave, he said, signals a “light at the end of the tunnel.’’

“Some days I think he thinks he’s Donald Trump and my teachers are the apprentices,’’ he said. “It would be humorous, but it’s tragic.’’