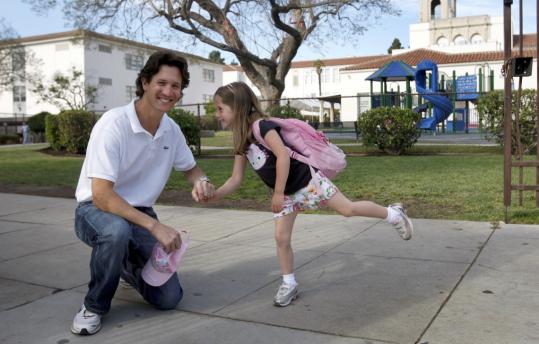 LOS ANGELES - Emulating a controversial practice at many colleges, two high-achieving public school districts in California are giving preference to the children of alumni.

The policies appear to be the first in the nation at public schools, education observers say.

The programs vary slightly, but leaders of both districts say they hope to raise money by forging closer ties with alumni who may be priced out of their hometowns as well as with grandparents who still live there.

In each district, nonresident legacy students will make up a tiny percentage of the student population, officials said.

"I'm taking a page out of the university or college playbook," said Steve Fenton, a Beverly Hills Unified trustee. "Alumni are the lifeline for any academic institution."

But critics contend that such policies are antithetical to American public education.

"It's antidemocratic," said Mark Rosenbaum, legal director of the American Civil Liberties Union of Southern California. He said public schools were created as places where "merit was to be rewarded, and birth and economic advantage was to have no place."

Many universities and colleges have long offered preferences to the children, grandchildren, and siblings of alumni, accepting them at greater rates than applicants overall, sometimes with lower grades and SAT scores.

Universities' arguments for legacy admissions - to nurture connections with alumni and their checkbooks - have been upheld as constitutional.

But the policies can cause campus controversy, leading some schools, including the University of California in 1998, to vote to abolish them.

Private elementary and high schools, including Harvard-Westlake and Marlborough in Los Angeles and the Fairmont schools in Orange County, say they offer children of alumni an admissions advantage if they meet other requirements.

Beverly Hills adopted its legacy policy on a 3-2 vote last spring, allowing the children of anyone who attended city schools at least four years and whose grandparents have lived in the city for at least a decade to apply for permits.

Eleven students, among 5,100 enrolled in district schools, attend school under the program.

Fenton said he proposed the idea to reconnect the district with grandparents who live within its borders and no longer have a direct stake in the city's schools yet are asked to vote on school measures, such as a $334-million facilities bond passed in November.

Fenton also said the district needed to forge closer ties with its alumni and pointed to an example of the benefits such connections can bring:

The Beverly Hills Athletic Alumni Association in recent years has raised more than $1 million for uniforms, scoreboards, and other purchases, he said.

To round out classes and maximize state funding, the 12,000-student Santa Monica-Malibu district has long offered permits to the children of district, city, and community college employees, siblings of current students, and others who moved away.

After those, it also has given permits to some nonresident students without connections to the district.

But the board voted unanimously in April to give alumni children priority over this last category of students, starting next school year.

"If we're going to be giving out additional permits to students who live outside the community, the board felt we wanted to give them to people who had a tangible connection to our community," board member Ben Allen said.

He also said the policy was a response to soaring housing prices that have hurt diversity in the district and priced out younger families.

"It would be more efficient from a fund-raising standpoint to auction off education slots on than to create a legacy preference," said Michael Dannenberg, director of education policy at the nonpartisan New America Foundation.