For children, an urban lifeline 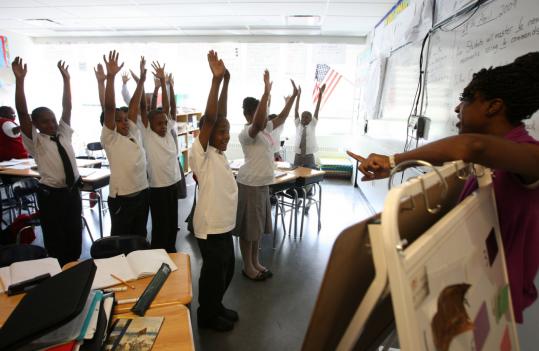 NEW YORK - The effort to help children in this one large swath of Harlem begins even before they are born, as street workers walk door to door, encouraging pregnant young women to attend a free crash course on parenting.

From there, many of the children enter a free preschool program, where they learn their ABCs and 123s, not just in English but in Spanish and French. Schools are not just for learning, but a place where children can get their teeth cleaned, eat organic fruits rather than processed foods, and receive treatment for asthma, which is common in their neighborhood.

The children are part of a surprisingly successful large-scale urban experiment known as Harlem's Children Zone, a collection of programs that President Obama is looking to replicate across the US and that Boston activists are eager to bring to a poverty-stricken corridor that slices through the heart of the city.

At its core, the more-than-decade-old program, which encompasses 97 city blocks, is at once simple and complex. It takes existing disparate social service programs commonly available to families, and brings them together in an attempt to improve the well-being of children in their homes and neighborhoods - a key element often missing in overhaul of public education. If children are not well fed, well rested, or in good health, they face immense odds of succeeding in school.

Today, a group of Boston nonprofit leaders - led by City Year's Hubie Jones - will be touring the zone, as they launch a campaign to make the city one of Obama's chosen sites. Obama is calling his endeavor "Promise Neighborhoods," a nod to the program's success in boosting student achievement and reducing hospitalization rates for children with asthma, among other feats.

"It's time for Boston to think differently about how to deliver programs to these really distressed neighborhoods," said Jones, who will be blogging from today's tour as part of his effort to generate local interest. "If the Harlem Children's Zone or something like it is a good idea for Boston to do, we ought to get ready for it or we will be passed over by the Obama administration."

The flagging economy, which has led to a decline in donations, has fostered a willingness among nonprofits to work together to address common goals. He noted that local nonprofits have been talking for years about visiting the Harlem Children's zone, but only organized recently.

"When you have a period of high anxiety, you have a chance to get people to collaborate when they otherwise may not," Jones said.

The White House has released few details about replicating the Harlem Children's Zone beyond saying that it will be part of Obama's budget proposal next year. On the campaign trail, Obama said that rolling out the program would be among his first major steps to combat poverty. Obama estimated the program could cost a few billion dollars a year to run in 20 cities; the federal government would pay half the expenses, he said, while cities, philanthropists, or businesses would cover the rest.

Jones and about a dozen other nonprofit leaders are looking to bring this intensive support network to an area that would encompass much of Roxbury Crossing, Grove Hall, and Uphams Corner, as well as many small neighborhoods in and around Blue Hill Avenue, as it runs from Roxbury through Dorchester to Mattapan.

The corridor is home to a large concentration of the city's roughly 110,000 children, but the neighborhoods are plagued with the kinds of obstacles that could hamper or block their success in school or later in life. Day after day, these children must contend with poverty, violent crimes, unemployment, housing foreclosures, and abandoned properties, according to research conducted by a Tufts University professor for the local nonprofits.

The children also run greater risks of premature death as newborns or toddlers, or being diagnosed with asthma or elevated levels of toxins in their blood stream because of exposure to lead paint, poor air quality, or other unhealthy environmental conditions, the research showed.

"We can call this a children's zone in Boston, but it's not a good children's zone when you look at the number of children dealing with a whole range of health issues and other obstacles," said James Jennings, a professor of urban and environmental policy and planning at Tufts University, who developed the proposed service area in Boston after examining reams of data.

Jones and other nonprofit leaders have not yet decided whether operating such a program here would require establishing a new nonprofit or a coordinated board of directors among existing nonprofits. It is also not yet clear how much such an effort would cost or whether it could cultivate the necessary private support.

Charitable giving supports about 70 percent of Children's Zone's $64 million budget, with the rest covered by state and federal dollars. A recent decline in donations has led to layoffs at the program and a delay in expansion plans.

In Tuesday afternoon's sweltering heat, hundreds of teenagers poured into after-school programs in schools, a church building, and other locations across Harlem, where they took karate, studied for state standardized tests, worked on college searches, and learned to shoot videos for an upcoming documentary.

"It keeps you safe and off the streets," said Kristine Lyon, 14, a ninth-grader at a local high school, who was putting together a teen-oriented magazine. "Most kids don't know what to do with themselves. It's a good place to meet people."

The Children's Zone operates two charter schools, which have been the sites of some its greatest successes, with students scoring high on state standardized tests. The nonprofit did not set out to run its own schools, but earlier this decade took take advantage of a favorable climate among city and state leaders for opening charter schools, explained Marty Lipp, the organization's spokesman.

The program, however, has not turned its back on the city-run schools, dispatching volunteers to help out teachers.

Boston leaders have not yet decided whether they would run their own charter schools or just work with several public schools already operating in the zone. Boston has almost reached the maximum number of charter schools allowed by the state.

Paul Reville, the state's secretary of education, said in an interview that the administration is eager to bring a children's zone to Massachusetts. Governor Deval Patrick's proposal to overhaul public education, now stalled by the economy, emphasizes coordination with social service programs from cradle to college.

"It tests the assumption that if you could create a network of middle-class supports for poor people you will get comparable results," Reville said. "The preliminary results are very promising."