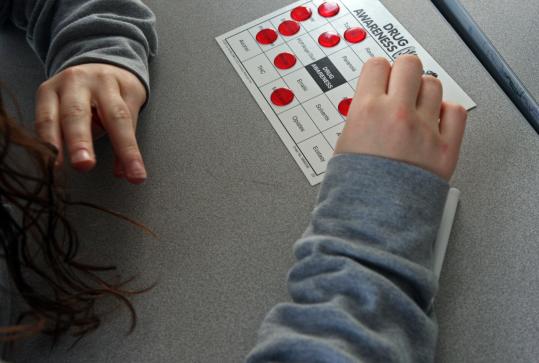 At the Castle, Dr. Joseph Shrand (below) uses many unusual methods to reach his young clientele. Above, a teen plays a bingo game based on drug facts. (Photos by Michele McDonald/Globe Staff)
By Steve Hatch Globe Correspondent / December 11, 2008
Text size – +

"Form that cocaine comes in."

"Powder," said one, marking his card.

"Angel dust," they all chimed in, marking their cards.

"Substance obtained by smoking or chewing."

Bingo! Unorthodox approaches are common at the Castle, which stands for the Clean and Sober Teens Living Empowered program and also describes the turreted Victorian building in Brockton that houses this initiative for treating substance abuse by adolescents.

The 24-bed inpatient center, which is for 13- to 17-year-olds with substance-abuse issues, was opened in September under a state contract.

"This is a brand-new level of care that never existed before," said Fran Markle, vice president of the regional High Point Treatment Center, which offers services to adolescents at an old pump house on Meadowbrook Road.

Until now, treatment options for adolescents were limited. "They don't need to be with 40-year-old men and women who are living that addiction lifestyle," Markle said.

"We chose Brockton because we thought that was a good place to exist, centrally located, and Brockton has its own need, anyway," said Markle.

The youths stay an average of two weeks and receive intensive treatment, which can include detoxification and always includes being treated with dignity and respect as staff members help them sort through their issues, said Dr. Joseph Shrand, medical director and the psychiatrist who devised the treatment approach.

His concept, which he has dubbed "the Imax equation," is that everyone does the best he or she can. The Imax equation involves family, biological/genetic, social, and self-image domains, and the children try to work through their issues in each category.

"Ultimately, the most we can do is help a kid prepare for what they need to do, which is remain abstinent in the community and finish school," Shrand said.

Most are there voluntarily; some have been ordered by a court. They come from the south suburbs and beyond in Eastern Massachusetts.

"They're out of bed by 7 a.m., doing programs or some activity," said Shrand. Teachers from Education Inc., who continue the children's education, give other staff members advice on each child's learning style. The multidisciplinary approach includes therapists, such as Ellen Ficks, who ran the substance-abuse game mentioned above; recovery specialists; nurses; and other assistants. A minister conducts nondenominational sessions weekly, and clinicians are always on duty.

Families are involved as deemed appropriate. "The parents of these kids sometimes feel horrible about how they've handled things," Shrand noted. "For families that bring these kids in, it gives them a different approach and a different hope."

His approach requires staff training in reacting with respect even when confronted with disturbing behavior. "You don't have to like it, you don't have to condone it, but you do have to respect it," he said.

When the youths arrive, "they're a little bit unstable," said assistant medical director Michelle Wood. That can be challenging for the staff. Tempers can fray but must not snap. Patients are not punished for their behavior, though bad behavior is not countenanced. She helps guide the staff through that.

"We have staff at all levels of skills," she said, and some have been let go when they failed to absorb the system.

Sometimes, Wood said, the youths are "crawling out of their skin," so they are allowed to read to the group, or pace while others sit. If it's really bad, they can go to the sensory room, a quiet, out-of-the-way corner with a beanbag bed and soft music and heavy blankets, all designed to let youngsters get in touch with their feelings and regain calm.

Wood says it all is working: "We haven't had a single fight."

The patients are divided into teams of up to eight, and roomy bedrooms with brilliantly painted furniture sleep four each. There are meeting rooms, a central dining area, and a spiritual room in one of the towers.

The Castle program is one of only two inpatient adolescent treatment centers in the state. The other is in Worcester, and both were opened this year as a result of a five-year state effort to address substance abuse among teenagers.

"Families are in crisis. They're in crisis about their juvenile drug-abuse situations," said Michael Botticelli, director of the state Bureau of Substance Abuse Services. Youths can wind up in the criminal justice and mental health systems. "They weren't necessarily getting directed to the appropriate level of care," he said.

The state responded by opening three "recovery high schools" and the two inpatient centers. Joanne Peterson of Learn to Cope, a Raynham-based support group for families of addicts, said her group was monitoring the incidences of drug overdoses to see if more facilities are needed.

The adolescent focus is important, Botticelli said, in part because of the impact substance abuse has on families and in part because "we know that early tobacco use and early alcohol use are a direct predictor of future addiction problems." He noted the majority of adolescent substance-abuse admissions are for alcohol and marijuana, though there is a growing problem with abuse of prescription drugs.

At the Castle, a 16-year-old waiting to go home said his drug of choice was "anything I could get." He said he was clean and would remain so, and while he understood the family, social, biological, and self-image components of Dr. Shrand's treatment system, the Imax equation itself, with its Greek symbols and math references, threw him.

What the four bingo players, whose names are withheld to protect their privacy, understand is that it's working for them.

"Cravings are going to come back," said another, "but it's how you deal with it."

It isn't easy, they said. A 17-year-old boy had been in four detox centers and attended the William J. Ostiguy Recovery High School in Boston. It's the Castle that has helped. "It's a different approach. They don't shove it down your throat," he said.

"You have to be here and actually do the work to get something out of it," said a 17-year-old girl.

"You learn to hold back your anger in different ways," said a 16-year-old girl. "You learn a lot about yourself."

Steve Hatch can be reached at SteveLHatch@gmail.com.