Having a field day

On visits to Cohasset farm, hundreds of students escape the indoors for hands-on education 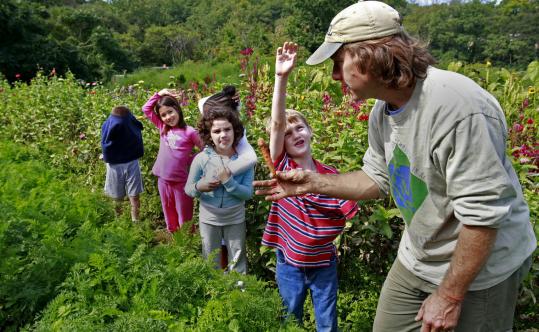 Jon Belber takes the motto "no child left inside" seriously when he brings students of all ages outside to work, and learn, in the dirt.

He sees his approach as an antidote to one consequence of the federal education policy, which holds students to high standards but, critics claim, can leave no time for hands-on learning that is harder to quantify.

Outdoor experiences are particularly important when so many kids spend hours indoors on computers or playing video games, said Berber, the director of education at Holly Hill Farm in Cohasset.

About 1,200 students went to Holly Hill Farm in Cohasset last year to help prepare the soil, plant, and harvest in the "education garden," a fenced area about 120 by100 feet that at this time of year still teems with herbs, rainbow kale, beans, potatoes, pumpkins, and the occasional tomato.

The children get to see a farm up close, while teachers get inspiration for lessons in subjects ranging from science to art, and some school cafeterias even get some tasty and healthy treats.

"What the kids get out of it is responsibility and a new experience," said David Labbe, a teacher at the South Shore Educational Collaborative in Hingham, where special needs students in grades 1 through 3 visit the farm and use what they learn to tend a garden they built at their school.

"We just finished a lesson on when to plant and equated it to math," said Labbe. "When we built the farm beds we did some measurement - more math. But the biggest thing is they've tried new things.

"Some of the kids had never been to a farm. There are chickens and goats and there was a rabbit that unfortunately passed away, so we had to deal with loss. Some kids had never gotten dirty; the benefits of that alone are fantastic for them. Besides that, you get cool stuff to eat and you can't go wrong with that," Labbe said.

The 140 acres of Holly Hill have been farmed since Colonial times and owned by five generations of the White family since the 1840s. Frank and Jean White took over in 1998 with a goal of growing organic vegetables, fruit, and flowers and providing the community with an educational resource. Four years later, the Friends of Holly Hill Farm incorporated as a nonprofit to support the educational programs.

Belber, 39, left a teaching job at Milton Academy to become Holly Hill's first official education director in 2003. "The classroom is appealing, but I like the outdoor classroom better," he said.

One of the first schools to partner with the farm was the South Shore Charter Public School in Norwell, which brings students throughout the year to a separate garden where they grow a microcosm of what's planted at the farm.

"It's a wonderful model," Belber said. "The kids have a real sense of knowing what it's like on a farm through the months. In June, we have a salad party and in the fall they take stuff back to the classroom and roast beets, make ratatouille and pasta sauce."

Belber used the model to develop the "education garden" for other visiting schools - "a community garden for whoever is here," he said. He's also expanded the theme of feasting on what you harvest.

The Jenkins Elementary School in Scituate recently harvested its garden and served the bounty during school lunch time. With Belber's help and recipes, the parents used the produce and school cafeteria to create such delicacies as tomatillo salsa, garlic bread, and kale chips - a crispy, salty snack that was a big hit, according to principal John J. Willis.

"It was really neat to see how excited the kids got over salad, too," he said. "They saw the food grow in our own garden - they helped make it plentiful and beautiful."

But the benefits go beyond making kids salivate over healthy food, Willis said. The garden is a great resource for teachers, who use it for science experiments, creative-writing inspiration, and art lessons, he said. The school cafeteria composts its garbage and the resulting soil is tilled back into the garden - a lesson in recycling and the cycle of life, Willis said.

Teachers also call on parents trained by Belber to see if the garden can be used to address other parts of the curriculum, Willis said.

Belber and others have developed a curriculum guide that provides 15 lesson plans that use gardens for teaching about soil, plants, and earth science, all tied to the state's science requirements. "A Growing Relationship: The School Garden, Classroom and Organic Farm" is intended for both elementary schools and farms, Belber said, and was published with a grant from the Frances R. Dewing Foundation in South Attleboro.

"The big thing for me is it really gets kids to see relevancy in science," Chuck Cormier, principal of Plymouth River Elementary School in Hingham, said of his school's garden and involvement with Holly Hill Farm. "You're not looking at small test tubes of soil or growing lettuce in a baggie . . . It becomes a real-world experience."

And it's fun, according to Janice McPhillips of Hingham, who works with Belber.

"We were at the Hatherly School in Scituate digging up their garden and all the boys were saying, 'I love science,' " she said.

Holly Hill Farm is at 236 Jerusalem Road, Cohasset. More information about the school programs is available by contacting Belber at jbelberhollyhill@hotmail.com.