Improvements in place, challenges ahead as 20-year BU takeover ends 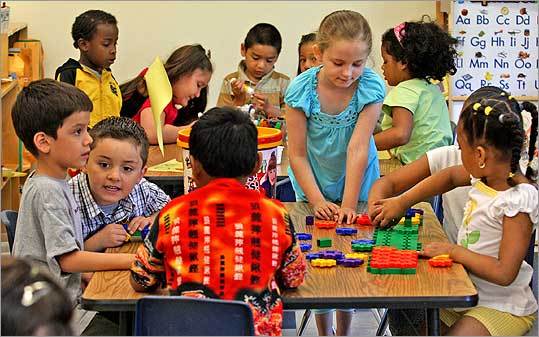 CHELSEA - Two decades after being taken over by Boston University, the schools in this blue-collar city on the other side of the Tobin Bridge now sparkle instead of crumble. Students are more likely to graduate from high school than to drop out. Art and music programs have been implemented in the elementary and middle schools, and high school students can now take a plethora of Advanced Placement classes.

And yet, problems persist in this district of 5,500 students. Despite an increased focus on early childhood education, just a third of third-graders scored proficiently on the state reading test last year. In the middle school, 58 percent of eighth-graders failed the state math test. In a district run by a private university, less than 30 percent of high school graduates said they planned to attend a four-year college last year.

These are the challenges that the Chelsea School Committee will face when it regains control of its schools tomorrow. And as urban districts across the country struggle with similar circumstances, many are watching to see whether Boston University's promise to make Chelsea a national model of education for the next century will shine as an example or fade into oblivion.

"The investment has paid off, but it's also clear there is more work to be done," said Joe Rappa, former director of the soon-to-be-closed Office of Educational Quality and Accountability, which audited the state's school districts. "And there's a question of whether all this will be sustainable."

The plan for BU to take over Chelsea schools was hatched out of desperation and determination. In Chelsea, school board members realized that the city's widespread corruption and cronyism had gotten so bad that the schools couldn't serve their students. John Silber, then president of BU, saw an opportunity to bring the expertise of a school of education to the struggling district in much the same way a medical school would provide clinical services to an impoverished community. Calling the current system "institutionalized child neglect," Silber led an effort that promised to transform the high-poverty, high-minority system.

"To have the opportunity of showing what really could be done in a really terrible school district like Chelsea seemed to be a very attractive possibility," Silber said in an interview this month.

In an unprecedented move, Chelsea officials voted to give their governing power to BU, allowing university managers to determine the budget, negotiate contracts, and hire and fire personnel. The terms of the agreement were outlined in a 41-page contract and a list of 17 goals was drafted, including improving teacher pay, building new facilities, and improving student performance.

Not everyone was pleased by the idea. The teachers union sued to block the deal, saying that giving public functions to a private body violated the Massachusetts Constitution. A group of Hispanic activists also filed suit and protested, saying their community was not adequately involved in the process.

"Would you like someone coming into your city and telling you how to do stuff?" asked Elizabeth McBride, a longtime School Committee member who voted against the plan in 1989 and left the school board this year.

Implementing change in a district accustomed to chaos proved difficult. Soon after the takeover, the City of Chelsea went bankrupt and the state Legislature appointed a receiver to guide the city back into the black. Facing a multimillion-dollar budget shortfall, BU could have walked away.

But the university stayed on, starting a nonprofit organization to raise funds for the district, revamping the academic curriculum, and securing $115 million in state funds to build the city's first new schools in more than eight decades.

With the changes came a change of heart for many opponents, including McBride.

"Instead of people moving out of Chelsea to get away from the schools, people from other towns started lying about where they lived so they could get in," she said. "Boston University helped wake up the community to the fact that we need good schools."

The university's original 10-year agreement with the city was extended for five years in 1998 and for another five years in 2003. In that time, professional development for teachers was made rigorous and relevant, and the district was brought into compliance with state and federal special education guidelines. A system that once relied on corruption and bribery got things done through grit and determination.

Former superintendent Doug Sears remembers getting a phone call in 1996 on the Friday evening before the city's new early learning center was slated to open, informing him that the district would have to delay the start of school because buses weren't available.

BU officials scrambled over the weekend, assembling a crew of drivers from the university's medical school shuttle service to provide transportation for the district. The school opened as planned.

"We were not going to delay that opening," said Sears, who is now assistant provost at BU. "We wanted to show we were serious about using every instructional day.

But not all challenges proved as easy to tackle. Despite two decades of involvement and $27.9 million in supplemental funding from the university and private donors, BU officials have not been able to overcome the obstacles of poverty, language, and mobility that affect so many of Chelsea's students.

Though test scores there have improved over the past decade, Chelsea remains classified a "low performing" school district by the state. The city has the second-lowest four-year graduation rate in the state, with 53 percent of students.

"I think there's been a lot of underestimating of the complexity of Chelsea's challenges," Superintendent Thomas Kingston said.

BU and Chelsea officials say that student mobility is a major contributor to the problem. Each year, roughly a third of Chelsea's students leave the district and many are replaced by students from other countries who don't have a full command of English, and who may not have had consistent schooling.

Even Silber, who says the effort was a success, admits that the project didn't accomplish everything he hoped it would.

"I'd be pretty second-rate if I was satisfied with what happened," he said. But, he added that lagging student performance there isn't a result of BU's efforts.

The averages, Kingston said, do not tell the full picture. Students today have access to state-of-the-art technology, a rigorous curriculum, and art, music, and theater programs. Motivated students can now graduate from Chelsea fully prepared for college and life, he said.

"It's hard to understand how stressed and dysfunctional this system was," he said. "We're not anywhere where we hope to be, but it's an uphill battle and we're moving in the right direction."