Some see quality, others arrogance in Newton North project 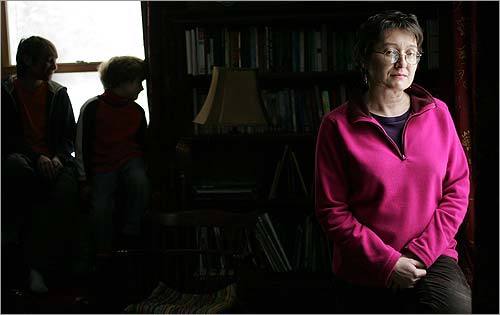 Michelle Ciurea said she moved to Newton because of the system's reputation. Her two children are shown behind her. (Globe Staff / Essdras M. Suarez)
Email|Print| Text size – + By Keith O'Brien Globe Staff / February 11, 2008

NEWTON - From the beginning, no hyperbole was spared when discussing the proposed Newton North High School. The mayor said it would reaffirm the city's commitment to top-notch education, the architect said he hoped to build the best high school in the country, and voters ultimately supported building the most expensive school in state history. The public schools, after all, are why many people moved to Newton in the first place.

But now, with the estimated cost of the new school ballooning from $141 million to $186 million and beyond, and one state official referring to it as a Taj Mahal, Newton parents and officials are locked in a citywide argument over whether to stop the project until it can be brought under control. In the process, a city that values education is asking a question that stabs at its civic soul: Just how much is too much for a public high school?

The answer depends on whom you talk to. But with Newton poised to spend nearly $100,000 per student to build the school, far more than any other district has spent on similar projects in recent years, some critics want to stop the bleeding now. And for them, the luxury school - once a shining example of Newton's commitment to youth - is becoming a symbol of bungled management, suburban excess, and educational expectations run amok.

"It embodies a kind of arrogance," said Michelle Ciurea, who left Somerville with her husband and two children in 2002 and moved to Newton, where the schools typically rank in the top 20 percent of districts in the state, or better, in terms of MCAS test results. "Just a sense of entitlement, that our kids are entitled to a education all the way, and common-sense compromises might be OK in other communities, but not for Newton kids. I think it's led us down a path that has been disastrous for the city."

Ciurea, and others in Newton, blame Mayor David B. Cohen, who has championed the school project since 2003. They accuse him of withholding the true cost from voters from the start. They allege that he is building a monument to himself - when a more modest school would have served students just fine - and many are now calling on the city to stop all work before construction workers begin pouring the foundation this week.

But Cohen, first elected mayor in 1997 and facing reelection next year, has continued his push - with support from a considerable number of residents. The problem, he and others told the Globe last week, is not the new building's jagged design or other high-minded architectural features, such as its glass-walled cafeteria, but, instead, bad luck.

Since the project's groundbreaking in July behind the existing brick-behemoth high school, construction crews have encountered delay after increasingly expensive delay. As a result of these and other problems, the project's completion date, once expected to be December 2009, has been pushed back to September 2010, meaning many students attending Newton North now will never set foot in the new school. But Cohen says the most prudent course is to keep going.

"The idea that somehow design features of the building are driving the cost of this building is simply incorrect," Cohen said. "This is a facility that I believe meets the needs of the kids of the City of Newton and will be a first-rate learning facility for generations to come."

The existing Newton North building is just 35 years old, but it has long suffered from problems, including a poor ventilation system, a lack of natural light, and poor temperature control. The building's architecture, brick-orange and boxy, also would not win many awards.

The new school, by contrast, is intended to be an antidote. Designed by a team led by world-renowned architect Graham Gund, the new Newton North would feature a zig-zag shape, windows in every classroom, and a student restaurant. There are plans for tennis courts, a track, and a 2,000-seat stadium. Inside, Gund's design calls for a swimming pool and a 650-seat auditorium with an orchestra pit.

"Did he add design elements that were more expensive? Who knows?" said Dr. Michael Jellinek, who supports the plan, despite his former role as chairman of the citizens' task force that recommended in 2003 a renovation and addition to the old Newton North. "We're talking about a very big building, over 400,000 square feet, and I think most of the costs are not because of vanity."

The mayor and his supporters say the project is what the people voted for a year ago and what the students need. Such a school, they said, will enhance the value of being a Newton resident in ways that are as tangible as they are intrinsic.

"This is the kind of high school that people in Newton expect and, I think, frankly deserve," said Alderman at Large Ted Hess-Mahan. "I think people come to Newton because of the quality of life and the quality of the schools. One part of that is obviously the quality of our educational programs and teachers. But the other part is the facilities that we have."

And so, even with some cost estimates flirting with the $200 million threshold, there are those in Newton who believe the future home of the Tigers is designed exactly the way it should be.

"It's not a Taj Mahal run wild. It's program-driven," said Mark Wadness, father of two and co-president of the Newton North High School Parent Teacher Student Organization. "Now, if the citizens decide it's not worth it, we can cut back on all the programs. But personally, if you're asking me, I think we should try to find a way to pay for it."

It is a refrain heard across the Commonwealth in communities that struggle to pay for new school construction. A new or renovated high school in Wellesley, for example, could cost more than $150 million, and one already begun in Quincy could close in on $127 million. But some, including state Treasurer Timothy P. Cahill, are troubled not just over the rising price of the proposed school, but by what they see as an unseemly devotion to having it all.

"From the inside as well as from the outside, this does not put the state, or the city, or education in the best light," said Cahill, who oversees $46.5 million in state funding that the Department of Education ponied up for the Newton project in 2004. "Our job is to educate the kids and create communities ideal for that - not to build Taj Mahals."

Much has gone wrong in recent months - from an undetected ledge found beneath the ground's surface that needed to be removed to the realization that the cafeteria as planned was too small and needed to be expanded to the tune of $1.2 million. But many critics believe the problem lies with the design. Steve Hamilton, a Newton resident and architect, says the mayor is building a luxury high school when a conventional new high school would have done the trick. He advises revising the design before going any further, replacing crooked angles with right angles.

Others are just stunned by the latest price estimates.

"I would have to say it does not compute," said recently elected Alderman at Large Greer Tan Swiston. "A high school building? Two-hundred-million dollars? Are you serious?"

Swiston and others worry that the large investment into one school might lead to educational shortfalls elsewhere in a city where taxpayers are also being asked to consider a Proposition 2 1/2 override that Cohen maintains has nothing to do with the rising Newton North costs. Already there is talk in Newton that the schools might need to lay off as many as 100 people this year, if voters do not approve that property tax increase this spring. And many residents say it is the teachers, not the school buildings, that do the most to attract people to Newton's educational system.

Now, if Cohen gets his way, the north side of Newton will have one of the finest new school buildings in the state. But even so, it would hardly be the only nine-figure high school.

Take Lawrence High School, for example. The 565,000-square-foot school, finished in August, includes nine buildings connected by glass skyways. There is an auditorium twice as big as the one planned in Newton, tennis courts, and an indoor track - details similar to Newton's in many ways, except one.

The final cost last fall in Lawrence was a relative bargain: Just $110 million.