Before World War II, pilots couldn’t figure out where they were without someone’s help. Aviation pioneer Charles “Doc” Draper, who earned three degrees from MIT, insisted against prevailing wisdom that everything a plane needed to fly could be put into a “black box.” Using a complex combination of spinning gyroscopes and sophisticated computer calculations, the MIT Instrumentation Laboratory he established created the first “inertial guidance system,” flying from Hanscom Air Force Base to Los Angeles on the provenance of instruments alone. It was critical for airplane flight and for a precise piloting system for ballistic missiles, and it made the Apollo space missions possible.

Robin Chase, an entrepreneur trained at MIT’s Sloan School of Management, made not owning a car the club people wanted to join. Chase has moved on, but Zipcar, created in 2000, has grown to a fleet of 8,000 with 550,000 members in 60 cities.

If we ever see cars that get 100 miles per gallon, it will most likely be thanks to researchers at MIT’s Sloan Automotive Lab, an incubator for improvements in car engines for half a century. Under recent director John Heywood – called “the Yoda of cars” by some – researchers have developed a low-cost method for injecting small amounts of ethanol at crucial times into the engine to dramatically improve fuel performance – by 20 to 30 percent.

It might be the smartest bicycle wheel ever. In 2009, a team from MIT’s SENSEable City Lab unveiled the Copenhagen Wheel. Its large red hub stores the energy derived from braking. That energy is used for future pedaling, up a hill for example, like a hybrid car. Using sensors and a Bluetooth connection to the user’s iPhone, the wheel monitors speed, direction, and distance and collects data on air pollution. The phone can lock the bike, change gears, and select how much the motor assists you. Production could begin next year, another step toward increasing bicycle use in cities.

Donald Douglas and James McDonnell, both MIT alums, cofounded McDonnell Douglas (which merged with in 1997), one of the world’s biggest aerospace manufacturers.

In 1919, eight years before Charles Lindbergh made his famous solo trans-Atlantic flight on the Spirit of St. Louis, it was the less dramatically named aircraft NC-4 that actually made history as the first airplane to fly across the Atlantic. Named the “Flying Boat,” it was designed by MIT professor Jerome Hunsaker, who proved that airplanes could fly long distances through all kinds of weather (the trip took 19 days). Within a decade, passenger planes were regularly making long journeys, and the world got a whole lot smaller.

In Greek mythology, Daedalus was a wily inventor who made wings out of feathers and wax to escape his prison on the island of Crete. A team of MIT grads and professors gave a nod to the old guy with their flying craft Daedalus 88, which made a 72-mile flight from Crete to the island of Santorini – the distance Daedalus supposedly flew – powered completely by the energy of a Greek Olympic cyclist. The flight is still the world record for human-powered aircraft and makes us wonder how far we can pedal?

The leaders of , William Clay Ford Jr., chairman, and Alan Mulally, president and CEO, both graduated from MIT’s Sloan School of Management.

Tom and Ray Magliozzi, MIT classes of ‘58 and ‘72 respectively, have been helping car owners to their own Eureka moments for 35 years. Better known as “Click and Clack, the Tappet Brothers,” the staples on NPR’s automotive advice show “Car Talk” educate, amuse, and needle car owners and casual Sunday morning listeners with near total recall of the most obscure facts about a 1987 Taurus. Somewhere along the way, they have helped change how we think of what we drive and why we drive it.

Equal parts Smart Car, Zipcar, and bike sharing – the CityCar, in production at MIT’s Media Lab, rests on an innovative design that moves the drivetrain from the center of the car to create individual motors on each wheel. The two-seat electric car can turn with a zero radius and fold in half for tight parking spaces. Inventor Ryan Chin sees CityCar as “mobility on demand,” allowing commuters to swipe a card, drive away, and leave it at another station (with no reservation). Chin hopes to unveil it in Spain by late 2013. 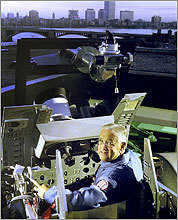