A business class on what it takes to be a player 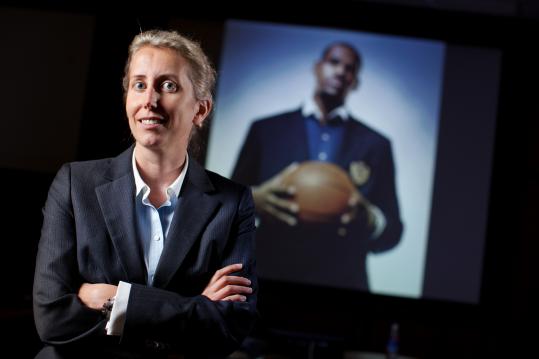 Not far from the TD Garden, in a dimly lit, windowless room, LeBron James faces intense scrutiny. As an image of the NBA All-Star stares down from a projection screen, questions fly. Why did he make this decision, that decision, The Decision to move to South Beach? What is next?

This is not a video session for locked-out NBA players, not a gathering of great basketball minds. It is Harvard Business School’s wildly popular “Strategic Marketing in Creative Industries’’ course.

For 80 minutes, students discuss James and his brand, and debate his best marketing opportunities. By making James a case study, the course provides a compelling lesson in what can determine success or failure in the volatile world of celebrity marketing.

“When Harvard Business School approached us for a case study, it was a ‘wow’ moment,’’ said Maverick Carter, a childhood friend and business partner of James.

James and his business partners happily cooperated with the research process, giving access and candid assessments of marketing choices, making the case study something of a page-turner.

The Miami Heat forward is but one study subject. Others include Lady Gaga, Real Madrid, Maria Sharapova, the NFL, Tom Cruise, and Radiohead. The course gives students virtual backstage passes to Hollywood, to the highest levels of European soccer, to arena concert tours, to all the important places where the cult of celebrity reigns and represents potential revenue.

“I’m trying to uncover the common concepts across different creative industries, synthesize the knowledge that exists for one area, and see how it applies to others,’’ said professor Anita Elberse, a student favorite. “You can look at Lady Gaga and LeBron James and explore what concepts hold true for both; it’s really not about what decision the protagonists in the cases ultimately made. Very often there is no right or wrong decision. It’s much more about the underlying phenomena.’’

The James case study focuses on three video game endorsement offers he received in late 2008. But the decision between Electronic Arts (EA), 2K Games, and Microsoft Xbox Live is really an avenue for exploring compensation models and the career life cycle of professional athletes. The Lady Gaga case concerns her future plans after issues arise with a planned concert tour in the fall of 2009. The Maria Sharapova case discusses how her agency, International Management Group, will market the tennis champion following her Wimbledon win at 17.

“What intrigues me about the class is it’s trying to take this black box of what is a creative industry - sports, movies, television, music - and make sense of it from a more rational business perspective,’’ said student Chris Satti.

Delving into the James case study, students voice opinions about brand-building through video games. Student Rebecca Menges throws out the tagline “Bron meets Brains,’’ eliciting applause and laughter. Elberse suggests she write the tagline on the chalkboard, where graphs and lists break down the video game decision.

A bell curve illustrates the “career life cycle’’ of professional athletes - including when to “play it safe’’ or choose “more risky deals.’’ Superstar athletes find themselves in better position to negotiate riskier, potentially more rewarding deals, perhaps with revenue sharing, like the one Xbox Live presented James.

“LeBron understood the value he had at the time, in addition to his value potential,’’ said student Kwame Owusu-Kesse. “That understanding led him to make a lot of risky decisions that were admirable in terms of breaking tradition.’’

Most students prefer the Xbox deal for James, not only because of the revenue sharing, but also because it gives the two-time MVP more creative control.

Hearing that, Elberse, 38, jokes about the merits of Shaquille O’Neal’s widely panned Shaq Fu game. She is funny, self-deprecating, and passionate during case discussions, allowing the interests of the class to steer conversation. Students describe Elberse as a “rock star’’ among Harvard Business School faculty.

She was a high-level soccer player in her native Netherlands before devoting herself to academics, with a focus on media and entertainment industry. “I’m an avid fan of movies, music, television, sports, video games,’’ Elberse said. “Media and entertainment has a huge impact on society in an economic, cultural, and even political sense. It’s the number one export product for the US. It creates an enormous amount of jobs in this country and around the world. But it also drives how we think and what kind of issues we think about.’’

With James - whose sports marketing company LRMR emphasizes greater control by the athlete and a more entrepreneurial spirit - Elberse saw a potential counterpoint to the Sharapova case. The tennis star and her agency represent the more traditional model for top athletes and securing endorsements.

Elberse traveled to Cleveland to ask Carter, James’s business partner, and other company employees about the challenges they faced. She was granted enviable access, including e-mail exchanges.

James was “amazed’’ at the final product, “amazed that it happened and amazed to be doing it,’’ Carter said, adding that contributing to the case study made him “understand, even more, how much collaboration with the right people is valuable.’’

“These are people I can learn from, letting them understand my thinking, then hearing their opinions about it,’’ said Carter of the case study experience, which includes participating in class discussion of the James case. “I learn something every time I go to the class. It’s so much fun it makes me want to go back to college.’’

Like James, Lady Gaga’s advisers were eager to participate. Her case considers the pop star’s options after hip hop artist Kanye West pulls out of the arena concert tour they planned to coheadline. For Elberse and a pair of students, research culminated with an actual backstage pass to Lady Gaga’s concert at TD Garden last March.

The case presents three options: Lady Gaga could continue with a solo arena tour at great financial investment and risk, create a smaller-venue tour with no real chance of profitability, or cancel any tour plans. Debating the three choices, students talk about managing products and managing talent. They also consider how bigger risks come with disproportionately bigger rewards.

“That they were considering smaller theaters leads to the trade-off between trying to build brands and capitalize on brands,’’ Elberse said. “You don’t want to focus on milking that brand too soon.’’

The Xbox Live deal, the one ultimately chosen by James, involved more risk because it would take more resources and more time to develop a new game. It provided potentially more reward because of revenue sharing. As of today, James and his company continue to work on creating a game.

“It’s . . . about being smart in how you engage fans who grow to adore you,’’ said Menges, the tagline-savvy student. “For those of us thinking about consumer packaged goods, it’s good to broaden our mindset about marketing. A person can be a product, a brand, or an icon, too.’’