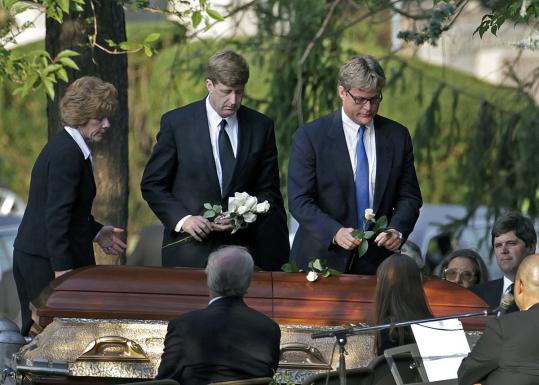 WASHINGTON - In a spirited memorial service filled with laughter and tears, Kara Anne Kennedy, the daughter of the late Senator Edward M. Kennedy, was remembered yesterday as a loving mother, a devoted friend, and an adventurous woman “made in her father’s image.’’

“She was filled with strong emotions and empathy for others,’’ said her brother, Edward M. Kennedy Jr., during a funeral Mass at Holy Trinity Catholic Church here. “She was passionate and compassionate.’’

More than 650 mourners packed the church, including Vice President Joseph Biden, US Senators John Kerry and Scott Brown, and members of the Kennedy family, including Caroline Kennedy and Maria Shriver.

Later, family members reassembled at Holyhood Cemetery in Brookline for Kara Kennedy’s burial. The group arrived in a motorcade from Logan International Airport under State Police escort, and reporters were kept at a distance.

Family members placed white flowers on top of her casket after a prayer from the Rev. Donald MacMillan of Boston College. Renditions of “Moon River’’ and “My Sweet Lord’’ were sung by David Coleman, a choir director at Tufts University.

The Kennedy family patriarch, Joseph P. Kennedy Sr., a former ambassador to Britain’s Court of St. James’s, purchased the Brookline plot in 1958, according to a family statement. Yesterday, Kennedy was buried alongside her grandparents, Joseph and Rose Kennedy; her aunt, Rosemary Kennedy; and her cousins, David and Michael Kennedy, the statement said.

A family spokesman said about 30 family members and friends attended the burial.

Kara Kennedy, 51, the only daughter of the senator and his former wife, Joan, died of an apparent heart attack Friday after working out at a local health club.

She was diagnosed with lung cancer in 2002 and was given only one year to live.

Besides her mother, Kennedy leaves a 14-year-old son, Max; a 17-year-old daughter, Grace; as well as her brothers, Edward Jr. and Patrick J. Kennedy, a former Rhode Island congressman.

In remarks at the Mass here, Patrick Kennedy took solace in the memories of his sister and their father sailing together off the waters of their Cape Cod house.

“Dad now has his first mate, his crew with him, as they set sail,’’ Kennedy said.