Digital textbooks are a no-brainer for many, and sales are up this year

For college students heading to campus, hitting the books may no longer require sturdy backpacks and strong arms.

Campus bookstores have increased the number of digital textbooks this school year, as students weaned on Facebook and iPads seek virtual alternatives to heavy tomes. Digital textbooks are projected to account for 10 to 15 percent of course materials sold by the fall of 2012, compared with just 3 percent of the $5.85 billion sold last year, according to the National Association of College Stores.

“There’s been a boom in digital titles this year,’’ said Miguel Suarez, general manager at the MIT Coop, the campus bookstore for the Massachusetts Institute of Technology in Cambridge. This year, 25 percent of the textbooks for sale at the store are available digitally, compared with less than 10 percent last year, said Suarez.

Price is the biggest factor for students, and publishers are hoping digital discounts, in some cases up to 60 percent less than traditional texts, will make them converts. For example, at the MIT Coop, the “Technology Ventures’’ business textbook costs $151.40 for a new copy, $113.55 for a used copy, and $83.90 for the e-book. Students can save even more by renting the e-book, which costs $65.60 and expires in 180 days.

“If a student drops a laptop in the bathtub, they don’t lose their textbooks,’’ said Jade Roth, vice president of books and digital strategy at Barnes & Noble. “It could be a great help for students who need rolling bags to carry all their books.’’

Nowadays most college bookstores offer a digital textbook as an option right on the bookshelf next to the hardback. Students pick up a card, which resembles a gift card, and redeem it at the register. They receive an activation code on their purchase receipt, which can be used to download the book through free software platforms such as Nook Study, VitalSource Bookshelf, or CourseSmart.

Although college textbooks have been available digitally starting about a decade ago, business started picking up within the last year as e-reader technology improved and prices dropped. Roth predicts a “pretty dramatic increase’’ in e-textbook sales this school year, but noted that the industry still has far to go with only 25 percent of what college students are looking for available in digital form.

“Ultimately the student will be the decider,’’ said Stephen Turco, general manager of Barnes & Noble at Boston University, where sales of digital course material increased more than 100 percent over the past two academic years. “From a business standpoint, we want to meet the needs of customers.’’

James McConnaughy, an incoming senior at Boston University, bought an iPad with e-textbooks in mind as he heads back to school next week. “It absolutely seems a lot more convenient to store books in one place,’’ said the 21-year-old Norwood native.

He thinks digital rentals will be a hit on campus because “a lot of my classmates are not interested in subjects after the class is over. Being able to rent an e-book is a huge deal.’’

For some students, like Harvard Extension School’s Kasey Choi, digital books aren’t much of a deal when the resale value of printed books is factored in. Publishers have to “come down significantly on price’’ in order to make him switch, he said. For example, Choi said he recently bought a new chemistry book on for $50 because “if I resell it, I can get $30 back.’’

Still publishers are adding thousands of digital textbook titles this year and see it as a significant area for growth as consumer behavior changes.

While digital textbooks are “a small percentage of total sales, students who own a tablet are more likely to adapt,’’ said Susan Aspey, a spokeswoman for , which has its US education unit based in Boston.

Along with the rise of e-textbooks come new ideas to modernize the textbook industry.

“Instead of a static text, we are offering a learning platform that can be added to and enhanced,’’ said Eric Frank, who worked for Pearson before he formed the start-up with former co-worker and McGraw Hill editor Jeff Shelstad.

The Web-based books are free; for $25 to $40, students can download e-reader versions, audio books, and print chapters on demand, said Frank. By mid-September 300,000 college students across the country will have used a Flat World Knowledge text.

“We are going right at the McGraw Hills of the industry, building a new publishing company and selling directly to professors,’’ said Frank.

An early evangelist is Gerard Shaw at Dean College in Franklin.

“The books I used to use were $160,’’ said the associate business professor who introduced Flat World Knowledge texts into his classroom three years ago.

Shaw is working on adding his own chapter to a book for his foundations of business course this year. “All my courses are paperless. Students access the book by laptops or iPads,’’ he said. “Ultimately this is a generation that uses digital. These students have grown up with this. It’s a very cool model.’’ 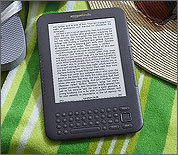 A rundown of e-readers out now 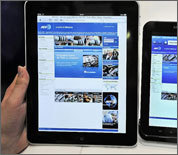 Guide to the latest tablet computers