Academics targeted for men of color 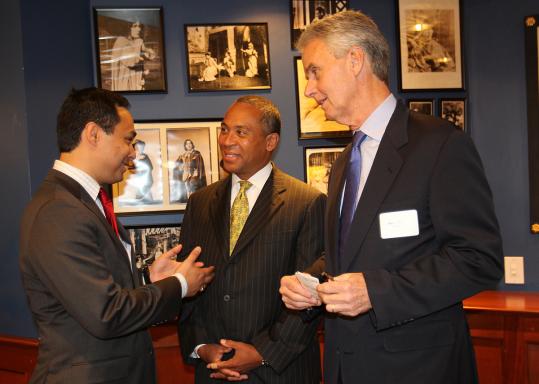 The College Board unveiled an initiative at a forum at Harvard University yesterday to improve the academic achievement of young men of color, saying that bolstering their educational success should be a national priority.

In making the announcement at the W.E.B. Du Bois Institute for African and African American Research, the board urged more mentoring of young men of color, better training of teachers on cultural sensitivity, and greater academic support and other services for them in college.

Those recommendations follow the release of two reports by the board yesterday that showed young men of color lagging behind their white male counterparts, as well as female students of their own race or ethnicity.

One report explored rates of college-degree attainment, unemployment, and incarceration, among other barometers of academic, emotional, and social well-being. The other report chronicled the struggles that young men of color confront in getting through college.

One of the more disturbing findings focused on 12th-grade reading levels on the 2009 National Assessment of Educational Progress exams. In reading, 51 percent of African-American males and 45 percent of Hispanic males scored below basic.

Boosting the achievement of young men of color is “critical to the economic welfare of the country,’’ said John Lee, who authored the statistical analysis report and is policy director for the College Board’s Advocacy and Policy Center.

“If we have to compete in a global sense, we can’t do that if only women are driving the educational future of America,’’ Lee said in an interview.

Similar studies in Massachusetts have revealed that males tend to achieve at lower rates than females within their own racial or ethnic groups.

The Center for Labor Market Studies at Northeastern University, for instance, found in recent reports that male graduates of Boston public schools were less likely to earn college degrees than females of their own race and ethnicity.

Boston public schools have ratcheted up efforts to reduce the achievement gap between the genders.

About four years ago the district created the “10 Boys’’ clubs, a program that offers additional tutoring, mentoring, and emotional and social support to about 600 boys in grades 4 through 12 in approximately 50 schools.

That program proved so popular that the school district launched a similar program, Impact 300, to target boys in kindergarten through Grade 4. Recently, the 300 students visited Harvard, in an effort to start breeding a college-going mentality at a young age.

Carroll Blake, the school district’s executive director of the achievement gap office, said he hoped the College Board’s initiative would accelerate and expand similar endeavors across the country.

“It will give some validation to work that is currently happening,’’ Blake said in an interview. “We are losing so many of our boys. In some cases, we are losing them to the street. In other cases, they are being killed.’’

Governor Deval Patrick, who addressed many of the forum participants during a lunch prior to the meeting, said Massachusetts still has much work to accomplish in shrinking the achievement gap between students, according to a copy of his remarks.

“While overall our students lead the nation, we still have a persistent achievement gap, and stuck in that gap are poor kids, and kids with special needs, or those who speak English as a second language,’’ Patrick said. “More often than not, these are children and young people of color,’’ Patrick said.