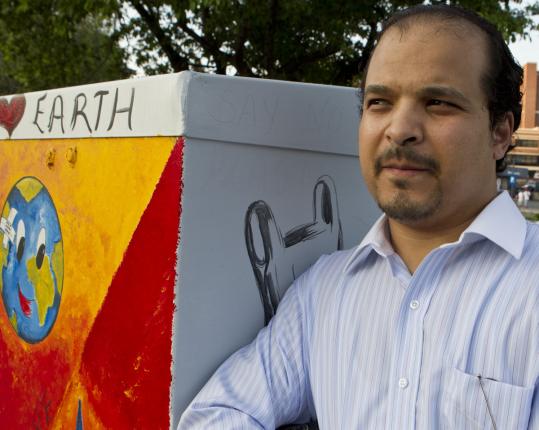 “We cannot go back to Libya due to our circumstances in the war,” said Harem Gelani, 33. He was planning to study dentistry at Boston University beginning in July. (Matthew J. Lee/ Globe Staff)
By Emily Sweeney Globe Staff / May 30, 2011

Hatem Gelani was getting ready to study dentistry at Boston University on a full scholarship this summer, but now those plans are in limbo because he can’t tap his scholarship money.

Like thousands of other Libyans across North America, the 33-year-old graduate student who lives in Malden is unable to access his academic funding because the assets of his war-torn country are frozen and his Libyan-sponsored scholarship is in jeopardy.

When Gelani spoke with an admissions officer at BU, he was told he could defer until 2012, but he feels an urgent need to enroll now. “We cannot go back to Libya due to our circumstances in the war,’’ he said.

Gelani’s program begins at BU in just weeks, on July 1. “There is no time,’’ he said.

He had planned to attend a three- or five-year program at Boston University’s Henry M. Goldman School of Dental Medicine on a full scholarship through the Libyan North-American Scholarship Program, which finances education for Libyan students at host universities in Canada and the United States. It was supposed to pay for his tuition and provide an $1,800 monthly allowance for rent, health insurance, and other living expenses.

The scholarship program is funded by the Libyan government and administered by the Canadian Bureau for International Education, an organization of more than 200 colleges, universities, school boards, educational organizations, and businesses.

Currently, more than 2,000 Libyan students are pursuing graduate and postgraduate studies in North America through the scholarship program, at institutions such as Clemson University and Washington State University. Gelani estimates that more than 100 Libyan graduate students in the Boston area are in the same predicament.

Colin Riley, spokesman for Boston University, said he knows of a handful of Libyan students in the graduate dental program who are waiting to see whether their scholarships will be funded.

“It’s a difficult situation for them,’’ said Riley. “My hope is that it’s resolved and they’re able to continue their education.’’

Ashraf Naser relocated from Tripoli to study this summer at Boston University’s School of Dental Medicine, where he plans to pursue a master’s degree in prosthodontics.

The 29-year-old has been living in Malden for the past eight months.

Naser was getting a monthly $1,600 allowance and received his last payment at the end of April. Since then, he has been “not spending too much’’ and just trying to get by.

Naser is anxious about the possibility of having to defer a year. “Each year you’re losing, you’re losing out on your life,’’ he said.

Naser said correspondence from the Canadian Bureau for International Education has been vaguely promising.

Calls to the bureau were not returned yesterday, but it has been posting updates on its website.

“During this difficult time we continue our commitment to the Program and to the 2,500 students studying throughout North America,’’ the site says.

The most recent update, on Friday, said officials at the bureau “anticipate that formal permits [from the United Nations Security Council] will be issued in the next few days’’ that will allow Libyan authorities to request bank transfers from a frozen offshore account so the scholarship program can continue.

But until that happens, the academic future of Libyan graduate students across the country remains up in the air.

Like other Libyan grad students, Gelani and Naser are cautiously optimistic as they await word about the future of their scholarships.