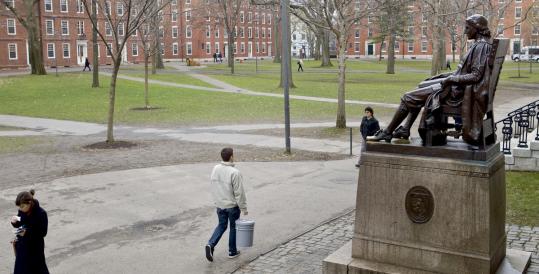 Harvard accepted a record-low 6.2 percent of applicants this year. The college says it markets itself aggressively to high school students because it wants to find the most talented class. (Michael Fein/Bloomberg News)
By Janet Lorin Bloomberg News / May 22, 2011

NEW YORK — Nicole Ederer was delighted when Columbia University and Duke University wooed her with e-mail and letters after she scored 214 out of 240 on the preliminary college entrance exam she took in her junior year.

The 18-year-old high school senior in Thornwood, N.Y., said she spent about $780 on 12 applications after mailings from top schools such as Duke, which sent a wall poster. She was rejected by Duke, Columbia, and Cornell, and plans to attend the University of Maryland.

“I thought, ‘Oh my gosh, someone is interested in me,’ ’’ Ederer said. “They attract you with an e-mail and a few pamphlets and big envelopes filled with a ton of information and make you want to go to that school, and they don’t accept you.’’

Critics say the deluge of correspondence from even the most selective colleges is raising false expectations among thousands of students, bringing in application fees as high as $90 apiece, and making colleges seem more selective by soliciting many more applicants than they can accept.

College applications are soaring even as the number of high school graduates fell 2.2 percent this year from a peak in 2007-2008, according to the US Department of Education.

“The overwhelming majority of students receiving these mailings will not be admitted in the end, and Harvard knows this well,’’ said Reider, a former admissions officer at Stanford University.

Harvard, which accepted a record-low 6.2 percent of applicants this year, markets to students because it wants to find the most talented class, said William Fitzsimmons, dean of admissions and financial aid. The school informs students “it’s a highly competitive process,’’ he said.

“There are so many students out there in the world who might not automatically think about Harvard as a place to go,’’ said Fitzsimmons, who declined to say how many students the university contacts. Harvard received almost 35,000 applications this year, a record.

“The odds of reaching the top of anything are not good, but is that a reason not to try?’’ said Fitzsimmons.

Yale University and MIT are scaling back their marketing, saying they do not want to encourage students who probably will not be accepted. Yale, which admitted 7.4 percent of applicants this year, cut its mailings by a third since 2005, to 80,000, said Jeffrey Brenzel, dean of undergraduate admissions.

“If a student has only the most remote chance in admission, I feel it’s inappropriate to try to persuade a student to send an application,’’ Brenzel said.

Consumer groups said the nonprofit College Board, which owns the SAT college admission test, and its nonprofit rival, ACT Inc., are making money by selling personal details about teenagers. The companies collect information on millions of test-takers and sell students’ names and information to colleges at 33 cents apiece.

Colleges reap both prestige and money from the soaring stacks of applications.

“Total application count is taken as some kind of proxy for school popularity,’’ Yale’s Brenzel said.

Harvard charges $75 to apply, which would amount to $2.6 million in revenue, minus waivers for low-income applicants. Harvard declined to say how much revenue was generated, though Fitzsimmons said the school does not make a profit.

Stanford charges $90, the highest fee for US students among more than 400 colleges that use the Common Application. This year it received about $2.6 million in fees, after giving 17 percent of applicants waivers. The money pays for the readers, software, and technical support needed to process the applications, said Bob Patterson, director of admissions of Stanford.

Duke, which accepted 13 percent of a record 29,689 applicants this year, sent multiple mailings to Ederer. The college contacts about 50,000 prospective applicants annually through electronic and paper mailings, based on their PSAT scores, said Christoph Guttentag, the school’s dean of admissions.

Duke does not know everything about a student until it receives an application, which includes official grades, recommendations, and high school activities, he said.

“We don’t want to lead a student on,’’ Guttentag said. “Nobody does it perfectly. It’s not unlike being contacted by a search firm and being asked to apply for a job that you don’t get.’’