Smoothing the path to higher education 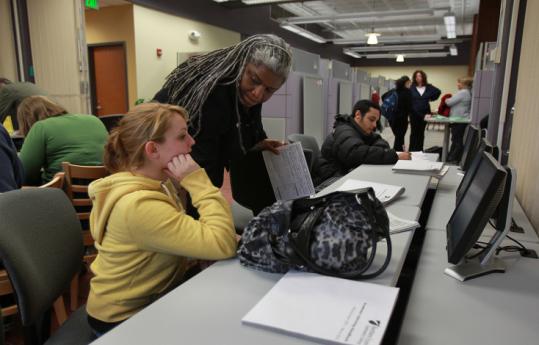 When Reanne Malesky was a senior at Pentucket Regional High School in West Newbury in 2008, she had her sights set on the University of Connecticut.

But, she said, she didn’t want to take out student loans — and incur debt — to cover the out-of-state tuition.

She decided to begin her college education at nearby Northern Essex Community College in Haverhill. “They had a transfer program, so I could go two years and then transfer,’’ Malesky said. “It was such a great deal and saved so much money, I couldn’t say no to it.’’

After graduating from Northern Essex last spring, she transferred to the University of Massachusetts Amherst, where — thanks to her 3.62 grade-point average — she was guaranteed admission and free tuition.

Those perks for transfer students have long been in place. But now, UMass Amherst is providing even more incentives. In the fall, community-college students transferring with a mini mum 2.5 grade-point average will be given priority when registering for courses and for housing, scholarships to cover student fees, and special advising services.

UMass is also spreading the word about the guaranteed admission to community college for students with at least a 2.5 GPA, and waived tuition for those with at least a 3.0.

“They are trying to open everyone’s minds to the fact UMass Amherst is here and student-friendly,’’ said Grace Young, a dean who advises transfer students at Northern Essex, which also has a campus in Lawrence. “And it’s true. We have had students go there and it’s been quite successful.’’

“Anything that will provide opportunities for our students, we are supportive of,’’ said Carole Cowan, president of Middlesex Community College, which has campuses in Lowell and Bedford. “We should provide those pathways.’’

The incentives are part of an effort to increase the number of four-year college graduates in the state, as well as the graduation rate of UMass Amherst, where only half of undergraduates earn a degree in four years.

“Studies show that community college transfers do as well, if not better, than students who go in as freshmen,’’ said Cowan. “They have a track record. They have learned how to study and are serious.’’

And, she said, she likes UMass Amherst’s new offering of residential academic programs that allow transfer students who live on the same dorm floor to take a course together.

“Research shows students who have the opportunity to work in cohort do better,’’ said Cowan. “Any opportunity to bring students with common goals and aspirations together is helpful for them.’’

Wayne Burton, president of North Shore Community College in Lynn and Danvers, said, “I strongly believe this is a great thing for our students.’’

And, he said, it reflects well on community colleges. “It means to me UMass and other institutions recognize the excellence of our students. We are a hidden gem.’’

One of UMass Amherst’s goals is to increase student diversity, and local community colleges draw from significant minority populations.

“Seventy to 80 percent of the students I talk with are employed while going to college,’’ he said. “Those folks can go to a UMass Boston or Lowell campus and keep their job going at the same time. If they are going to Amherst, it’s a bigger lifestyle change.’’

He and Young agreed that it’s younger community college students who are most interested in moving to the western part of the state.

When Malesky transferred to UMass in the fall, she didn’t have college housing. “I had to live off-campus, so it’s not the same opportunity to meet people,’’ she said.

And, she said, she was “at the bottom of the barrel when it came to registering for classes.’’

Under the new incentives, community college grads will be able to enroll in classes before other transfer students, will have their financial aid packages considered first, and 50 housing slots will be reserved for them.

To all of that, Malesky said, “I wish this happened last year.’’