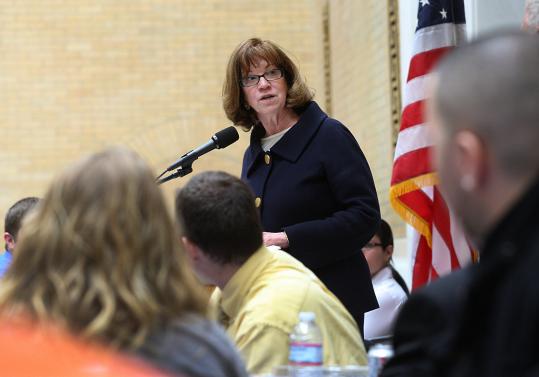 Senate President Therese Murray made a speech at the State House in Boston during a visit by state university students. (Suzanne Kreiter/ Globe Staff)
By Akilah Johnson Globe Staff / April 26, 2011

Using their personal struggles to help underscore their point, students urged lawmakers to inject about $11 million into the system’s coffers.

The nine schools in the system are trying to cope with a budget hole created by the loss of $16.3 million in federal stimulus money by proposing an average $480 fee increase next year. Without the additional funds, student fees could jump by an additional $200, bringing next year’s total increase to nearly $700.

“That could be the difference between going and not going,’’ said Danielle Farmer, a senior at Framingham State University majoring in history who is from Billerica. It is important “for students like myself to put a face with the cause.’’

Farmer, the youngest of eight children, said her retired single father could not help her pay for college, and she picked Framingham State, in part, because she could manage the cost. To cover the school’s $15,665 price tag for in-state students (that does not include books), Farmer said she works two jobs during the summer, as well as three jobs on campus and a “weekend job’’ during the school year. Still, she said, she will graduate with about $27,000 in student loan debt.

“There are a lot of people in the same boat,’’ said Farmer, a student trustee at the school.

Angel Donahue Rodriguez, who was born in the Dominican Republic but has lived in Salem since he was 6, said he enrolled at Salem State University because it is affordable and he could keep expenses low by living at home.

“If I lived on campus, I still wouldn’t be able to afford it,’’ said Rodriguez, a junior who works 25 hours a week and is the oldest of four. “For my family, it would have been a struggle.’’

Rodriguez, Farmer, and the other student leaders made their case for more funding in individual legislative offices. Later, some legislators — including Senate President Therese Murray — and Lieutenant Governor Timothy Murray championed the system during a luncheon held in the Great Hall, though they did not directly address the funding question.

The state university system is Massachusetts’ most affordable path toward a four-year degree, according to education officials. Tuition and fees average less than $8,000 a year, and the system’s 51,000 students borrow about 25 percent less than the average college graduate, officials said.

But university presidents said they are struggling to continue with the system’s core mission of providing a high-quality, low-cost education. State aid has decreased about 12 percent in the past decade, forcing schools to pass along costs to students by increasing fees, presidents said.

“It really puts a lot of pressure on parents and students,’’ said Robert Antonucci, president of Fitchburg State, which increased student fees this academic year by $950. In an interview at the State House, Antonucci said in the past five years the cost to attend his school has jumped from about $13,000 a year to about $17,000. “We’re being asked to pay for a lot of costs that traditionally have been paid for by the state,’’ he said.

One example is a 3.5 percent raise for next year that the state negotiated with system faculty, administration, and custodial unions.

But the proposed budget does not include the $7 million needed to fund the raises, according to the system’s council of presidents. If the universities are forced to pay for the raises, it will be students who pay through fee increases.

For students struggling to pay for college, the additional fees could mean additional debt, financial sacrifices for their families, or the inability to return to class.

“Sometimes we have unintended consequences that flow from policies . . . and the only way to figure that out is talking to end consumer and you are that end consumer,’’ Secretary of Education Paul Reville told the students. “Don’t underestimate the power of your voice.’’