As MIT rises, so does its city 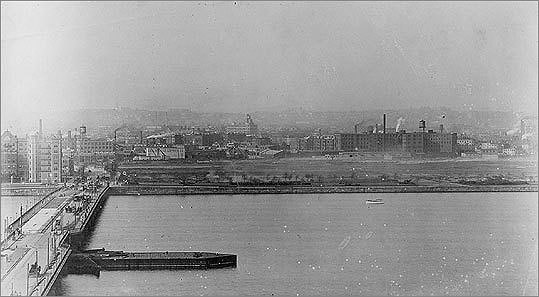 (Courtesy of the MIT Museum) The future site of the MIT campus is shown as it appeared in 1890, before the college moved to Cambridge.
By Tracy Jan Globe Staff / April 4, 2011

CAMBRIDGE — Over the past 150 years, MIT has produced dozens of Nobel laureates, and even designed the computer that guided the Apollo to the moon, accomplishments befitting one of the world’s top science and engineering schools.

But it has also had a tangible impact closer to home: transforming a swath of this city’s industrial riverfront with its ever-expanding campus.

Over the last decade, MIT’s academic footprint has increased by more than 2.7 million square feet, its largest building boom since the federally funded postwar expansion of the 1960s. Now, as the Massachusetts Institute of Technology celebrates its sesquicentennial this month, it is beginning to turn its attention toward renovating facilities and developing neighboring commercial holdings.

The recent growth, which MIT pursued even through the recession, has injected millions of dollars into the city, augmented the university’s involvement in the life sciences, and remade once-gritty neighborhoods into one of the prime biotechnology and research centers in the country.

MIT was created by the state Legislature as one of the first land-grant institutions in the nation. Originally located within the confines of Boston’s Back Bay, the institute — facing repeated threats of a Harvard merger — secured its survival in 1916 when it moved to an imposing complex of white neoclassical buildings on the mud flats along Cambridge’s shores.

Since its arrival here, the MIT campus has more than tripled in size to 160 acres, and the university owns an additional 94 acres of commercial property that it’s continuing to develop.

The investment property, which MIT leases or develops to generate income for its $8.3 billion endowment, has made the university the largest taxpayer in Cambridge. MIT pays nearly $33 million in taxes a year, more than six times that of neighboring Harvard. MIT’s contribution represents more than 12 percent of the city’s tax revenue stream.

And in contrast to Harvard’s stalled expansion across the river into Boston’s Allston neighborhood during the recent economic downturn, MIT has managed to complete its building projects through heavy fund-raising and increased borrowing.

While some of its commercial developments have been marked by controversy, city officials and residents, including occasional critics of the university, credit MIT with helping to make Cambridge the vibrant city it has become.

“MIT’s development, while it hasn’t been perfect, has had a very important impact on the city and its ability to provide needed resources for the community,’’ said Frank Duehay, who served three times as mayor of Cambridge in the 1980s and ’90s. “There are hundreds of cities across the country that would love to have an MIT located right in the middle of it.’’

That was the vision in 1911 when then-Mayor William Brooks wrote Richard Maclaurin, MIT president, inviting the university to “cross the river and make Cambridge its permanent home.’’

“Such an institution is to my mind a blessing and not a burden upon the community,’’ Brooks had written, prompting the university five years later to ferry its faculty ceremoniously across the Charles.

Even City Councilor Kenneth Reeves, who last fall criticized the university for what he viewed as its clandestine development plans and the proliferation of empty storefronts in MIT-owned property, recognizes the university’s impact.

“All MIT expansion is good, because MIT is the magnet for the bulk of the biotech involvement in the city,’’ said Reeves, a two-time mayor. “MIT is sort of the dream institution in terms of its contribution to the healthiness of this economy.’’

Notable recent projects include the bold, whimsical Frank Gehry-designed Stata Center for computer, information, and intelligence sciences that opened in 2004. A year later, the university opened the largest neuroscience center in the world, followed by a physics center and the 2009 expansion of its Media Lab — all helping to transform the grim campus once dubbed “the factory on the Charles.’’

Campus construction reached a peak this school year, with a new wing for the Sloan School of Management and a seven-story cancer research center bringing together oncologists, engineers, and biologists. The university is planning two new buildings to house its materials research, as well as energy and environmental research initiatives.

“What all these big buildings symbolize right now in Kendall Square is the start of the life sciences century,’’ said Deborah Douglas, curator of science and technology at the MIT museum. “The world shapes MIT as much as we contribute to the shaping of the larger world through various inventions and educational achievements. The growth of these buildings reflects that.’’

In addition to its academic expansion, MIT has spurred the growth of industry, spawning hundreds of companies around the perimeters of campus and attracting others to relocate to Cambridge on university-owned land. The institute announced in October that it will lease more property to , the Swiss-based pharmaceutical company that moved its research headquarters onto what had been MIT property in 2001.

MIT is also renovating half of the historic assembly plant on Memorial Drive — where the Model T was manufactured and test-driven — for the oncology headquarters of French pharmaceutical firm .

Even Lawrence Summers, former Harvard president, praised MIT for its history of fostering businesses in its backyard, where faculty and graduate students often shuttle between laboratories on campus and companies sprung from university research. The Cambridge Innovation Center, housed in an MIT-owned building in Kendall Square, provides start-up companies with office space.

“I’ve also always thought that MIT is a very positive example of a university that does a good job of supporting and encouraging entrepreneurship by its students and its faculty,’’ Summers, an MIT alumnus, said in a recent address to the Greater Boston Chamber of Commerce. “And that there’s room for other universities to learn from their more business friendly approach.’’

Residents in East Cambridge and other neighborhoods surrounding MIT are eager for the university to continue to play a role in reviving some of the most blighted areas of town.

In the past decade, the university has converted old warehouses on the west side of campus into laboratories. It has developed University Park, a 27-acre complex for research, housing, and retail, on the site of a shuttered wire and cable company. And it’s fixing up the edges of Central Square, where dilapidated pockets have been nicknamed “Central Scare’’ for the cast of drunks, drug addicts, and panhandlers.

While some have criticized MIT for not doing enough to bring vitality to several blocks of property it owns on Massachusetts Avenue, university officials say it’s in the process of leasing out its last vacant retail spaces.

The neighboring Kendall Square, a former wasteland bordering the eastern end of campus, has the highest number of biotech and information technology firms per square mile in the country, a far cry from the days when Minka vanBeuzekom lived in a high-rise MIT dorm with her husband.

“There was nothing here in 1980,’’ said vanBeuzekom, a member of the Area Four Neighborhood Coalition who has lived near the campus for 30 years. “The only thing to do was to look down at Kendall Square and watch the cars go around the rotary.’’

But many residents, and some MIT officials, say the infusion of new companies to the area is not enough. The area is still lacking in amenities and atmosphere.

Residents say they want a livelier streetscape that draws visitors in the evenings. The university is drawing up plans to transform Kendall Square from what is now largely an office park to a vibrant neighborhood. It hopes to create a plaza around the T station with a mix of shops and restaurants where street activity currently screeches to a halt once the surrounding office buildings empty out.

“We want to be out at night and not just go home,’’ said Barbara Broussard, president of the East Cambridge Planning Team, who has lived in the neighborhood for 15 years. “Many of us have a lot of hope about Kendall Square and what it will become.’’

MIT through the years