Young adults donate time, embrace the chance to give back 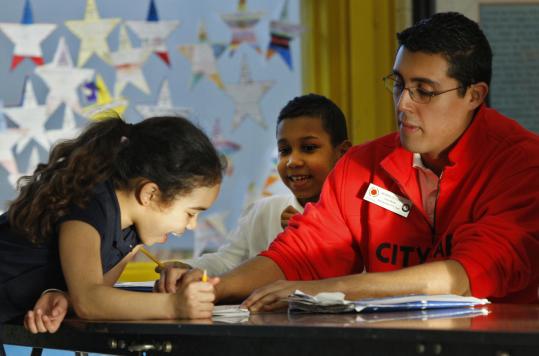 Harvard sophomore Julie Zauzmer turned 20 on Jan. 22, and her birthday couldn’t have been better: She got to work the overnight shift at the Harvard Square Homeless Shelter.

Zauzmer, an English major, spent the wee hours washing dishes and laundering bedding at the emergency shelter in the University Lutheran Church on Winthrop Street, which is run entirely by local college students. “It was a perfect way to celebrate my birthday,’’ she said.

That might seem an extraordinary act of selflessness for someone turning 20. But there’s increasing evidence that commitment to community service is becoming much more ordinary to today’s young adults.

Where their boomer parents may have been inclined to put their idealism and energy into protest and rebellion, today’s young men and women are civic-minded, less determined to change the social order, and more inclined to make the world a better place, even if it means doing it one load of laundry at a time.

“Young adults are doing more service and volunteerism than in any point in history,’’ said Scott Seider, an assistant professor of education at Boston University who studies the civic development of young adults.

Applications for community service opportunities are soaring, especially in Boston, where college students abound and the number of service opportunities in colleges is “head-spinning,’’ said John Gomperts, director of AmeriCorps, a national network of hundreds of service programs. It also helps that jobs are scarce. According to the National Association of Colleges and Employers, only 19.7 percent of the college class of 2009 and 24.4 percent of the class of 2010 had jobs waiting for them at graduation; in 2007, the rate was 50 percent.

At Harvard, the Winthrop Street homeless shelter is one of 86 service and social change programs associated with the Phillips Brooks House Association, which is a student-run nonprofit. Students can work with deaf children, tutor prison inmates, bring pets to nursing homes, and prepare Chinese students to become US citizens, among other opportunities.

Volunteerism thrives outside of colleges, too. Applications to AmeriCorps have skyrocketed, jumping from 91,399 in 2008 to 258,829 in 2010. Boston — one of the “hotbeds’’ of national service, according to Gomperts — is the head office for several AmeriCorps-funded national service organizations, including City Year, Jumpstart, Citizen Schools, and YouthBuild.

City Year, which puts young people in high-poverty schools as tutors and mentors to at-risk students, has had a 140 percent increase in applications since its 2007-2008 service year. Citizen Schools, which uses volunteers to work with students in struggling middle schools, had a 28 percent jump in applicants between 2008 and 2009; for its 2010-2011 program, there were 723 applicants for 170 slots, compared with 479 in 2008-2009.

There has been a 30 percent increase in applicants over the past two years at Jumpstart, an early education program serving preschool children. And 1,400 Massachusetts applicants were turned away last year from YouthBuild, which offers 350 low-income young people the chance to build affordable and green homes for low-income and homeless families.

“Most of my friends know it’s their duty to give back before they settle down,’’ said Samantha Wolf, a 23-year-old Boston University graduate serving with City Year in a Mattapan school.

City Year corps member Antonio Gutierrez, 22, graduated last year from Union College in Schenectady, N.Y., and is applying to law schools, but this year he is tutoring and mentoring students at the Blackstone Elementary School in the South End.

“I grew up in similar circumstances,’’ said Gutierrez, who said he was a weak student until enrichment programs changed his academic trajectory. Raised by a single mother in low-income housing across the street from City Year’s South End headquarters, he used to watch the red-jacketed corps members come and go, and decided to become one someday.

“I know how effective it is to have someone believe in you and tell you you can do this,’’ said Gutierrez, who speaks of the need for “moral incentives’’ and “economic incentives’’ for keeping students in school. “I’m honored and privileged to be able to serve the community where I grew up.

AmeriCorps’ Gomperts said he believes the surge in volunteering has to do with the attitudes of the past four presidents, from George H.W. Bush’s Points of Light to Barack Obama’s call for public service.

“I’m not someone who believes people sit around and wait for their president to call them to service, smack themselves in the head with the heel of their hand and say, ‘Damn, this is what I meant to do,’ ’’ Gompert said. “But I do think the constant drumbeat of presidents does lead to different expectations people have of themselves and others. It’s in the air and water now. It is what young people expect to do and want to do and what society expects of them.’’

Over the past few years, more and more schools have implemented service learning programs that integrate service with academics. A scarcity of jobs has freed up a lot of young people to serve their communities; an abundance of natural disasters from New Orleans to Haiti has given them opportunities.

“A substantial number of young people . . . went to New Orleans, did good things, and were alerted to problems,’’ said Peter Levine, who directs the Center for Information & Research on Civic Learning and Engagement at Tufts University.

Michael Brown, chief executive of City Year, says today’s young adults are a “deeply engaged’’ and idealistic generation, just not in the same way their parents were.

“I think young people from the boomer generation were focused on changing institutions, and today’s generation wants to work directly, in a hands-on way, changing people’s lives,’’ Brown said. “They don’t want be intermediated by institutions, much less take the time to change them. They want to have direct access to change in an immediate way . . . that changes a life directly.’’

There are echoes of this on a Saturday night at the Harvard Square Homeless Shelter, where students are serving meals provided by the university’s dining service.

“This is a way to have a real tangible impact,’’ said Zauzmer. She also records a weekly podcast called “52 Ways to Change the World!’’ “You can spend a night making dozens of grilled cheese sandwiches, but when you see someone eat it that night, it’s surprisingly uplifting.’’

The Harvard Square shelter provides shelter, food, and resource counseling for a minimum of 24 guests each night, as well as dinner plates for those who come to the door. The shelter also has a “street team’’ of students who go out each night to bring food and conversation to homeless people.

“I don’t see this as extracurricular. I see this as my responsibility,’’ said Luci Yang, 21, a senior studying economics who said she was inspired to work there after moving to Boston and passing homeless people panhandling in Harvard Square. “It was very jarring to know that people who were part of my community could also be homeless.’’

Said Alyssa Klein,19, a sophomore studying chemistry: “Doing this makes me infinitely happier than playing games on the Internet.’’