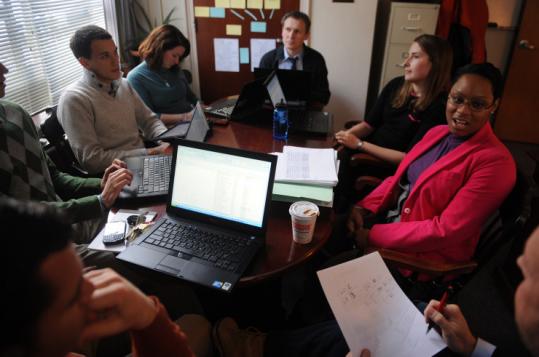 Northeastern University, once a commuter school accepting nearly all Bostonians who applied, received more applications this year than any other major private college in the area, and perhaps even the nation — fueled by a big increase in international students.

A record high of nearly 43,000 hopefuls applied to Northeastern for 2,800 spots in the incoming freshman class — a 15 percent surge of applicants from last year and nearly triple the number from a decade ago, according to university officials, who plan to formally announce the figures today.

While other major Boston-area institutions, including Harvard, Tufts, Brandeis, Boston College, and Emerson, have experienced double-digit increases in applications as high school seniors apply to more colleges, the rise at Northeastern stands out because of its sheer size.

The university, known for its century-old co-op program that gives students full-time work experience, has seen a steady rise in applications over the past four years. But the huge leap this year was surprising and noteworthy, said Philomena Mantella, senior vice president for enrollment.

“It comes down to our relevance as a university,’’ Mantella said. “Experiential learning really resonates with this generation, especially in this economy, with their concerns about job opportunities and getting an edge up. We are just so well positioned for today’s prospective students.’’

The number of international applicants has jumped by more than 42 percent in one year, to 4,438, Mantella said. Last July, the university for the first time hosted an admissions conference for more than 700 high school counselors from abroad.

Another reason for the upswing: The university this year began allowing students to graduate in four years, instead of its traditional five-year commitment — and still squeeze in two six-month stints of on-the-job training — in an effort to attract higher achievers who may be eager to move on to graduate school.

Prospective students, Mantella said, are also lured by the university’s growing global reach and overseas connections, offering more opportunities for students to not only study, but also work abroad. Northeastern’s 15,000 undergraduates have been placed in co-ops in 69 countries on all seven continents, including Antarctica.

Some of the largest increases in applicant interest have been in the emerging fields of behavioral neuroscience, digital arts, health, sustainability, and security — areas in which Northeastern has recently developed degree programs, Mantella said.

College counselors in top area high schools, including Boston Latin and Newton North, say local interest in Northeastern has always been high, but that many universities that used to be primarily regional are now national and international. Added to Northeastern’s list of pluses is the urban university’s spruced-up campus, including new dormitories.

Northeastern is not simply getting more applicants, Mantella said; it has become increasingly selective as the university’s reputation has skyrocketed among a stronger, more diverse pool of prospective students. The academic caliber of applicants has risen, with the number of students scoring more than 1,400 on the SAT jumping by 37 percent. And more African-American and Hispanic students are applying than ever before, university officials said.

Northeastern received applications from 666 high schools that had never previously sent candidates to the school. Most of the rise in US applicants has come from California, Illinois, Ohio, and Oregon.

“Clearly Northeastern has growing momentum, reflecting the stronger global reach that we have,’’ Mantella said. “This increase among applicants who have many choices is really quite exciting.’’

Northeastern’s application increase vaulted it over neighboring Boston University, which, in previous years, was one of only three private colleges in the country, along with New York University and the University of Southern California, that drew more applicants than Northeastern.

USC expects to receive about 38,000 applications this year. NYU will not release its application number until today.

But by no means is BU’s popularity diminishing. This year it attracted its highest number of applicants, 41,700 students, up 9 percent from the previous year. Like Northeastern, BU is also seeing a significant rise in its number of international students as well as students from underrepresented minority groups, along with an increase in applicants’ academic qualifications.

Emerson, too, has drawn a greater number of minority applicants due to a renewed focus on diversifying the communication and performing arts campus in downtown Boston. Last year the college paid for guidance counselors from high schools serving predominantly urban, minority students to fly to Boston and get acquainted with the college’s professors and academic programs, said MJ Knoll-Finn, Emerson’s vice president of enrollment.

It has also begun sending its students back to their own high schools for targeted recruiting. The strategies helped lead to a 21 percent jump in minority applicants over last year, she said.

Applications, particularly at more selective schools, typically go up each year, as it has become easier for students to apply to more schools, using electronic submissions and the Common Application. The College Board recommends that students apply to between five and eight colleges, but in the Northeast, students typically apply to seven to 10 schools, said Richard Doherty, president and CEO of the Association of Independent Colleges and Universities in Massachusetts.

Many of the state’s private colleges are reporting steady application increases, he said, though official numbers will not be collected until the spring.

“I think the reason for it is that families and students just understand that in this tough economy, education matters in terms of being able to get jobs, especially in Massachusetts, which has such a knowledge-based economy,’’ Doherty said.

More telling, in coming months, will be schools’ acceptance rates — and, of those lucky enough to gain admission, how many students actually choose to enroll.